After the forming of Foundation X (exact date unknown)

Conver the residents of Futo City in Necro-Overs.

Remake Futo City in their own image.

The Special Mercenary Force "NEVER" are a group composed of humans who have been revived from death and turned into super soldiers called Necro-Overs and the main antagonists of Kamen Rider W Forever: A to Z/The Gaia Memories of Fate as well as the protagonists of the V-Cinema Kamen Rider W Returns: Kamen Rider Eternal.

NEVER was initially a project initiated by Foundation X researcher Maria Daido attempting to resurrected her son who died from a traffic accident by duplicating the conditions that revived Raito Sonozaki (Philip) after his demise in the source of the true Gaia Memory. The result was the Necro-Over, an undead super-soldier with enhanced strength and endurance. However, they are required to regular injections of a bio-stabilizer to keep their bodies intact. Leaving Foundation X after being rejected in favor of Gaia Memory research for the latter far greater diversity in abilities, NEVER became mercenaries, leaving a path of destruction in their wake to convince the Foundation that they are better than the Museum's "toys".

However, an encounter with Doctor Prospect drove their leader insane and they decided to destroy the Museum by obtaining the T2 Gaia Memories in order to power the X Bicker and convert the residents of Futo into Necro-Overs. Though much stronger, faster and more durable than normal humans, as well as exceptionally compatible with certain Memories, Necro-Overs use Gaia Memories at even greater risk than normal humans, for being struck with a Maximum Drive will cause them to disintegrate. A Scanning Charge, Kamen Rider OOO's finisher, can also cause a Necro-Over struck by it to disintegrate, and they can become destabilized if injected with a bio-stabilizer blocker fluid. This is reversible only if the Necro-Over can be treated with an antidote quickly. NEVER primarily appears in Kamen Rider W Forever: A to Z/The Gaia Memories of Fate, but their origins are revealed in Kamen Rider Eternal. 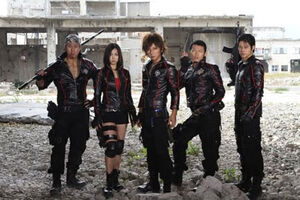 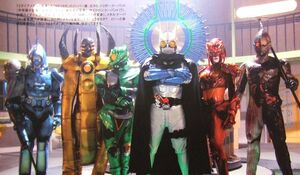 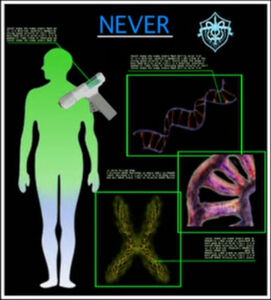