Steal from Mario and Luigi.

Mischievous Thief
Nabbit is an antagonist from New Super Mario Bros U. He also appears as an anti-hero in New Super Luigi U, replacing Mario.

Nabbit is a peculiar purple creature with ears resembling those of a rabbit as well as having the creature's speed. He carries around a big bag with a Mushroom icon upon it for snatching items. He also wears a white handkerchief that bears the illustration of a mouth full of sharp teeth as a mask, resembling that worn by Bowser Jr..

Nabbit steals from Toad Houses featured in the game and appears in seven of the game's levels. In order to acquire necessary stars, Mario must pursue and capture Nabbit in order to retrieve the stolen goods. In each of his appearances, Mario tracks Nabbit throughout the levels in question and catches him. Afterwards, Mario will punt Nabbit out of the level and return the stolen goods to Toad, who will give Mario a P Acorn as thanks. Should Mario fail to catch Nabbit three times, the thief will disappear until the conditions for his reappearance are met.

Nabbit also makes an appearance in enemy stages throughout the game. Should Mario take too long to retrieve his treasure earned for defeating the enemy, Nabbit jumps in and robs it.

In New Super Luigi U, Nabbit appears in place of Mario and appears to be an ally of Luigi's throughout the game helping stop Bowser and the Koopa Troop. However, Luigi still has to chase Nabbit down in the sections devoted to catching him. And even though he seems to be on Luigi's side, it does not stop Nabbit from stealing Luigi's treasure if he takes too long to collect it.

Nabbit can become a costume for the Mystery Mushroom, unlockable by clearing the 100 Mario Challenge on normal or a higher difficulty after a certain number of attempts.

Nabbit appears in the post-game of the Bowser Jr.'s Journey mode in the level "The Best Beast" as a member of the enemy team, only recruitable if Ludwig uses his "Negotiation" Captain Command. He is a ranged unit and his special has him either heal or hurt his allies.

Nabbit plays a major role, in which the Mario Bros. can find him running across the areas that they traverse. Successfully capturing him will make him drop a Bros. Attack. Throughout the game, he will drop every Bros. Attack except for Toad Trail that is obtained after defeating King Bob-omb.

He plays his biggest role in the "Bad Nabbit" mission in Neo Bowser's Castle, in which he must be fought up to three times and face against an enemy with the Mario Bros. three times. When fighting alongside the Mario Bros., he will do up to three actions: jump on a random enemy, feed mushrooms to Mario, Luigi, and Paper Mario each for 60 health, or pairs with Mario or Luigi to kick a Buzzy shell in the same manner as the 3D Red Shell Bros. attack. Once all phases are cleared, he rewards the Mario Bros. the Mega Thwonk Bros. Attack.

Nabbit appears in Mario Kart Tour as a Mega Boss at the end of the Exploration Tour where he has to be raced in Choco Mountain where the player has to get first place in order to win. Nabbit also appeared alongside Cowboy Wario as playable characters in the Wild West tour as a High End character. 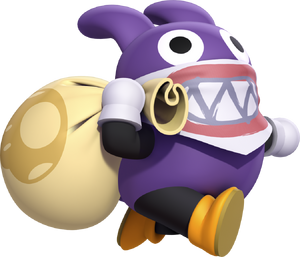 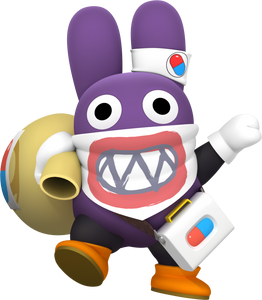 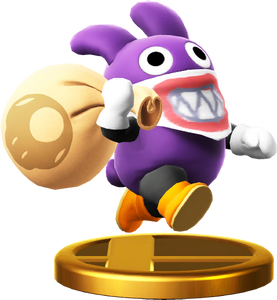 Nabbit's trophy of Super Smash Bros. for Wii U.