Lieutenant of the Juárez Cartel

Working with his dad
Getting payment.

Get Tuco out of the picture. (succeeded)

Kill Hector Salamanca to make sure his father doesn't work in Hector's operation. (succeeded, however not killed)

Ignacio Varga, better known as Nacho, is the tritagonist who appeared in the 2015 spin-off/prequel series, Better Call Saul. Nacho works for Tuco Salamanca in his criminal enterprise and over time has become one of his most trusted men.

He is portrayed by Michael Mando, who also portrayed Mac Gargan in Spider-Man: Homecoming and Vaas Montenegro in Far Cry 3.

After a scam organized by Jimmy McGill and two twin brothers goes wrong, they end up involving Tuco's grandmother. Tuco has Nacho meet with him and his body guards once he takes the three victims to the dessert. Jimmy confesses that he had intended to scam a woman, Betsy Kettleman, whose husband had embezzeled millions of dollars so she would hire him, but the twins made a mistake. After Tuco pressures Jimmy into lying about being a cop, Nacho gets Jimmy to tell the truth. Nacho convinces Tuco to let Jimmy go and kill the twins. However Jimmy convinces Tuco to simply break their legs.

Nacho becomes interested in the Kettlemen's scam and intends to rip them off. He meets with Jimmy in his office and tries to get him in on it, however Jimmy refuses. Nacho leaves, but not before making a subtle threat at him. Jimmy later calls the Kettlemans on a pay phone under the guise of a random informant, warning them that they are in danger.  The Kettlemans then take their kids and escape to the mountains to camp. Nacho is suspected later of kidnapping them and is arrested.

When the police finds Jimmy and escorts him to the station, Nacho maintains his innocence, admitting that he had performed surveillance on the Kettleman home, but did not kidnap them. Nacho warns Jimmy that if he does not get the charges dropped against him the police might uncover his connections to Tuco's criminal organization, which would result in Jimmy's death. Terrified, Jimmy manages to fix the issue and finds the Kettlemans.

After Jimmy rebuts by implying that he warned the family for the children's sake, and that any trouble Nacho got into he brought upon himself. Nacho meets with Mike's absence to his advantage and steals Pryce's personal information from his auto registration, learning that Pryce's real name is Daniel Warmolt. When Daniel's house is later broken into, his baseball card collection and drug money are stolen by Nacho.

Mike confronts Nacho at his workplace where he pretends to be interested in reupholstering his car in order to get Nacho’s attention. Mike   threatens to reveal Nacho’s dealings with Daniel to Tuco. At their regular drug deal spot, Nacho gives Mike $10,000 and returns Daniel his baseball cards, but ends up taking his Hummer to his chop shop to be disassembled. He then declares that his business with Daniel is finished.

When Mike and Nacho meet across the street from a restaurant where Tuco and Nacho regularly collect the money owed from dealers. Nacho reveals a scar on his left shoulder and tells a story of when Tuco and him had a job together. Tuco shot one of their suppliers, who Nacho was behind, lodging a piece of his skull into Nacho's shoulder. If Tuco were to find out that Nacho was working independently, he may have the same fate.

When Nacho meets Mike the next day, Mike says he won't kill Tuco but instead they should land him in prison. Cut to the restaurant, Tuco and Nacho count money given to them by the dealer they're meeting with. After the dealer leaves, Mike, from across the street, calls the police, alerting them of a fight in the restaurant. From inside, Tuco and Nacho see Mike bump into Tuco's car, and Tuco angrily confronts him. As Mike and Tuco's fight escalates, a police siren is heard, prompting Nacho to take the money they collected and leave in his van. Nacho later meets a beaten and bruised Mike and gives him the money he earned. He then asks Mike why he went through so much for less money just to avoid killing Tuco, but receives no answer as Mike drives away, leaving him alone.

Mike arrives at a closed diner where Hector Salamanca, the Cousins, Arturo, and Nacho are at. Nacho pats down Mike before letting him in, sitting behind Mike as he talks with Hector about a deal to get Tuco less jail time. Nacho then shows up at Mike's house later that night to deliver the money decided upon on the deal. Mike splits the pay with Nacho to make up for their failure on the job to take out Tuco.

Nacho calls Mike to a meeting, confronting him about an attack on a driver, Ximenez Lecerda, for the cartel with a quarter million stolen, that he figured had to have been done by Mike. Nacho is in charge of seeing what Ximenez knows, and Nacho is worried that if he knows anything about Mike, it'll be bad for not just Mike, but Nacho himself as well. He eventually realized that Mike was trying to draw police attention to Hector's operation, after Mike asks why it wasn't in the paper, and Nacho takes extreme offense to it. Nacho reveals that Hector killed a passing civilian that drove by the scene and freed the driver. He then leaves an unsettled Mike alone, and drives off.

The following day, Hector flanked by Nacho and Arturo walks into Gus' restaurant and behaves menacingly towards the customers and staff, helping himself to some soda and lighting a cigar. Nacho is collecting drug money as Hector reads a newspaper nearby. Krazy-8 arrives to deliver his returns, but Nacho finds that he has come up short. He initially allows Krazy-8 to leave, but at Hector's prodding, drags Krazy-8 to the back of the restaurant and beats him. That night, while working at his father's upholstery shop, Nacho feels pangs of guilt and injures himself at a sewing machine.

A truck arrives to drop off restaurant supplies, after which Victor and Tyrus retrieve several pouches of drugs from a false bottom in the trailer. Daniel Wormald arrives home to find Nacho sitting in his living room. Nacho asks Daniel to get empty capsules for the specific kind of pills Hector needs for his heart problems, offering $20,000. Daniel reluctantly agrees, saying he can order samples with an R&D request.

Nacho is surprised to find Mike accompanying Daniel. Nacho explains that Hector wants to use his father's business to front drugs, which can put his father in danger. After Mike tells him that Hector and to make sure he switches the pills back if he goes through with his plan. Mike agrees to Nacho and Daniel's exchange once Nacho shows him the money and gives him "one more thing," which Mike pulls out a pad and pen in anticipation of. Nacho goes into his father's upholstery shop and crushes ibuprofin tablets into a fine powder, which he carefully plants in the empty capsules that Daniel supplied him. He then practices slipping the pills into Hector's coat pocket. By the time morning comes, Nacho seems to have it down perfectly. When his father shows up, Nacho claims he came to work early to check on invoices.

That night, Nacho breaks the air cooling unit; the restaurant is hot and sweaty the next day. As Nacho pretends to scrutinize one of the dollar bills in Krazy-8's stack, claiming that it looks "funny" (ie; it looks like it might be marked). Hector asks him to come over so he can scrutinize it. While Hector looks at the bill, Nacho reaches into Hector's coat pocket and removes his pill bottle, which he "accidentally" proceeds to drop. In gathering up the money, Nacho then returns to his seat and grabs the bottle of doctored pills from the satchel containing Hector's rolled-up money bands. He keeps the bottle on his lap while counting the next dealer's money, and is unusually short with him. Once this dealer is gone, Nacho does the switch, switching Hector's real pills for the doctored ones, and then tosses the bottle back into Hector's coat pocket without Hector noticing.

Hector and Gus meet at a remote location, flanked by their respective henchmen. Over a speaker phone, Hector communicates with Juan Bolsa, who tells him that Don Eladio is satisfied with the new "consolidated transportation method" of shipping drugs over the border, and wants the practice to continue using Gus's distribution network exclusively. Hector's heart problems act up, leading him to open the vial containing Nacho's spiked pills. However, the pills have no apparent effect, and Hector curses Eladio, Bolsa, and Gus before leaving.

Nacho, seeing that the pills have failed to kill Hector, goes to his father Manuel's house and comes clean to him. He admits that he fell in "again" with Hector, who will soon be coming to take control of Manuel's upholstery shop. Nacho pleads with his father to do what Hector wants and not do anything "stupid," meaning approaching the police. Manuel refuses and tells Nacho to get out of the house, which he obliges.

Hector, with Nacho and Arturo in tow, arrives at Manuel's upholstery shop. Nacho gives Hector a tour of the property and explains how it will be used for Hector's drug business. Hector approaches Manuel and offers him several hundred dollars, but Manuel tells him to get out of the shop. Nacho tells his father to think about their loved ones, persuading him to take the money. Outside, Nacho tries to tell Hector that his father will eventually come around, but Hector replies that he doesn't trust him.

Nacho sits in his van outside the upholstery shop, with a gun on the passenger seat. When Hector pulls up in his car, Nacho takes the gun and attempts an ambush. However, Arturo and Carlos unexpectedly arrive and prevent Nacho from proceeding. The four watch as Gus and Juan Bolsa arrive to confront them. Bolsa reiterates Don Eladio's position that Gus will take over drug distribution for the Cartel. Hector becomes increasingly enraged, and opens the vial with Nacho's spiked pills. This time, the pills work and Hector almost dies from a heart attack. Gus urges Bolsa to leave the scene as he performs CPR on Hector, saving his life. After Hector is loaded into an ambulance, Gus suspiciously eyes Nacho. 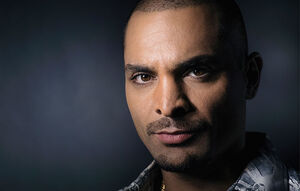 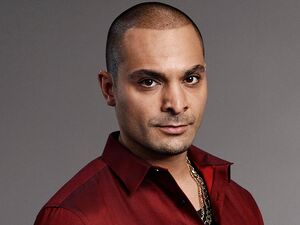 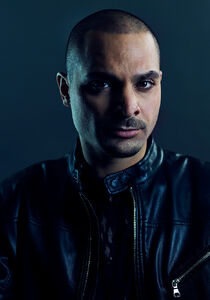 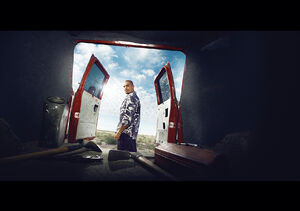 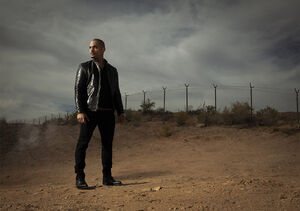 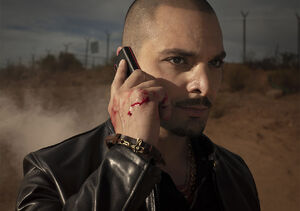 Retrieved from "https://villains.fandom.com/wiki/Nacho_Varga?oldid=3615498"
Community content is available under CC-BY-SA unless otherwise noted.