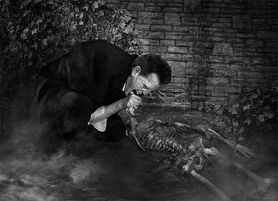 The Nachzehrer is a type of undead creature from German folklore that is similiar to a vampire but also shares traits more commonly associated with ghouls - though in truth the early vampire myths portrayed them as more bestial than the relatively human vampires of modern legend.

The Nachzehrer was created from those who died of suicide or (rarer) accidental death, also in times of plague the first to succumb to death from illness was said to rise as a Nachzehrer - unlike vampires a Nachzehrer was not generally believed to be formed via being bitten.

The Nachzehrer would feast on itself as well as family members and could take the form of pigs so as to visit former family and drink their blood, they could also enter churches and ring the bells to bring death to those that heard them - some tales also believed Nachzehrer could kill via casting their shadow over the living.

The belief in the Nachzehrer devouring itself was likely inspired by people finding corpses that had been partially devoured by scavengers such as rats and those who hunted down these creatures often believed they could be caught via listening for the groaning sounds the monsters made as they munched on their own grave clothes.

It was believed that to kill a Nachzehrer one would place a coin in its mouth then behead it.

Retrieved from "https://villains.fandom.com/wiki/Nachzehrer?oldid=3485078"
Community content is available under CC-BY-SA unless otherwise noted.