Nadine Cross is a fictional character and one of the villains of the Stephen King apocalyptic thriller The Stand. She is a teacher who survives the plague, and becomes one of the many pawns of the novels' main villain, Randall Flagg.

Nadine Cross was born to unnamed parents, and was orphaned at the age of four and later adopted by a couple who loss their son in a car accident. As a teenager, Nadine attempted to have a sexual relationship with boys her age, but some force prevented her, and many saw her virginity has having a purpose. Nadine then went off to college to purse a degree in teaching, and would become a teacher at a private school in New Hampshire.

A teacher at a private school in New Hampshire, Cross has retained her virginity due to a vaguely defined, but powerful, sense that she is destined for something described by the novel's author as dark and unique. After the superflu breaks out, Cross finds an emotionally damaged young boy whom she calls "Joe"; Joe has regressed to a wild state-of-mind and yet trusts Cross and remains with her. Cross meets Larry Underwood when Joe finds him sleeping—Joe is working up the courage to kill the sleeping Underwood, but Cross prevents the murder from happening.

The pair secretly follows Underwood to Maine, where Joe attempts once again to kill Underwood, but is stopped. After talking with Underwood, Cross agrees to join Underwood and find other survivors. Cross is attracted to Underwood but her subconscious conviction that she must remain "pure" has further strengthened and has begun to manifest—Cross begins to both fear and anticipate that she is destined to be with Randall Flagg in some kind of romantic and evil destiny.

Upon arriving in Boulder, Cross begins to surrender to the seductive allure of the Walkin’ Dude and Joe—the latter has sufficiently recovered to the point that he reveals that his real name is "Leo Rockway" and is suddenly unwilling to be in the company of Cross. Later, Rockway reveals that Cross had already known that it was too late to engage in sexual relations with Underwood. Cross desperately proceeds with a final try to seduce Underwood, an act that would break her virginal commitment to Randall Flagg and free her, but Underwood is, by this stage, firmly committed to Swann and rejects Cross' advances.

Cross eventually surrenders to Flagg completely, communicating with him with the use of a Ouija board—an echo of her scary experience with a Ouija board in college, when she was first touched by Randall Flagg. Following his orders, Cross then seduces Harold Lauder and, although she will not do "that one little thing" with him, they are evidently free to sexually engage in any other manner that they wish. Cross uses Lauder for the purpose of an assassination attempt to destroy the committee members. This plot is ultimately hindered by the return of Mother Abagail and Goldsmith's premonition.

Cross travels west with Lauder, but when Lauder's motorcycle crashes, she says that it was her intention for him to die in a motorcycle accident, instead of being killed by Randall Flagg upon their arrival in Las Vegas. Lauder fires his pistol at Cross and nearly hits her, suggesting that Cross may unconsciously prefer death to the dark consummation awaiting her in Las Vegas; and also revealing limitations to Flagg's power. Cross continues on towards Las Vegas, until Flagg appears to her in the desert—Flagg reveals his true nature to her by raping her, an evil experience that is so horrible to Cross, while simultaneously causing her immense pleasure, that she falls into catatonia. Flagg takes Cross with him to Las Vegas and the pair reside in the penthouse suite of the MGM Grandhotel complex; Cross' pregnancy is announced shortly after their arrival in Las Vegas. Cross eventually recovers enough to taunt Flagg about his inevitable failure until, in his anger, Flagg throws Nadine off the penthouse sundeck and she is killed in the fall. Nadine smiles as she falls and afterward Flagg realizes that she had taunted him in the hopes that he would kill her.

In the television miniseries, Nadine Cross is portrayed by Laura San Giacomo. She is an almagation of herself and Rita Blakemoor in the novel. She meets Larry in New York, but leaves him after nearly sleeping with him, later being brought to Boulder by Teddy Weizak.

In the upcoming remake, she was portrayed by Amber Heard. 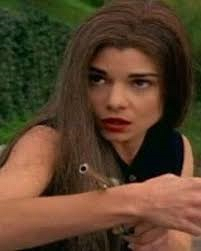 Laura San Giacomo as Nadine in the 1994 miniseries. 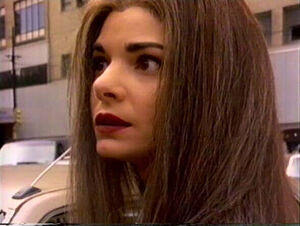 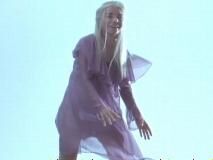 Nadine moments before her death in the 1994 miniseries. 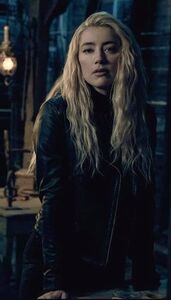 Amber Heard as Nadine in the 2020 miniseries.

Nadine's death in the 2020 miniseries.
Add a photo to this gallery

Retrieved from "https://villains.fandom.com/wiki/Nadine_Cross?oldid=4217751"
Community content is available under CC-BY-SA unless otherwise noted.