Leader and founder of the Doom Beings

Collect the Infinity core and silent core to rule Vestroia.

Power-Hungry Dragon
Naga is the main antagonist of Bakugan Battle Brawlers​​​​​​​. He is the creator and leader of the Doom Beings and Wavern's twin brother. He is Drago's first arch-nemesis (before Dharak).

He was voiced by John Stocker who also voiced King Zenoheld in season 2.

Naga is a skeletal, split-nosed wyvern and dragon-like Bakugan with tattered wings.

Naga and his twin sister Wavern were born during the Great Revolution (the conflict between Drago's ancestor Genesis Dragonoid and Dharak's ancestor Dharaknoid), as they became trapped in the empty space between dimensions and were outcasts due were not aligned with any of the six regions of Vestroia; so they were known as the White Ones. Over the years, Naga grew bitter and cold due to being treated like an outcast for so long.

Naga and Wavern meet Drago when he was able to get across from his Pyrus Space, Drago greets them both, but Naga only cared about himself and was angry for being born powerless. He tried to go to the center of Vestroia to get the power of both cores, despite Drago's warning, but failed and accidentally created the shockwave that caused a strange phenomenon on Earth where cards fall from the sky and the Bakugan transporting themselves to the human world. After Dr. Michael went to Vestroia by accident, they met each other for the first time. Michael explained to him about the Dimensional  Transporter, unaware about his true motives. At last, Naga expelled Michael back to Earth and used a Dimensional Transporter Card he got from him to succesfully enter the center of Vestroia.

After transporting himself to the center, Naga attempted to capture the powers of the Silent Core and Infinity Core, sources of negative and positive energy respectively of Vestroia, by going to them directly and absorbing them to fulfill what he believed to be his destiny. He failed, however, and was unable to control the power of the Silent Core, only being able to absorb the Silent Core after it trapped him inside; after that, catastrophic energy surge was caused due to the huge amount of negative energy was released and the Infinity Core became bonded to his twin sister, Wavern, who was sucked into a portal to the human world.

This disaster caused the negative energy to spill all over Vestroia and the Earth, including the Bakugan on Earth, and he created Hal-G and Masquerade from the unsuspecting Dr. Michael and Alice, who were exposed to excessive negative energy when Naga absorbed the Silent Core. Naga used them both to hunt for the Infinity Core from Wavern and also supplied them powerful abilities like Doom Cards to send fallen Bakugan to the Doom Dimension.

Near the end Naga fought with Wavern until Drago destroyed her, on her request and sent her back to Vestroia as Naga said. Ultimate Dragonoid then took the Infinity Core and became Infinity Dragonoid.

he lost because of Drago's Dextra Attack and because of the bond between Bralwer and Bakugan. and was destroyed (or sent to the Doom Dimension as Bakugan.com said). 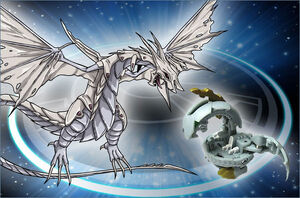 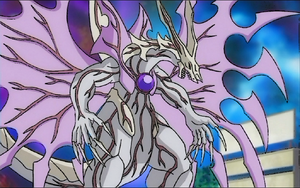 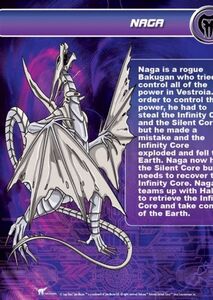 Naga's Bio
Add a photo to this gallery

Retrieved from "https://villains.fandom.com/wiki/Naga_(Bakugan_Battle_Brawlers)?oldid=3855591"
Community content is available under CC-BY-SA unless otherwise noted.