Supreme Lord of the Undead

The Great Necromancer
Nagash the Undying

Turning people into the undead.

Turn all of the world's inhabitant into undead slaves.

Defeat the armies of Chaos before taking over the Old World.

Nagash is one of the main antagonists of Warhammer.

He was the creator of Necromancy and one of the most powerful magic users of all time, capable of wiping out entire armies. Once a mortal, Nagash became a lich, casting aside his flesh and humanity in favor of unmatched mastery over the arcane and eternal existence. His goal is to become a god and turn the world into a graveyard under his control. He has been one of the greatest threats the world ever faced and was only stopped at a great cost each time he rose, never being truly defeated.

Nagash was born in the ancient civilization of Nehekhara as the son of king Khetep, ruler of Khemri. At a young age, he joined the Mortuary Cult and rapidly rose in the rank eventually becoming the High Priest of Khemri. Despite this, he wanted more power and immortality. His chance came when a group of dark elves washed up on the shore of Nehekhara and were brought to him. Nagsh learned from the sorceress of the group the existence of the winds of magic and how to channel them for his own gain. When the sorceress outlived her usefulness, he killed her in a magic duel and consumed her soul. He then proceeded with his plan to take over Khemri by bringing together a group of nobles and gave them the ability to prolong their life and in return they swore to serve him forever.

One day he killed his brother, who had succeeded their father on the throne, and buried him alive. After taking power over Khemri, he started a war against the other kings of Nehekhara. Despite his magical powers, Nagash was defeated and disappeared for a time. During his exile, he founded the fortress of Nagashizzar in the desert and forged many powerful artifacts, slowly gathering his power to take revenge on his homeland.

Many centuries later in Nehekhara, the study of the Books of Nagash by Queen Neferata brought about the creation of the Vampires in the city of Lahmia. When this was discovered by the current King Alcadizaar, he brought his forces against Lahmia to remove the taint of undeath. Despite the efforts of the vampires, the threat of Lahmia was crushed by Alcadizaar's huge army; the Queen fled to Nagashizzar with the six remaining Vampires. Recognising the spawn of his own creation, Nagash made the vampires his captains and sent them back in command of a vast undead horde to conquer Nehekhara. However, he had underestimated his former countrymen. The combined forces of Nehekhara crushed Nagash's forces and forced the vampires to flee before his wrath. Enraged by this defeat, Nagash got his allies, the Skaven, to corrupt the River Vitae; it turned black, spreading pestilence throughout the populace. Alcadizaar was forced to watch first as those he loved, including his wife and children died, and then to see his beloved kingdom crumble before him. When Nagash's undead invaded, their ranks swollen by the dead of Nehekhara, they were led by W'soran and Arkhan, who Nagash had resurrected as a Liche. The meek defenses put up to stop the invasion were easily thwarted and Alcadizaar himself was captured and thrown into a cell to await torture and death at Nagash's pleasure.

He later tries to use a spell so powerful that it would raise all the dead in the world but is stopped by the machinations of the skavens who free Alcadizzar and give him a powerful cursed blade known as the fellblade. Alcadizzar uses this blade to cut Nagash to pieces and then go out in the desert, consumed by madness. But Nagash didn`t truly die and he would return to plague the world of Warhammer again during the Legend of Sigmar, only to be defeated once more.

In the End Times, he comes back again, seeking to absorb the wind of death and ultimately the Chaos Gods themselves to become a god. Though initially successful, having consumed some of the other races` gods of the afterlife, his plan suffers a massive setback in his battle in Sylvania against a force of chaos daemons when skavens blow up his black pyramid, which was used to amassed magical power. This forces the Great Necromancer to ally himself with the forces of Order to prevent the world’s destruction.  In the final battle at Middenheim however, the champions of the Old world fail and the world is destroyed by Chaos with Nagash last being seen stripped from his magic and his body crumbling to dust.

He returns somehow in the Age of Sigmar, having consumed all the death gods and becoming the sole god of the afterlife. Initially joining the pantheon of Sigmar and working with the other gods against the invasion of Chaos, he later betrays them and retreats to Shyish, the realm of death. This treachery allows the forces of chaos to crush all resistance and invade all but the realm of heavens. Even Nagash’s domains are all but conquered and The Great Necromancer himself his struck down by Archaon. Returning back to life after his defeat, he is currently amassing his power in a sub-realm to retake what is rightfully his.

Even as a mortal man, Nagash had a total lack of empathy and respect for anyone but himself. He was more intrigued by the Dark Elves' magic spell that killed his father rather than mourning him, he entombed alive his brother out of jealousy and stole his wife the day after and killed his Dark Elf captives and absorbed their souls after they taught him their dark magic.

He was also skilled at manipulating people, he was able to set himself as a god to the mountain tribes and make them build the city fortress of Nagashizzar, as well as gathering a rebel army to overthrow his brother and make them fight amongst themselves to see which one is the strongest servant.

After becoming a lich, his sense of self-worth and sadism grew worse, forcing the then king Alcadizzar to watch as he poisoned all the people of Nehekhara and then turned them into undead in a great ritual. His ultimate goal is to usurp the Chaos Gods and turn all the living creatures of the planet into his undead minions.

During the End Times, after he was forced to join forces with the side of Order, he turned survivors of Middenland from a Chaos incursion into zombies after Arkhan suggested to spare them as a gesture of goodwill towards his new allies. He then mocked Alarielle and Tyrion, telling them that their deceased daughter's soul is fodder for Slaanesh.

Nagash is very patient, although it has a breaking point. Because he is immortal and a master strategist he knows that he can play the long game far better than others. But he will not tolerate the countless attempts of the gods of order to deny him what his right according to a deal he set with the Pantheon of Order, the soul of every mortal that dies in the Mortal Realms. Knowing that the gods of order would eventually break this deal with him he made a plan to reign supreme across all the realm, a plan that ran from the Age of Myth, throughout the entirety of the Age of Chaos and would only come to fruition in the Age of Sigmar. 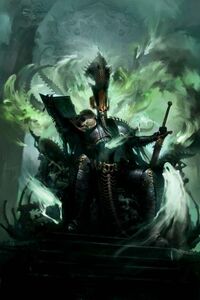 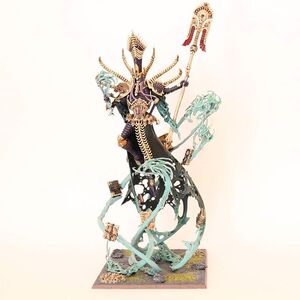 Supreme lord of the undead. 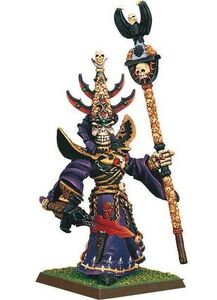 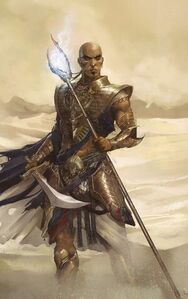 Nagash when he was human. 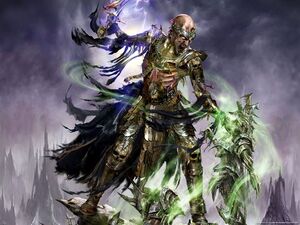 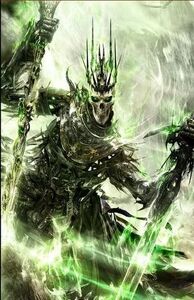 Nagash in Age of Sigmar.