The Snake Girl
Bathilda Bagshot (when possessing her body)

Venomous fangs that cause perpetual bleeding

Killing her victims (as a snake).

Defeat Gellert Grindelwald and his army (as a human).

Aid Lord Voldemort in his goals (as a Horcrux).

Her past story as a human is uncovered in Fantastic Beasts: The Crimes of Grindelwald, where she is portrayed by Claudia Kim.

As a human, Nagini was the opposite of the monster that she became known as. She was very kind and caring towards Credence Barebone and did not want to see him join Gellert Grindelwald. By the end of The Crimes of Grindelwald, Nagini along with Newt Scamander, Tina, Jacob, Yusuf, Theseus, and Albus Dumbledore all became committed to defeating the Dark Wizard.

As a snake, Nagini was completely loyal to Lord Voldemort. While she remained aloof, if not malevolent, to most others, she obeyed Voldemort completely, and seemed to enjoy being close to him, as she often slithered up to his shoulders to receive his affection.

She was also shown to be very intelligent and was able to understand the concept of strategies and plans, as seen when she set up a trap for Harry (which may have been due to her possessing a portion of Voldemort's soul) by disguising as Bathilda. She was rather cunning and deceptive, and seemed to have understood how humans behaved. The prequel film, Fantasic Beasts and the Crimes of Grindelwald revealed that Nagini herself was originally born as a human before became a snake she is now as result of blood curse.

Not much was known about Nagini's early life or when she was acquired by Voldemort. Originally, Nagini was a human Maledictus woman capable of transforming herself into a snake. In 1927, she was a featured attraction in a Wizard circus owned by Skender, where she became friends with Credence Barebone. She helped him learn who he was and accompanied him to Grindlewald's meeting where he revealed his plans. After Credence joined Grindlewald, she decided to help the other heroes defeat Grindlewald.

Finally, her blood curse turned her into a snake. It was stated that in the woods of Albania, the phantom-like form that was the remnants of Voldemort had befriended many animals, yet only snakes could bear having him inhabit them, thus leading to the notion that Voldemort and Nagini's relationship had originally commenced in Albania.

Since acquiring her, Voldemort used Nagini to help him regain strength and a basic physical form after living in a weak and spectral state, following his ill-attempted murder on an infant Harry Potter. He had the servant who returned to him, Peter Pettigrew, milk her venom, and with it, create a potion that sustained him with a temporary body until he could regain his true form. Nagini further kept Voldemort alive after he turned her into a Horcrux, with the murder of Bertha Jorkins. In 1994, he was as attached to her as he could of any living creatures, and her underlining of his heritage to the legendary Salazar Slytherin only furthered her mystique to him. His habit of keeping her unusually close to him was what led Albus Dumbledore to suspect that she had become a Horcrux for quite sometime.

In the fourth book, Nagini, along with Voldemort and Pettigrew, sought shelter in the abandoned Riddle House until they could instigate the plan to capture Harry Potter via botching Triwizard Tournament. Nagini alerted Voldemort to the presence of Frank Bryce, an old Muggle gardener who had worked for the late Riddle family, who had overheard a discussion between Pettigrew and Voldemort. Soon after, Nagini slithered past Bryce and alerted Voldemort, and the Dark Lord murdered the Muggle man.

Upon Voldemort's rebirth via the capture of Harry, Nagini was slithering around the Little Hangleton graveyard where the ceremony took place and was promised that she could feed on the boy's corpse after her Master had killed him. She was deprived of this promise when Harry escaped, however.

In the fifth book, Nagini was presumably sent by the Dark Lord to retrieve a Prophecy in the Ministry of Magic. After she had infiltrated the area, Nagini met up with Order of the Phoenix member, Arthur Weasley, who was sent to guard the very same Prophecy. Nagini, unable to resist, and who had attracted Arthur's attention already, attacked him. The attack was witnessed by Harry in one of his dreams, and felt that he (Harry) was the snake. Critically injured, Arthur was taken to St Mungo's. He survived the attack, but was scarred as result. The reason that Albus Dumbledore believed Harry saw the vision as if he was the snake was due to Harry’s special connection to Voldemort, with Harry’s witnessing the attack by virtue of the fact that Voldemort’s mind "happened to be" in Nagini at the time. This was the first indication of Nagini and Voldemort’s deeper connection, having the ability to share thoughts and connect with Harry (which in the final book confirmed that Harry accidently became one of Voldemort's Horcruxes through the ill-attempted murder on him when he was still a baby).

In the seventh and final book, Voldemort uses Nagini to possess Bathilda Bagshot, who was killed earlier. He knew that Harry Potter was coming to Godric's Hallow. Later, Harry indeed arrives at Godric's Hallow with Hermione. Nagini, in Bathilda's body, brings them to Bathilda's house and takes Harry upstairs into a dark room.

There she contacts Voldemort and Voldemort tells her to keep Harry with her. Nagini then bursts from Bathilda’s corpse and tries to attack Harry, who ends up receiving a puncture wound to the arm. Later in the same book, Nagini is killed by Neville Longbottom during the Battle of Hogwarts. Neville did this since Harry ordered him to kill Nagini because she was the last Horcrux remaining.

Nagini is also shown to be responsible for the death of Severus Snape, after Voldemort ordered her to kill him. 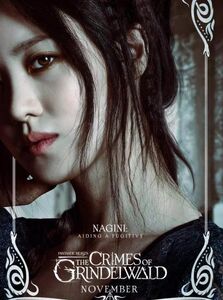 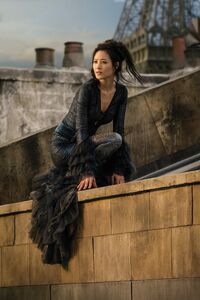 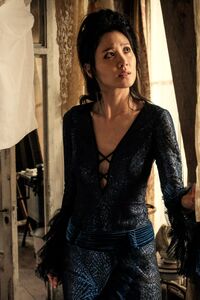 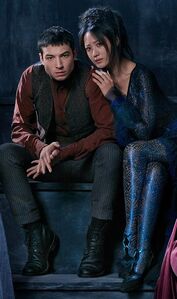 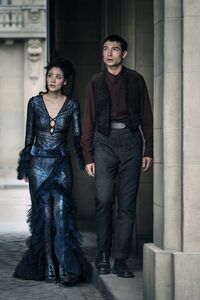 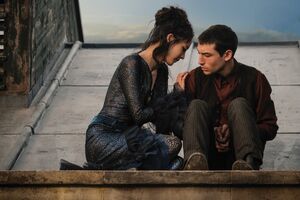 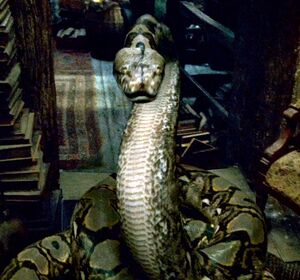 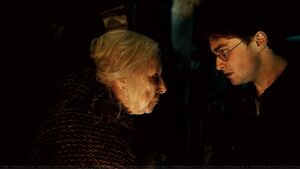 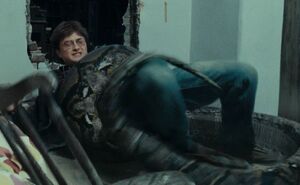 Nagini wrapping Harry Potter up in her coils. 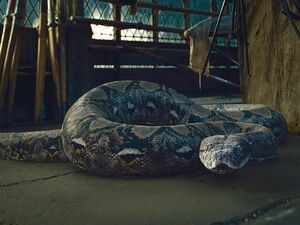