Spread the hope to encourage people.

He was also the secondary antagonist of Danganronpa Another Episode: Ultra Despair Girls where he served as the Servant for the Warriors of Hope. His Servant persona made a cameo appearance in Side: Future.

In Danganronpa V3: Killing Harmony, it is revealed that he, along with every other character from the previous games, is actually a fictional character within the Danganronpa universe.

He is voiced by Megumi Ogata in the Japanese dubbed version, and by Bryce Papenbrook in the English dubbed version, both of whom also voiced Makoto Naegi in their respective versions.

Nagito was once a student in Hope's Peak Academy's Class 77-B. After being brainwashed by Junko Enoshima, Nagito and his classmates succumbed to despair and became part of Ultimate Despair.

After Junko's death, Nagito became the Servant for the Warriors of Hope as well as a member of Remnants of Despair listed by the Future Foundation, trying to make Monaca Towa carry on Junko's legacy. He cut off the left hand of Junko and attached it on his left wrist so that he could claim himself to be a man who conquered the leader of Ultimate Despair. He was later captured by the Future Foundation and sent to the Neo World Program to rehabilitate him from Ultimate Despair's influence.

At first, Nagito got alone well with his classmates in the program. Under Monokuma's effect, however, he became a liar as well as someone with ambiguous morality who interfered in class trials frequently, causing great despise of others as the story progressed.

After discovering the horrible truth behind the Neo World Program in Danganronpa 2, Nagito sacrificed himself in order to kill the Remnants of Despair. He set up a "suicide" to cause Chiaki Nanami, the traitor and not a Remnant of Despair, to unknowingly deal the killing blow, and therefore become the blackened. However, the remaining students discovered his plan, and Monokuma executed Chiaki instead.

After his death in the Neo World Program, Nagito fell into a coma on Jabberwock Island, along with his classmates who also "died" on the Killing School Trip. He and the other comatose students were eventually revived. He later appeared as the protagonist in a 30-minute long OVA called Super Danganronpa 2.5: Nagito Komaeda and the Destroyer of the World.

In Side: Hope, he and the former member of Ultimate Despair helped the Future Foundation in stopping Ryota Mitarai's effort to brainwash the world with his brainwashing Hope Video at the Future Foundation headquarters. With his classmates, Nagito decided to atone for his sins as one of the the former Ultimate Despairs and resides in Jabberwock Island.

In Danganronpa Another Episode, as the Servant and Ultimate Despair, Nagito is even harder to read and rarely lets his true intentions and emotions show. The official limited art book describes him as "quiet, soft-spoken and effeminate". Despite being Ultimate Despair, he does not seem directly dangerous and appears to be nonviolent, rather he manipulates and works behind the scenes. He is also mentioned to be in rather high spirits despite being essentially a slave, smiling most of the time and having a carefree, sometimes disturbing laugh. He receives the mistreatment from the Warriors of Hope with a smile and sometimes even seems to enjoy it (his official profile states that he might be a masochist).

In general, he appears unusually calm to the point of being apathetic, and is rather unfazed by the disturbing things happening around him (however, he does appear to feel uncomfortable when Monaca Towa forcibly kisses Nagisa Shingetsu.) He is generally polite and collected, but he may appear insensitive at times or lose his composure when talking about hope. He has a habit of forgetting how he is supposed to act as a servant and he seems to misunderstand orders quite a lot, though these may be passive-aggressive acts done on purpose. All the food he makes is inedible with very nonsensical ingredients (for example, in 2014's Christmas tweet, he is asked to make Bûche de Noël, but instead he makes some sort of cake out of nothing but whipped cream and pinecones).

The Servant calls the story's situation a game several times, such as calling Komaru a "generic game protagonist" and mentioning game-balancing and defeating of the final boss. This may seem like breaking the fourth wall, but it actually refers to the Demon Hunting, which according to the Servant is also a game to incite Komaru's growth. Unlike his past self, the Servant believes in the potential of the talentless, because such "weak" people succeeding and rising up from despair would create even more hope. It's possible that his opinion changed after Makoto, a "mere" Ultimate Lucky Student, defeated the true Ultimate Despair and became Ultimate Hope.

The Servant's main goal is to help to create a happy, hopeful world, but one born from absolute despair, going so far as to assist his own enemy and start a war for the sake of this goal. As a result of brainwashing, he has a twisted disturbing obsession with Junko Enoshima. However, it seems the brainwashing affected him differently than everyone else, as he also retains his hatred for Junko and his love for hope. He also seems to be more aware of what he is doing while being brainwashed, which ironically seems to make him the most sane out of the class. Though, it should be noted that while he is still doing everything for the sake of hope, his plans are even more dangerous than before. However, after his brainwashing was undone, he appears to have abandoned his harmful ways. He is shown to be in peace with his classmates, possibly finding the bond with them the "true hope", just like what he learned during the ending of the Island Mode. 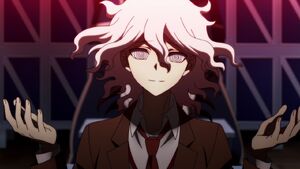 Nagito after falling into despair. 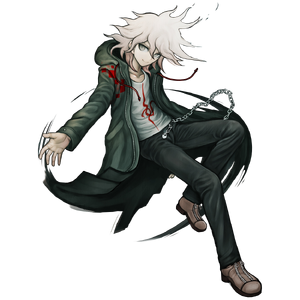 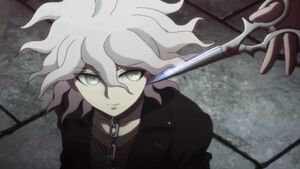 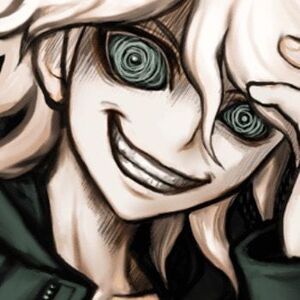 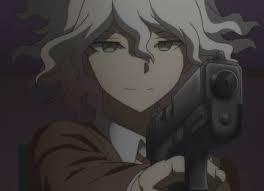 Retrieved from "https://villains.fandom.com/wiki/Nagito_Komaeda?oldid=3399411"
Community content is available under CC-BY-SA unless otherwise noted.