Causing pain and suffering to everyone who enters the Old Manor.

Feeding of human bodies and controlling his spirits.

Absorb the souls of three pure children and become eternal in ritual and govern Puebla city.

Rule the undead and devour the living.
Kill and destroy the San Juan family (all failed).

The Nahual, also known as La Nahuala in their disguised/possessed form, is a powerful and evil entity and the titular main antagonist of the Mexican animated film made by Animex Producciones La Leyenda de la Nahuala. Years ago it took over the body of a cook woman, to carry out the planned sacrifice of 3 pure young souls, so could reign in the world of mortals and become unstoppable in Puebla.

She is voiced by Ofelia Medina.

Nahuala was very ruthless. She had no care for anyone but herself, she had no qualms with using people as slaves and murdering even children. She shown absolutely no remorse for her vile actions such as murders of Xóchitl and Teodora Villavicencio, with her only real regret being not killing Toñita San Juan once and for all. Nahuala is a master manipulator, as she was able to manipulate Santos Machorro into being the primary worker, doing much of the dirty work while she rested in the manor. Nahuala attempted to turn Leo against his brother, but his kind heart stalwart and he refused to turn his back on Nando.

Similarly, it is seen as a type of canine without skin on the body, with a redhead, hairy on the back, and two extensions that look like snake tails, and their eyes are purple. In his pointy ears he uses gold-pierced hoops, occupying some bracelets of the same material, around the neck they decorate a pile of orange artificial feathers with yellow, and others more from behind, but these are authentic (This would be known as the animal form of Nahuala).

Its humanoid appearance has the aspect related to a jaguar with orange skin, slim body, bright red eyes, and claws with elongated fingers. In his clothing, he has gold bracelets, the same feathers and rings as in his previous form, although now she walks with a few tattered skirts, without her feet showing.

By having Mrs. Machorro's body she shows her medallion, and in the decades that are passing her clothing is deteriorated, putting on a rosy brown tone poncho, a transparent violet veil, golden bracelets and pendants. In its physical aspect, it indicates traces of old age, its hair is in a ragged and disordered state.

His origins were never revealed, however, at the beginning of the story, Nando San Juan told his brother that the witch (transformed into a canine) was looking for human bodies to possess the most indicated, thus completing the phase of their ritual, being eternal to enslave the spirits and kill the citizens of Puebla. It follows that this witch has belonged to a clan of Nahuales since ancient times, because according to his own words, he said in the ritual, name others of his ancestors and seemed to indicate that they served the goddess Meztli.

A long time ago, in the mansion called The Old Manor, an evil being of darkness took the body of a kind, innocent cook woman, who was a mother of little Santos Machorro and that was when unleashed chaos inside the property, cursing wing family Villavicencio in the Night of the Dead (Noche de Los Muertos), so knowing that within the home waited wing now renamed The Nahuala, being by sacrificing innocent souls to 3 with the Medallion of Miquiztli. At that moment, Toñita San Juan managed to escape alive from the mansion, unfortunately leaving Xóchitl Ahuactzin and Teodora Villavicencio as wandering spirits.

Outside the priest Friar Godofredo and Aztec sorcerers, they fought the monster with the crucifix and the skull of Tezcatlipoca, limiting their powers with the mirror that reflects it. Thus, his only exit was to unite with the property, seizing it until the coming "new fire". consequently, they sealed the place with planks and red marks, forbidding the passage so that no one would suffer the same fate of being murdered. Next to a heartbroken sobbing Machorro for his lost mother, so the place would be cursed for life until this day.

In representation of this macabre event, they named the crossing that leads to the mansion as the "Calle de la Nahuala", because it is there where it appears to collect the lives of residents in Puebla.

Fifty-two years later the story was told as soon as the generations passed, but Toñita San Juan and Friar Godofredo had preferred not to give clues to the subject, forgetting everything that happened in that enchanted place, while many alleged to see things out of the ordinary. Nando in nowadays tells his brother Leo, stories referring to Nahuala to scare him, even make him believe that he becomes the well-known "old woman" who attends the Convent Temple of San Francisco, waiting to capture him.

When Leo San Juan was sent to deliver a custom sweets and candies, he was surprised by his prankster brother, Nando, continuing scaring with the legends of the Nahuala, deciding to delve into the entrance of "The Old Manor" to be finally kidnapped by the gigantic witch's hand. Frightened by the scene he saw, he went to the bakery without saying anything to his grandmother and nanny. Instead, he preferred to go sneakily to tell Friar Godofredo the facts if there is a way to rescue Nando. The priest told Leo about the arrival of the witch to the manor, confessing that her grandmother was one of the victims she would require for the ritual, escaping from there alive. This he had told the boy, because he had faced the Nahuala with the help of three indigenous warlocks. Leo decided bravely to enter through a small door, access not rest until to save his beloved brother. Behind of the trail of Leo, Godofredo had been kidnapped by Santos whose aim was to avenge the disappearance of his mother after the events of 1755, so he had captive sure not to interfere in their plans.

The Rite Must Continue

Down the hall, he meets Xochitl, who tells him about the machinations of La Nahuala and his desire to want absolute power. Reaching the kitchen holding hands, a shadow of Nahuala herself watched them, causing sharps to attack them, and lava emerged from the pot. Luckily Xochitl saved Leo from leaving the door unharmed before the shadow grabbed him.

After moments of misfortune with guests of the mansion, The Nahuala summons the spirits of Xóchitl and Teodora to complete the rite, taking them to the upper floor of the manor. Before leaving Xóchitl, she tells Leo that he is the only one who can stop this horror, so the boy followed her into a hall full of mirrors. Finally, encounters face to face with La Nahuala and this tries to convince him to abandon hopes of rescuing Nando, but Leo was not intimidated by the threats of the ruthless witch. Unexpectedly Nahuala would attack the boy between the mirrors in which was reflected, opening a secret entrance that takes him to a library, meeting Alebrije and Don Andrés who confuse him with Nahuala at first. Passing the three difficult tests, Leo proved not to be the evil witch, so Alebrije revealed to him through his eyes that destroy the medallion with the "creature of evil" and thus defeat La Nahuala.

Leo falling into a secret passage in which would lead to the last upper floor of the mansion, which surprisingly was captured by the Nahuala and would have prepared for the ritual.

Toñita sees that his two grandchildren do not return home for hours, and with the active Popocatepetl volcano, he got the impression that captives by the wicked witch, and those signs indicated that that same day is "new fire" again. The Grandma and Dionisia they came to rescue the brother's San Juan, entering by the force on the manor, but was also knocked out by Santos wing mercy of Nahuala.

The full moon reflecting its light the main hall, the Nahuala is prepared to conclude his ritual, luckily the air balloon Friar Godofredo completely blocks the light caused by the moon, in the interference "The Priest" faces Santos a tough battle after the two fall dying by the rays of the Nahuala and being to be betrayed Santos, telling him all these years was not the spirit of his mother, but he had taken his way to learn that the son of this woman was full of resentment, using as its accomplice and complete the mission to bring an important member of the San Juan. Recovering from the hard confrontation kept surrendering to anything, it Nando distracts wing beast with the "Miquiztli Medallion" and throws wings hands of Leo which makes use of this with the mysterious amulet named "Skull of Tezcatlipoca", given by Godofredo, combining their powers reverses the Nahuala's curse and turning it into stone, releasing all souls tormented by it.

Being able to end the witch's curse, Friar Godofredo at last, can rest in peace knowing that Leo saved the city from a terrible fate. A few moments later, covered with a sheet, the two sugar skulls frighten Nando making him believe that La Nahuala would return for revenge, in a joke mode.

La Nahuala has no physical appearance but is present in a recapitulation of the film's opening theme, in which Leo San Juan enters the Old Manor to save Nando and foil their plans.

The Father Tello had learned that Leo with the support of his friends were able to defeat La Nahuala and restore peace to Puebla. Send a letter to Friar Godofredo, so his team, after finishing reading it for him, stated that freeing Xochimilco from La Llorona would not be so easy.

She is mentioned again when the ghost-hunting team tells Luis about being the ones who defeated her. Going to the Guanajuato market, Luis names La Nahuala and tells Leo that it is not so surprising to have fought with her with La Llorona; for being women.

To reveal the person responsible for the resurgence of the mummies, the heroes go to the shaman Tzulik who has a vision where La Nahuala appears.

As in the movie, the Nahuala fulfills the same role of antagonist and its appearance is more changed, similar to that of a dark wolf and dressing with a simple hood.

The other legends that Leo San Juan has faced, also mention them, although it is she who is mainly referred to by the choristers in the song of the final act. Leo and Nando they tell their story of how they took over the Manor, describing the events that take place after 8 p.m.

In this film nobody is referring to it, but it is present in the opening song, seeing stalking the Manor.

It is only mentioned by Leo when he wants to show the Charro that she was bold enough to stop her, after not taking it seriously in making a deal with him because of her age.

One of the objects scattered in the "Black Fair" by the Charro, was nothing more than the Miquiztli Medallion (possession that was in the hands by Nahuala in the first movie), guarded by a Caterpillar Woman. 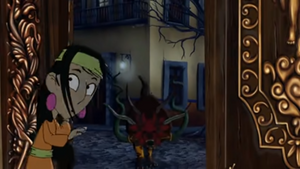 Nahuala in the foot of the entrance to the Old Manor,. 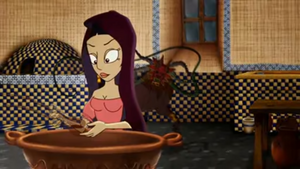 La Nahuala in his "animal form", waiting to take the body of the Villavicencio's cook and continue with the next step of her plan. 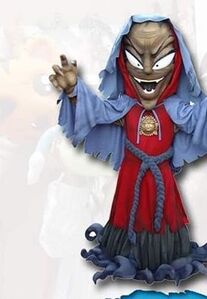 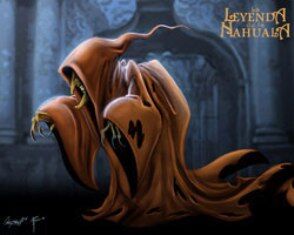 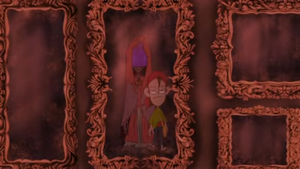 La Nahuala talking to Leo from a painting that quits saving Nando and leaving for his own good. 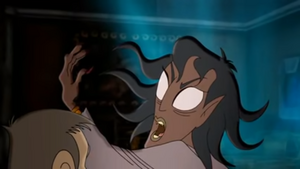 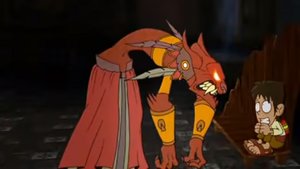 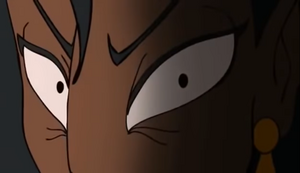 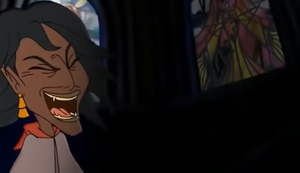 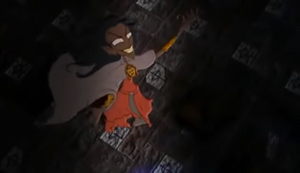 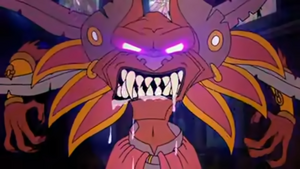 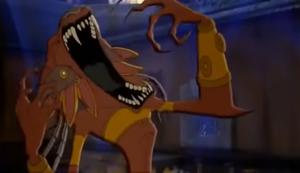 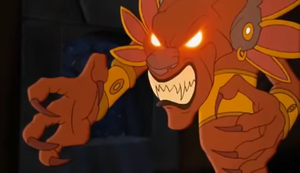 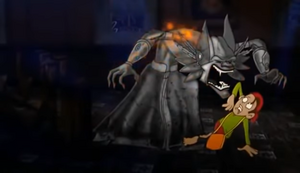 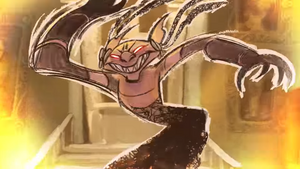 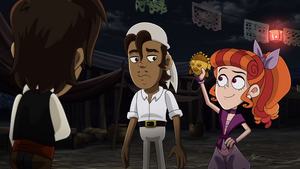 Teodora with the Miquiztli Medallion.
Add a photo to this gallery 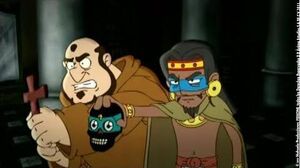 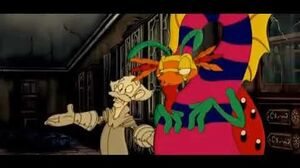 Retrieved from "https://villains.fandom.com/wiki/Nahuala?oldid=4122647"
Community content is available under CC-BY-SA unless otherwise noted.