Nail Ripper is a monster from the second episode of Higurashi no Naku Koro ni Kira, Ayakashisenshi-hen. It is one of the Ritual Tool Devils, monsters created from torture devices by Tokyo Magika in a world parallel to the franchise's main Hinamizawa, which they are using as a testing ground for the monsters themselves.

Nail Ripper made its first appearance when a brainwashed Keiichi Maebera summoned it to attack Rika Furude and Satoko Hojo. The two little girls got scared by the monster and ran away as fast as they could, much to the surprise of both the monster and Keiichi (the girls didn't know the man who attacked them was Keiichi until later in the episode due to the oxygen mask he wore over his head).

Nail Ripper later reappeared when Keiichi summoned it again to attack the two girls and Satoko's older brother Satoshi. After it destroyed the girls' house, it, along with Keiichi, chased after the three until they were trapped between both the two and a mob of Hinamizawa civilians that were brainwashed and made hostile by the fog earlier. After Satoshi became effected by the fog since he took off the mask after having knocked out Keiichi, Rika transformed into Oyashiro Rika and reverted everyone, including Keiichi, to their old selves while defeating Nail Ripper. Just while Rika then pondered that there wouldn't have been any problems had it been easy in the Hinamizawa that she came from, she, Satoko, and the fairy version of Hanyuu were attacked by Miyo Takano, who used her powers to enlarge and transform Nail Ripper, entering a sarcophagus embedded in its chest and destroying the fog in the process.

Rika lured Nail Ripper to the Furude Shrine and attempted to attack Takano to no avail. Nail Ripper began firing lasers everywhere and would've wounded Satoko with one of them if it weren't for Rika leaping in the way of the laser that was headed for her. Nail Ripper was about to finish off the girls and kill them both with one last laser on Takano's command when Satoko wished for the power to protect everyone, causing Hanyuu to create a staff that allowed Satoko to transform into Trap Satoko. After helping Rika back up, the two teamed up and easily overpowered Nail Ripper together to Takano's surprise and frustration. Satoko eventually created a pitfall trap underneath Nail Ripper's foot causing it to fall into it. Takano became horrified as Rika and Satoko unleashed their final attack on the monster, the 07th Explosion, destroying Nail Ripper in a massive explosion and sending Takano flying into the sky, screaming "Sorry, Brother!" all the way just before a twinkle was made in her place.

While Nail Ripper was also a non-living torture device used by the Sonozaki family of yakuzas to make Shion Sonozaki rip off her own fingernails in the original Higurashi series as punishment for falling in love with the son of a man who offended the family, it made its full-fledged monstrous appearance in Ayakashisenshi-hen. This monster was humanoid in appearance when it first appeared in said episode of Higurashi Kira. It used a bat similar to Keiichi's and Satoshi's metal bats. Just like any Toku monster, Nail Ripper was also able to enlarge itself under the influence of its creator. In its enlarged form, Nail Ripper was gorilla-esque in appearance and its eyes became circles. It had the ability to shoot lasers from its eyes in this form, just like all Ritual Tool Devils do. 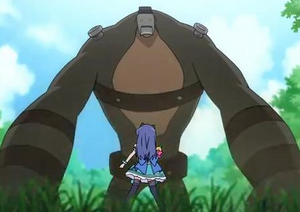 Nail Ripper as a monster in Ayakashisenshi-hen.
Add a photo to this gallery

Retrieved from "https://villains.fandom.com/wiki/Nail_Ripper?oldid=4131054"
Community content is available under CC-BY-SA unless otherwise noted.