Naiyo Kapaja is an otter-themed Gangler Monster and she is the main antagonist of episode 13 of the 2018 TV series Kaitou Sentai Lupinranger VS Keisatsu Sentai Patranger. She is also equipped with a scroll-like treasure called Le rock du bagne.

She was voiced by Satomi Arai.

Naiyo Kapaja's head is a purple otter with a baby red otter with green eyes in its mouth, her hair is orange and she has a flower on her head like a kappa, her cape is red and gold and her Gangler safe is on it, her pants are blue, her brown wood armor is on er blue arms, her purple hands has red finger nails, her feet are purple otter feet with red toe nails and she has a purple otter tail, her weapon the Cukanmar is a green cucumber kusarigama with a green kappa head for a ball.

Naiyo Kapaja made her first appearance in the Back World at the Gangler's Mansion when she'd declared to take the position of Goche Ru Medou and once Dogranio Yaboon grants her request that she had set off to the human world.

Speaking of which she had arrived at an amusement park on top of the Swing About ride and used the power of the scroll to trap the people in the amusement park and to prevent the others to come in however unknown to her the cop and police are already in the park. She'd then battled Patren3gou and Lupin Yellow in a Haunted Hospital attraction ride. However due to the girls bickering with each other Naiyo tossed her chain at the two trapping their arms like handcuffs which make things much easier to battle them and knock them out of their transformation, but thanks to their teamwork they trapped Naiyo in the room.

A while later Naiyo was outside of at a factory searching the cuffed duo and battle them, but during the fight she'd accidentally freed them after that they transformed and fight Naiyo. When she used her finisher Cucumber Scythe Crash on Patren3gou she had thought that she'd defeated her which left with Lupin Yellow to battle with, but she would let her guard down when the cop is still standing and once Naiyo has her back turned towards the cop Lupin Yellow gained access to Naiyo's safe (which her password is 9-0-4) and stole Le rock du bagne (which translate as "Jailhouse Rock") Scroll after that she was taken out by a bladed boomerang that's been thrown by Lupin Red. 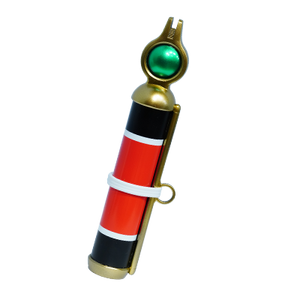 Retrieved from "https://villains.fandom.com/wiki/Naiyo_Kapaja?oldid=3902688"
Community content is available under CC-BY-SA unless otherwise noted.