Avenge Yamori (both formerly).
Find out who killed Yamori (succeeded).

He is a ghoul who was once rescued by Yakumo Oomori and has since than become hid right-hand man and is one of the Executives of the Aogiri Tree. After some time has passed, Naki is able to rise through the ranks of the Aogiri Tree, become and Executive of the organization, and has gained a massive following within Aogiri to form his own little group known as the White Suits for his distinctive style.

He was voiced by Hiro Shimono in the Japanese version, and Josh Grelle in the English version.

Naki grew up in the 13th Ward where he wandered around and fought against other ghouls from time to time. One day however, he had ran into the ghoul Yakumo Oomori and challenged him to a fight despite not knowing who he is. After loosing the fight, he begged Yamori to spare his life and he granted Naki his wish. Naki was then taken under Yamori's wing and joined the Aogiri Tree later on. Naki had helped Yamori with his earends and earned his trust and liking.

In the Tokyo Ghoul √A anime series, Naki appears where he is in a prison truck and is bound for the Ghoul Detention Center and is guarded by a large group of CCG Soldiers. Ken Kaneki and Ayato Kirishima then lead a small group of Aogiri Soldiers and desotry the convoy and free Naki. Naki originally freaks out and goes ballistic but eventually calms down. Once the Aogiri Tree makes it to Cochlea, Naki is seen with his guards as both he and a bunch of Aogiri Troops all fall down and land softly on the upper level of the prison. Naki kills two guards with his kagune that he manages to lash out and eventually goes around the prison some more before running into Akira Mado. He fights her, only to have Akira stab him and force Naki to go insane. Naki then bites off a part of Akira's leg and is then bashed by Koutarou Amon. Gagi and Guge then pick him up and escort him out of the prison.

Naki is seen with his partner Matasaka Kamishiro as the two of them break into Kanou General Hospital in search of the mad doctor Akihiro Kanou during the Aogiri Tree's hunt for him. They kidnap the nurse Taguchi but then runs into Kaneki and his group who are also searching for Kanou. Naki looks at Kaneki and finds out that he is the one who killed Yamori which causes him to break down. Naki and Sachi then engage Kaneki's Group in a fight as Naki and Shuu Tsukiyama had a short brief fight before leaving off with the nurse successfully. He appears again later on where he is with Eto while Tatara interrogates Taguchi on the whereabouts of Kanou.

Later on after Kanou's Laboratory had been discovered, Naki breaks into the building where he interrupts the fight between the Yasuhisa Sisters and Tsukiyama. Naki then yells at Shuu on how he had damaged Naki's suit the last time the two of them had fought and that he would be the one to claim Kanou and called him a Mad Scientist. During the brawl between Naki and Tsukiyama, various Ghoul Investigators and CCG Soldiers had arrived and began to break into the building which forced the two to form a temporary alliance to prevent the CCG from killing them. He then fights Amon and is able to overwhelm him but is knocked down by Akira and is his with an RC Supressant Grenade. Despite being unable to use his kagune, he would allow the twins to die and took a bite of Akira's leg before Amon slammed him across the floor and was carried out by the twins and escaped.

During the CCG's 20th Ward Operation, Naki and the other Aogiri Tree Forces had stayed back and waited for the Non-Killing Owl (Yoshimura) to weaken the CCG Forces. Once the Anteiku Cafe was destroyed and Yoshimura was eliminated, Eto went in and engaged the remaining CCG Troops as Naki led a small division and engaged the CCG. After he and his men surrounded a small group of Ghoul Investigators, all four of them attacked his men and they soon retreated once Kishou Arima had arrived with reinforcements and pushed the Aogiri Tree back.

In the aftermath of the Anteiku Raid, Naki makes a small and brief cameo. He appears with Gagi and Guge as the two of them are in a small park on the seesaw crying as the two twins try to comfort him.

Naki is one of the many Aogiri Tree memebrs who is hired by Big Madam to provide security at the Auction being hosted by the Ghoul Restaraunt. Naki shows up along with other White Suits as hired security for the guests as they arrive to bet on their upcoming prizes. Once Juuzou Suzuya reveals himself, however, Ayato calls on both Naki and Miza to the front stage as the chaos errupts and the CCG begins to arrive and bursts in guns blazing as the guests are all being killed. Naki is then ordered to provide and escape route as he and his followers join up with Miza's Team and are able to secure a path but are soon met with resistance from Akira. He recognizes her face but not her name and is quickly attacked by her and is unable to bet past her quinque.

Naki is a very average hight, slender individual with the size of an average adult. He wears a white suit with a dark blue shirt underneath. He has a sophisticated blond hair combed to a well mannered way and has red eyes with pitch-black eye shading as his most distinguishing feature. After the timeskip, he has changed his look by cutting his hair shorter and combing it more towards the back of his head which mimics Yamori's.

Naki is a confident and authoritative individual who often gloats about how he is the assistant of Yamori and about his strength. He shares similar traits like Yamori such as he cracks his fingers and has a psychotic mindset. Even though he is not as cruel as Yamori was, Naki is very impulsive and easily irritated. He is also very emotional and trustworhty even to the point of being completely upstanding and naive. He deeply honors and respects Yamori and went completely ballistic after Yamori was killed. He often grieves about him from time to time. He also appears to be deeply respectful and caring for his bodyguards Gagi and Guge as he was willing to use himself as a shield when battling Akira and was deeply saddened when they took up all of the fire during the Auction Raid.

Like all ghouls, Naki can be weakened with special Q-Bullets and Quinque weapons. He can't cinsume regular human food as it will critically weaken him making it easier to kill him. 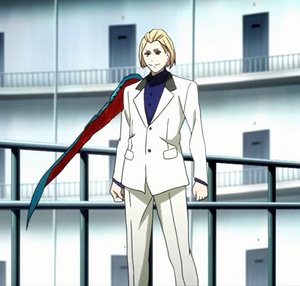 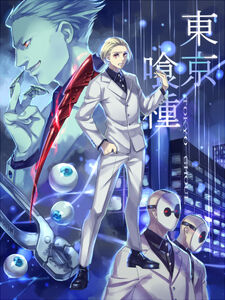 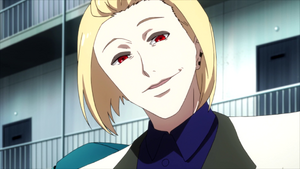 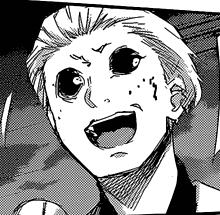 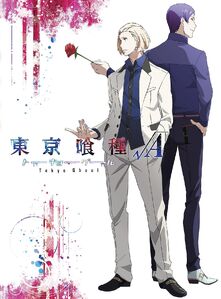 Naki on a DVD cover.