The Namazu, also known as the Unnamed Giant Catfish, is a villain from Touhou Project who appears in the fighting game Touhou Hisoutensoku as Hong Meiling's final opponent.

He is the villainous avatar of the Taisui Xingjun, the Chinese god of disasters, who sent assassins disguised as familiar characters to attack Meiling during her dream that she got from seeing Hisou Tensoku in the distance and believing it to be the Taisui Xingjun. The Namazu's purpose was to feed on enough of Meiling's energy to awaken by having his minions do so, so he could move the earth and return to his realm once again. He also spoke quite strongly of his plans to invade and cause various disasters and earthquakes in Gensokyo.

Just like his name, the Namazu is a giant catfish (namazu, to be exact) with a brownish gold body, white fins and whiskers just like any catfish, a white underbelly, and a brownish-gold fin on his tail. He also has large, round, bulbous eyes, a huge mouth, and a single protruding white dorsal fin.

The Namazu's main method of attack is to cause earthquakes that fling huge boulders at enemies. He can also try to smash and tackle enemies with his sheer weight.

He can turn earth to mud and swim in it, becoming hard to hit, showering enemies with mud or slapping with his tail. He can also charge his body with electricity and fire electric orbs.

He is also able to increase his size, growing from merely large to absurdly huge. 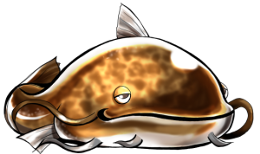