Agility
Control over a Stormdrake

Piloting the King of the Storm.

Defeat Gwyn and help the dragons reclaim the world (failed).

Kill the Ashen One (failed).

The Nameless King is a supporting antagonist and optional boss in Dark Souls III. Presumed to be the long-forgotten firstborn son of Gwyn, he betrayed his father and chose to side with the Everlasting Dragons.

The Nameless King was once a powerful warrior who served under Gwyn. Taming his own Stormdrake named the King of the Storm, the warrior was seen as a living god of war given his respect for arms and nothing else. The heir of lightning miracles, many dragon slayers sought to be trained under the warrior for his strength and wisdom, including Ornstein, one of the Four Knights of Gwyn.

That was until during the war with the dragons, the warrior suddenly chose to sacrifice everything to ally with the dragons against the lords and the Age of Fire. Despite his immense power, he was ultimately defeated, stripped of his deity status, and banished from Lordran. In order to ensure that nobody would follow in his traitorous footsteps, Gwyn ordered all traces referring to the warrior demolished so the name of the "Nameless King" would be forgotten from the annals of history. However, those close to worshiping the remnants of the king's broken idols still had vacant memories of the king and his legacy, such as Ornstein and Knight Solaire. Ornstein leaving Anor Londo to seek the Nameless King would ultimately lead to the downfall of the city of the gods when Aldrich soon invaded.

The Nameless King can be summoned to the Archdragon Peak by ringing the Great Belfry. When the area becomes shrouded in storm clouds, the Nameless King emerges from the sky riding the King of the Storm into battle. The Stormdrake attacks by shooting flames from its mouth. The Nameless King shoots lightning from his spear and if approached, he swipes and slams his spear towards the player. Attacking the head or the King himself deals more damage to the King of the Storm. Enough hits can cause the Stormdrake to stagger, allowing the player to perform a riposte and deal critical damage.

Once the King of the Storm goes down, the Nameless King kills his Stormdrake to boost his lightning powers. Even without a dragon mount, the Nameless King is very agile and his combos can quickly catch the player off guard should they dodge too early or too late. His attacks can be followed by area effects of wind or lightning. Similarly to Ornstein, he can plunge his spear into the player and electrocute them for massive damage. However, like the King of the Storm, he can be riposte for critical damage when poise-broken.

Once the Nameless King is defeated, he drops his boss soul and the Great Belfry is rung once more, which sends the storm clouds away and returns Archdragon Peak back to normal.

The Nameless King is a tall man dressed in the Dragonscale set, jagged and decorative robes made out of dragon scales. Gold bracelets are worn around his hands and feet, and he wears the Golden Crown, decorated with long silver hair that resembles bristling ash. The king himself has gray skin with black eyes, suggesting that he has long gone hollow. He wields the Dragonslayer Swordspear, a weapon devoted to slaying dragons imbued with lightning. 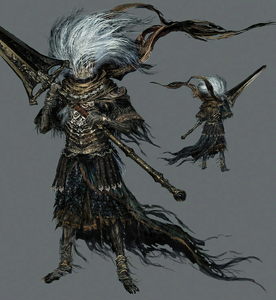 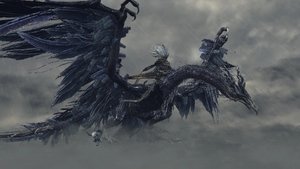 The Nameless King riding the King of the Storm. 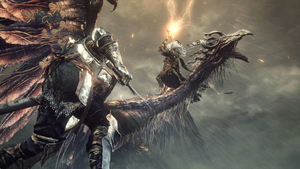 The Nameless King conjuring lightning from his spear. 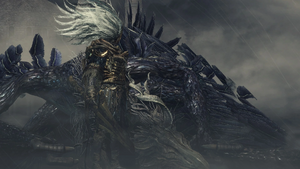 The Nameless King with the dying King of the Storm.
Add a photo to this gallery 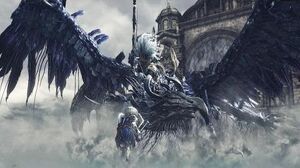 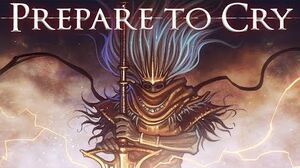 Retrieved from "https://villains.fandom.com/wiki/Nameless_King?oldid=3547038"
Community content is available under CC-BY-SA unless otherwise noted.