The Nameless One is the source of all evil and also the ultimate antagonist of the Dungeons & Dragons TV series. It is described by the Dungeon Master as pure evil and is Venger's master. He appears as a giant column of green flame and his face is said to be something not meant to be looked upon.

Not to be confused with the Nameless One, the main protagonist of Planescape: Torment.

The Nameless One's only appearance is the episode "The Dungeon At The Heart of Dawn", where it is summoned by Eric after he opens the Box of Balefire. Upon arriving at the Realm, Venger decides to greet his master, but is chided for his repeated failures to kill the children. Afterwards, the Nameless One sets out to kill them himself, rendering Venger powerless in the process.

After exhausting most of his energy, the group decides that they will run no further and try to fight the Nameless One instead. Using the power of the kids' weapons, the Dungeon Master tries to fight him, but is effortlessly overpowered. Using the remainder of his power, he teleports himself and the kids to the Underworld, but loses almost all of his power in the process.

The Nameless One is never defeated and simply leaves the Realm for other worlds to terrorize. 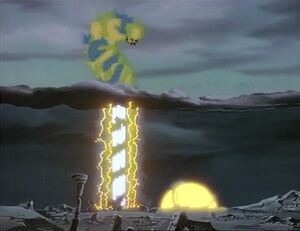 Retrieved from "https://villains.fandom.com/wiki/Nameless_One_(D%26D)?oldid=3529311"
Community content is available under CC-BY-SA unless otherwise noted.