Villains Wiki
Register
Don't have an account?
Sign In
Advertisement
in: Villains of Folklore, Urban Legends, Monsters,
and 19 more

The Nameless Thing of Berkeley Square

Kill or terrorize any that come across it.

The Nameless Thing of Berkeley Square is a particularly gruesome and feared entity from British folklore, specifically from the English city of London - where it was believed to haunt the 2nd Floor of house No. 50 in the titular Berkeley Square : starting in the year 1840 with the now infamous fate of Warboys and continuing until the 1930s, yet the monstrous reputation of the creature remains even to this day and the horrifying tale of Warboys remains one of London's most notorious ghost stories.

ever since house No. 50 was erected there had been strange tales of something strange lurking in the 2nd Floor and the place always had a dark reputation for hauntings and supernatural mischief.

in the 1840s Sir Robert Warboys boasted that the supposed hauntings were little more than old wives tales and at the tender age of 20 made a terrible mistake when he decided to prove how foolish the idea was by staying the night on the 2nd Floor : the landlord at the time was so concerned for Warboys safety that he gave the man a pistol and had him ring a bell should anything occur.

Despite this Warboys was still dismissive and went to retire, no less than an hour later the landlord was awoken to the bell ringing rapidly and then a pistol shot - racing to the room the landlord for Warboys corpse laying on one side of the room in terror, his features distorted and grip firmly on the pistol, which had fired at a wall and left a bullet mark upon the surface, yet no sign of whatever had attacked him was found : Warboy was believed to have died of sheer terror, his eyes transfixed on whatever had manifested in that terrible room.

As time went by more stories were told of the Nameless Thing, which was said to drive people to insanity if they gazed upon it too long and what little glimpses people did catch of it defied all reason - to some it was a cloud of mist and smoke, to others it was a putrid tentacled beast akin to a squid or octopus, which left behind foul-smelling slime.

At other times it manifested as a tall shadowy man or a mass of slime with claws and tentacles that made sickening noises as it moved along : servants who went to clean the room were found insane the next day, as were several noblemen who tried to repeat Warboy's hubris of spending a night in the dreaded room.

In many stories victims would be found mutilated or dead with fright, some even supposedly leapt from the window in an effort to escape whatever monstrous thing they saw in the room.

After the 1930s the hauntings seemed to die down and tales of the Nameless Thing largely passed into folklore and urban legend, though to this day many theories are passed around on what the Nameless Thing could of been - some suggest it was a violent poltergeist, others believe it to be a demon while others still attribute it to extra-dimensional beings or even an octopus-cryptid that managed to somehow escape from the nearby Thames river (there is a complex sewere system under the house which theoretically could allow such a creature access to the upper rooms, if it ever existed).

Skeptics tend to view the Nameless Thing as a classic example of overly-active imagination and rumors mixing together to create a very spooky but ultimately fictional horror story - as is the case with many paranormal events no one can fully know either way. 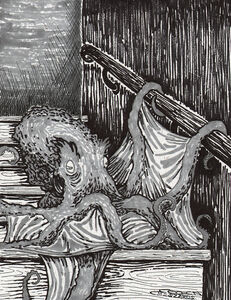 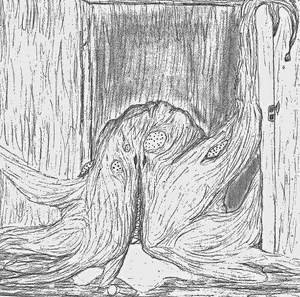 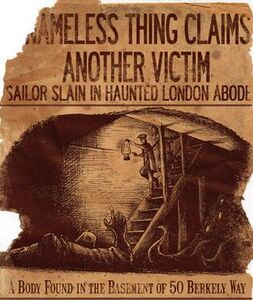