Namero Bacho is a slug-themed Gangler Monster who's one of the four antagonist in episode 1 alongside Ruretta Gerou, Garatt Nargo and Rabroom Jaws, but he's the main antagonist in episode 3 of 2018 TV series called Kaitou Sentai Lupinranger VS Keisatsu Sentai Patranger. Also he is equipped with an Idol-like treasure called Qui a fait qui.

He was voiced by Nobuo Tobita who previously voiced Brajira of the Messiah from 2010 TV series called Tensou Sentai Goseiger followed by Kagekamuro, a Fountain Pen Shadow, Hattena and Mothma.

Namero Bacho's hump and head resembles a pink slug, on his hump its his Gangler safe, he also has greeen eyes, his pink and yellow tentacles go into the clams and the snail shell gun is called the Neba Machine Gun on his left arm, on his right arm its green leaves and a pink hand root, under his pink head its a white spine that goes into his green leafy pants, his sword resembles a white clay sculpting knife that has a brown leaf on the bottom of the handle.

In the first episode Namero Bancho made his first appearance in the Back World attending Dogranio Yaboon's 999th birthday party.

In episode 3 Namero made his 2nd appearance where he was sculpting a building into a giant statue that looks like Dogranio Yaboon reasons why since he wants to be the next boss his plan is by transforming any building into a tribute statue, however he was then prevented by the arrivals of the Patrangers and the Lupinrangers after the skirmish Namero retreats.

A while later he was at Studio Baccho painting a picture of a tribute statue, however he was then invaded by the arrival of the Patrangers, but thankfully his base was armed with sticky adhesive thus trapping the police in it. However unknown to him the Patrangers were the bait for this trap leaving the Lupinrangers to battle Namero. Thankfully he sends out the Porderman to deal with the Lupinrangers, but things looked very bad for the Pordermen, so he sculpt a statue of a lion into spears to deal those pesky lupinrangers, but they manage to block the onslaught by either using the Pordermen as a living shield or used a spear to deflect it after that they manage to get into Namero's safe (which his password is 6-3-6) and stole the Qui a fait qui (translate as "Who Made Who") Idol, which by then Namero cannot sculpt any objects into a work of art anymore, after that he was then taken out by Thieving Strike.

A while later, he was then enlarged by Goche Ru Medou and this time he'd battled Patkaiser and destroyed the tribute statue, after that he was then destroyed by Patkaiser: Bullet Strike. 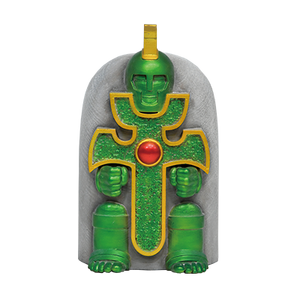 "Who Made Who/Qui a fait qui" Idol