Leader of an army of tourists

Stop the animals from taking back the water that she has already stole (both failed).

Nana is a mean, violent, aggressive, short-tempered, argumentative and cantankerous old lady. She is very tough for her age, she is incredibly resistant to injury, and she is evidently cruel to his enemies including Alex, as she was able to have a short fight with him right after being tugged out of the back of a speeding tour jeep as well as being thrown out of it a second time by the penguins, who reversed over her in the jeep after noticing that she did not die. However, despite this evident resilience, she is still portrayed as a "little old lady"; she has a waddling gait and is knocked onto her back when firing a rifle.

And the real reason that she had actions and completely uncontrolled actions would be because it have high and extreme levels of physical abilities, great lack of difficulties and physical disadvantages to express their shares, which makes the great lack of his actions were extremely high, to be able to express these actions in inappropriate situations due to excessive proactivity, and she does it all the time in innumerable moments.

In the first film, Nana is an elderly woman who encounters Alex the Lion in Grand Central Station, where she assaults him and angrily calls him a "bad kitty". She also hits the giraffe named Melman with her handbag, causing his head to get stuck in the Grand Central Station Clock. When the animals are surrounded by police, she somehow gets past and kicks Alex in "the batteries" (or his groin). She was quickly taken away by police. As shown in the sequel, she was not arrested, as she was interviewed as a witness.

In the second film, Nana has a larger role, where she is the central antagonist. She first shows up in a tourist jeep spotting Alex, as Alex and his friends crash landed into the African savannah in a plane and were seeking help. Alex, upon seeing Nana again, challenges her to another fight and they exchange lots of punches and blows to each other, but Nana gains the upper hand and badly bruises Alex before returning to her jeep.

Later on, the penguins while looking for automobile parts to repair their plane decided to start stealing cars from the humans. The penguins start their car-hijacking rampage with the tourist jeep Alex ran into, and literally throw Nana out of the jeep when they notice that she did not fall for their distraction like everyone else did. The penguins soon carjack dozens of people who were tourists in the savannah leaving them stranded. The tourists just about start panicking that they lost their transportation to get back home, but Nana hushes them to calm down and offers to guide them.

Nana becomes the leader of an army of tourists and she soon instructs the tourists to take all of the water that they can from the resort that the African wildlife (lions, elephants, hippopotamuses, giraffes, rhinoceroses, wildebeest, buffaloes, gazelles, zebras, ostriches, and flamingos) drink from. After he usurped the role of Alpha Lion away from Alex's father Zuba, Makunga refuses to do anything about the water shortage and taunts the animals must either retrieve the water themselves or just find more water outside the reserve which is poacher territory. The animals argue that both options are fatally dangerous, but Alex and Marty volunteer to go find the water because the water must be elsewhere. Nana manages to capture Alex and stop him from taking back the water while Marty escapes to get help. Nana then hogties Alex and starts roasting him on a barbecue as a means to feed herself and the hungry tourists, as well as a bonus revenge on Alex (although the tour guide objects to Nana eating a lion).

Luckily, Zuba arrives to rescue his son. Alex and Zuba then distract and entertain the tourists with their dancing, but Nana is unenthusiastic about it and still tries to shoot the lions using the tour guide's gun.

Before she can kill the lions, however, the penguins and Marty arrive in their chimp-powered plane and pull away Alex and Zuba to safety inside a bucket with the intent to take back the water. Nana climbs up on the water dam that she and the tourists built and starts waving her handbag, aiming it at the lions. However, the penguins smash the bucket holding the lions into the water dam, making Nana fall and collapsing the dam which makes the water flow back to the resort, seemingly killing Nana in the process.

Near the end of the film, once they make it back to the reserve, Alex gives Makunga Nana's handbag. Makunga admires it but tells Alex that he has still banished, which prompts Alex to drop the bucket which releases Nana. When Nana sees Makunga holding her bag, she starts kicking, foot-stepping, hand-whacking with a ruler, wet-willying, arm-burning, and spanking him before taking him away. 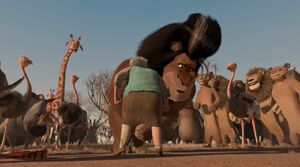 Nana attacking Makunga by kicking him right in the crotch.
Add a photo to this gallery 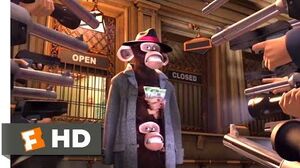 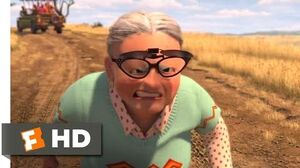 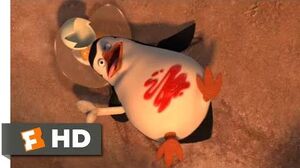 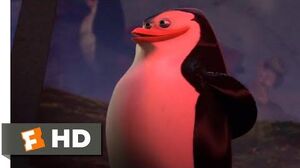 Retrieved from "https://villains.fandom.com/wiki/Nana?oldid=3753401"
Community content is available under CC-BY-SA unless otherwise noted.