Member of the Bio-Hybrid, Kurata’s minion

to help Kurata with his goals (failed)
Defeat Thomas (failed)

Femme Fatale
Nanami is one of Akihiro Kurata's henchmen and a villainess in Digimon Data Squad. She is the only female of the Bio-Hybrids which includes the two males Kouki and Ivan, and is Thomas's enemy. She can Bio-Hybrid evolve into BioQuetzalmon and BioRotosmon.

She is voiced by Ryōko Ono in Japanese Version and late Philece Sampler in English Version.

Nanami has lighter blonde hair, lavander eyes, a small top hat, and wears a gothic-like dress. She also carries an parasol with her.

Nanami is a genius just like Thomas. She can predict what will happen if she was stopped. She can even charm someone like Thomas.

When Ivan says that he shouldn't say things out, Nanami reminds him not to think out loud.

Nanami first appeared along with Ivan, introducing themselves to Miki and Megumi. They easily defeated the two PawnChessmon and quickly entered the Digital Gate.

Along the way, Nanami and the other Bio-Hybrids easily defeated the DATS’ partner Digimon, but Commander Sampson and Kudamon stood in the way and ordered the DATS to continue their mission while he and Chirinmon distract and hold off the Bio-Hybrids.

Nanami and the Bio-Hybrids somehow survived from Chirin’s attack, and encounters the Data Squad members, and Kouki tells them that Commander Sampson is gone, shocking Yoshi and Thomas, and angering Marcus.

During the war with the Sacred City, Nanami is revealed to also be a genius like Thomas H. Norstein. She encounters Thomas and Gaomon at the waterfall while standing on top of a tree. After Nanami tells Thomas that destroying the waterfall was the Sacred City's weakness, she swooped down on Thomas and Gaomon and attacked them. After toying with Gaomon, Nanami swoops down on Thomas. She tries to seduce Thomas, offering him to join her side by using her charms and attractiveness, and explaining her motivations to him. But Thomas, thinking that Nanami was just trying to use him, refuses to join her. Nanami Bio-Hybrid evolved to BioRotosmon. When BioRotosmon was defeated, Nanami was depowered in the end. She even accepted defeat.

Nanami also appeared in the final episode in one more scene in Digimon Data Squad during the showdown with King Drasil while giving her DNA. 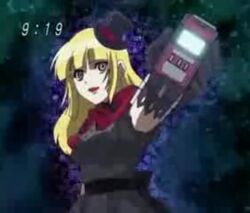 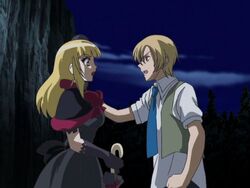