Attack of the 50 Foot Woman

To seek revenge on her cheating husband and others who stand in her way.

Vengeful Protagonist
Nancy Archer is the main protagonist and anti-heroine of Attack of the 50 Foot Woman. Due to an encounter with an unnamed alien, she is transformed into a 50-foot giantess and proceeds to go on a rampage as she seeks revenge on her cheating husband and others who stand in her way.

She was portrayed by the late Allison Hayes in the original version, and Daryl Hannah - who also played Pris in Blade Runner and Elle Driver in Kill Bill - in the remake.

Nancy was a wealthy heiress and alcoholic with a history of emotional instability and immoderate drinking due to her husband, Harry Archer, cheated on her by having an affair with his mistress Honey Parker. Unbeknownst to her, however, he was scheming a plan to disposed her for good so that he can get all of her money for both himself and Honey, whether by forced her back into asylum or murder.

Frustrated over her failing marriage, Nancy releasing her stress by speeding along Route 66 through the desert when something caught her eye. She swerved off to the side of the road when she saw a giant sphere hovering before her. An over-sized hand emerges from the sphere and she got out of the car and ran away screaming. She went back to town to the police station to report what she had just seen. However, there was no sign of the giant or the large satellite that Nancy claimed to have seen. Nancy believed that the giant wanted her diamond necklace - the fabled Star of India - the most expensive diamond in the world. Unable to find anything to corroborate her story, they brought her back to her lavish home.

At home, after learned her husband's latest affair, she breaks down and told Harry that she still love him no matter what. Harry seemingly stated that he also loved her and just wanted him to remain faithful to her. She then told him her story about a giant reaching out to her and trying to snatch her diamond. Harry humored her for a bit then took her upstairs to put her to bed. He removed the necklace from her and pocketed it as she drifted off. His intent was to sell the diamond so that Honey and he would have enough liquidated cash to run away together after disposed her for good.

The next morning, Dr. Cushing came over to the house to examine Nancy. He saw that she was suffering from severe mental exhaustion. He gave Jess, Archer family butler, instructions on how to distribute her medication and told Harry that his wife needed lots of rest and that he would check back on her in the morning. After he left, Nancy came downstairs seemingly healthy and sober. She gave Harry an earful about his another latest affair with Honey again, where he changed his mind about his original plan with the diamond. After he waled out, Nancy turned on the television and saw a news report about her fantastic claims of a 30 foot giant and UFO. The newscaster was insanely merciless in his editorial, making Nancy appear as if she were a complete lunatic. Enraged, she threw her wine glass at the TV set.

Nancy bargains with Harry, asking him to search the desert with her for the "flying satellite," agreeing to a voluntary return to the sanatorium if they find no evidence. As night falls, they find the spacecraft after the length search where Harry nearly gives up with the search. The alien creature, now seen as an enormous male humanoid, emerges and she uses this opportunity to approach the alien. Harry fires his pistol at it when it tries to grab Nancy, but the gunfire has no effect on the creature. Harry flees, leaving Nancy behind where the latter passed out on the top of the pool enclosure.

Later, when Harry decided to kill Nancy, he discovered that she has mutated where her body now grown to 50 feet tall. Learned about her mutation, Doctor Cushing called his colleague, Doctor Heinrich Von Loeb, to consult the problem. They ordered 40 lengths of chain and a surplus of medical equipment and elephant syringes. They restrained her to the bed and did their best to keep her sedated until they could determine how this could have happened. Von Loeb had no idea what to make of Nancy's condition.

Nancy is actually a very sweet girl, but very insecure and somewhat spineless. Something that both her greedy and unloving father and her gold-digging husband take advantage of. After turning into a giantess she gains new confidence and stands up to both of them, developing a temper in the process. 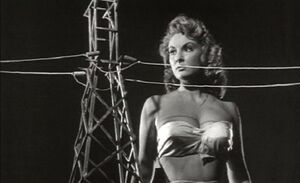 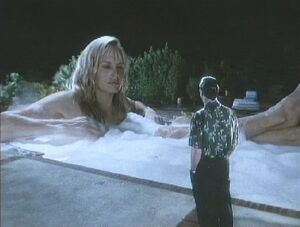 "My hearts beating faster than normal, want to feel it?" A larger and more confident Nancy tries to seduce her husband 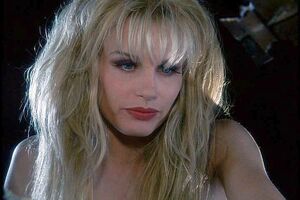 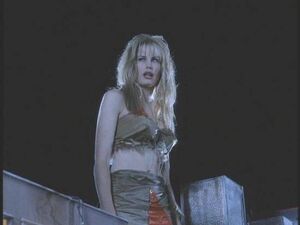 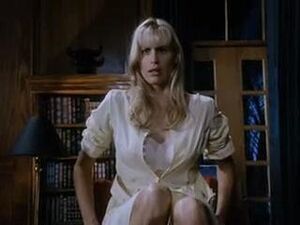 "Dr.Cushing, whats happening to me?" Nancy grows when she is angered 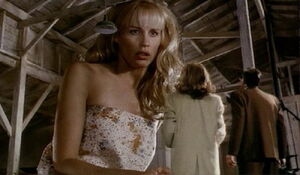 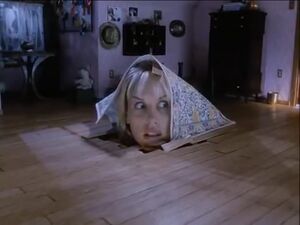 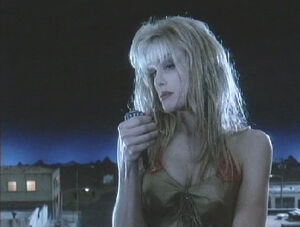 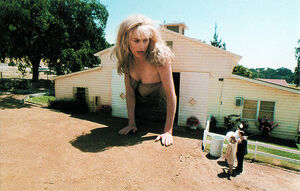 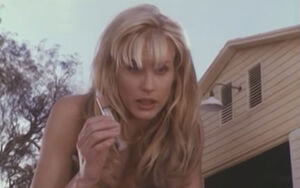 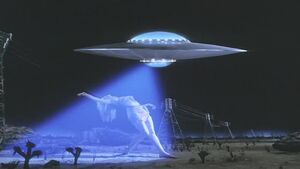