Start a Wiki
Nancy Claus is a vampire, the wife of Santa Claus, and, 300 years prior the events of Billy and Mandy Save Christmas, as well as its (former) main antagonist. Nancy was appointed the Head-Head Vampire over all of the other head-vampires.

She was voiced by Carol Kane.

According to her husband, Santa, Nancy was a vampire long before the two of them had even met, but that didn't discourage him from courting her. According to Nancy, Santa having always had, in her own words, a "odd desire to give presents to complete strangers," had shown her the joys of giving, (blood,) not just recieving.

After the two of them got married, they perchased a "Pole of their own". Knowing that that making Christmas every year would be a lot of work, they both agreed to divide the work equaly amongst the two of them. Over the years, however, Santa became more pre-occupied with checking his 'naughty and nice' list and updating it, leaving his wife to pick up his slack. In Nancy's own words, Santa "works one night out of the year," while she is "working her fingers to the bone the other 364".

She is also one of the characters who stole Grim's Scythe in Billy and Mandy's Big Boogey Adventure. 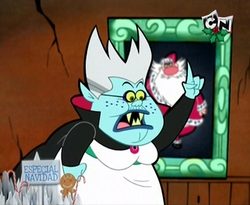 Nancy Claus as a vampire. 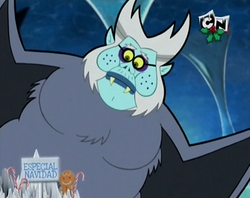 Nancy Claus in her monstrous vampire form.
Add a photo to this gallery

Retrieved from "https://villains.fandom.com/wiki/Nancy_Claus?oldid=3311071"
Community content is available under CC-BY-SA unless otherwise noted.