Skullgirl (current, but later she is killed)

Do good for her family and his nation

Pray in the Grand Cathedral

End all external threat, guarding their dominions possessively and kill whoever opposes it (succeeded; later failed)

Nancy Renoir is a character featured in Skullgirls series. She iz the former queen of the Canopy Kingdom, mother to Umbrella and Parasoul, and last owner of the Skull Heart, wished for peace between warring kingdoms. Her wish was granted when their armies formed an alliance to bring her down. She's currently dead, but fighting game boss characters don't like to stay dead.

It was and is the most powerful Skullgirl ever conceived.

She looks slightly like the Mother of The Trinity (when it was affected by the powers of the Skull Heart). Although the Mother has never really seen her silhouettes physically, they seem to coincide.

Before her transformation, she used to look a lot like her daughter, in terms of facial features and hair style, covering her left eye with her black hair and the symbolic cross-shaped necklace that represents his reign. It occupies as a dress a bronze crown, a long purple wine dress that discovers its shoulders, wearing a white cloth tied on its hips, below the belly there is a black cloak and on it it has an adornment similar to a net like the one in its neck.

Queen Nancy wished for peace between the warring kingdoms. Her wish was granted when their armies formed an alliance with her husband, the King (whose current status is unknown). However she was also brought down.

Queen Nancy gave birth to Umbrella while she was still in possession of the Skullheart. It was because of that tragic event that Parasoul decided that she should destroy the Skull Heart so no one could repeat the tragedy her mother met.

Double mentions how Nancy used to come to the Grand Cathedral every day to pray for peace while noting Parasoul's anger at her and Valentine for trying to keep her from getting to Marie and Umbrella.

The Queen Nancy and her daughter Parasoul, the Renoir princess.

Portrait of Nancy Renoir in his human form. 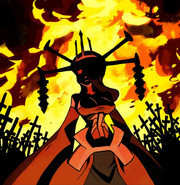 Queen Nancy turned into a Skullgirl in a flashback of the story mode, in the middle of the city destroyed by her for his hierarchy allegories.