Noting a target's worthiness while still taunting them with their eventual demise.

Kill Hiryu who is a threat to Meio's creation of new world order.

Martial Artist
Nang Pooh (南風 in Chinese), is a villainess debuted in Strider (2014). She serves as a member of the Kuniang M.A./Four Winds, taking the spot and traits of the original third member, Sai Pooh.

Nang Pooh is the youngest sister in the bounty hunter and assassin team of trinity known as the Kuniang M.A./Four Winds. She is recognized from her sisters by her blue clothes and two pigtails with large circular decorations. She is most dilligent and driven member of the team, she's an expert of spear combats and wields a crescent spear known as Fāng tiān jǐ (方天戟, Heaven Percing Halberd) to fight at mid range. Nang Pooh exhibits superior talent for both offense and defense, using her Houtengeki's length to strike at mid-range or to keep her opponents at bay by creating a strong whirlwind with it.

Nang Pooh is a very dilligent person, having the strongest will and determination of the three sisters and serving as the team's stern foundation. She often tasks herself with keeping her hotheaded sisters on check. She tends to overwork herself trying to appear strong at all times, and makes her best effort to keep up with her older sisters. As a result of this, she comes off as the most controlled and straightforward when addressing enemies.

Nang Pooh first appeared as a character in the crossover game called Namco x Capcom, thought as an entirely different character. In this game, Nang Pooh/Nam Pooh are grey-clothed clones of Tong Pooh that serve her. This in itself was a nod to the (strictly) optional Kuniang boss fight in Strider 's final stage, where the said Kuniang member wore grey instead of their colored suits. As mook-type enemies, they have no lines or storyline importance, serving as simple cannon fodder. They use the same techniques as Tong Pooh as well.

In the 2014 game in which she made her debut, Nang Pooh assumed the position and traits of Sai Pooh (西風 in Chinese), the original youngest sister. This change is presumed to have been done in order to keep the '4 cardinal winds' theme naming, since the name of the sisters' master and new character called Xi Wang Mu translates to 'Queen Mother of the West', making Sai Pooh or 'West Wind' redundant.

Nang Pooh, like her sisters, serve Grandmaster Meio as his personal bounty hunters and assassin unit. After Hiryu infiltrated Kazakh City, they are ordered to pursue and eliminate him. The sisters tracked him across the city complex.

Following Pei Pooh's defeat, Nang Pooh tries her luck next, awaiting for Hiryu at the end of Kazakh City's residential district. She taunts Hiryu through the city's broadcast system as he battles the city troopers. She admits Hiryu shows "promise" after he survived the deadly trap in the Ministry of Propaganda, but still continues taunting him as he draws closer, saying that in the end he'll fail like the other Striders before him.

Just as Hiryu is about to leave the district, Nang Pooh drops in front of him and blocks his way, ready to engage and finish him. Unable to best Hiryu alone, Pei Pooh, seeing that Nang would lose should the duel draws out, makes a sudden appearance and joins her sister in battle. But not even their combined might is enough and the two are forced to retreat, Nang Pooh claiming the Kuniang M.A./Four Winds will heal her and she will return to finish what they began.

Finally, Nang Pooh and her two older sisters await together for Hiryu in the Industry area. At first watching as Tong Pooh takes on him alone, she later joins her sisters in battle, and eventually all three sisters have to fight together to bring Hiryu down. In the end, however, Hiryu's might still proves superior and all three are defeated.

As part of a limited cross-promotion with the Vita port of this Dragon's Dogma spin-off, Nang Pooh appears as a character card alongside her sisters and Hiryu, sporting an unique job class. 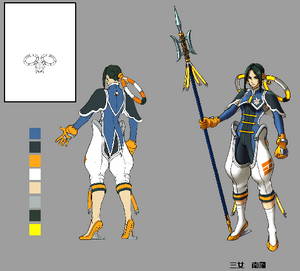 Retrieved from "https://villains.fandom.com/wiki/Nang_Pooh?oldid=3750788"
Community content is available under CC-BY-SA unless otherwise noted.