Nano was an immature villain in the TMNT 2003 series until the episode "Membership Drive." He is a set of nanobots that can take mechanical items and rearrange it to make a body for itself.

In the 2003 series episode "Nano", Nano was created as a government project by Dr. Richards but it had a mind of a three year old and can only create simple robots. Richards was going to update it after a cup of coffee. However, Nano escaped and ran into Harry. It took Harry's broken toys and made a body for itself. Harry adopted Nano and used it to break into stores. One night, he and Harry broke in April's "2nd Time Around." Nano was looking at the theatre masks and stole and used them to describe his emotion. When they were about to leave, Casey Jones caught them leaving. Nano took a car and created a body and defeated Casey Jones. However, the turtles heard a noise and went down to investigate. They encountered Nano and had fight in which Nano won but Don cut off a piece of Nano during the fight and realized extreme heat is its weakness. Nano and Harry went to the junkyard and made it their hideout. The turtles went to the junkyard to fight Nano but it took some mechanical pieces from the Junkyard and made a large body for itself. The turtes tried to defeat him by cutting him fast and pushing him in the crusher but it failed. However, the turtles caught him with an electromagnet. Harry tried to save him by turning off the electromagnet's power but the electromagnet drops Nano into a furnace below melting him.

In "Modern Love-The Return of Nano", it is revealed some parts of Nano survived. After his rebirth, he watches a 1950s family show but then breaking news came and reported Harry Parker is transferred to a new prison. Nano sees his father on TV and goes out to break his father out of prison. Nano breaks his father out of jail and goes to the lab where he was created and kidnapped his "mommy" Dr. Marion Richards. He absorbs some of the lab machines and builds a house in the lab so he could have a " family". Nano became enraged when he saw his parents arguing. He then replayed a video of his first robbery with his father Harry. Nano decides to make his parents happy. He goes to Coney Island amusement park and gives Harry the loot (jewels, diamonds, and other valuables worth millions of dollars which he and Nano stole in "Nano"). Harry was pleased to see the loot but he asks Nano to let him go and Dr. Richard says the same thing too. Nano gets furious and destroys the amusement park. The Turtles arrived and tried to talk to Nano but he remembers his fight with the Turtles in junkyard and absorbs parts of the amusement park rides.

In the episode "Membership Drive", while salvaging Triceraton tech for Agent Bishop, Baxter Stockman stumbled upon the nanobots attached to a burnt-out Triceraton ship. In order to put them under his command, Stockman made a microchip and placed it on one of the nanobots, which in turn sent its programming to the other nanobots. However, Stockman's over-ride programming reactivated Nano's personality and caused an internal conflict, alternately driving him between committing violence and trying to seek help. The Nanobot broke out of the container which he was held in, built a new body using Triceraton tech, as well as making "Henchmen" from Bishop's lab, and escaped into the streets of New York.

While moving down the streets, Nano saw the Justice Force on TV and attempted to seek their help, but his scrambled judgement made him attack the team instead. Leo and Mikey, who were present at the Justice Force's headquarters to ask for their allegiance against the threat of the Tengu Shredder, recognized Nano, and after Ananda managed to analyze Nano's problem, they took the shrinking belt of Moleculo, who had come to apply for membership in the Justice Force, went inside Nano, and managed to remove the infected nanite from the rest of the system. Nano regained control over himself, formed a new body, and with some helpful introduction by Mikey, Leo and Ananda, became the newest member of the Justice Force, completing their membership drive. Having evolved his programming since his past encounters with the Turtles, he thanks them for their help, and apologizes for his "Lack of maturity".

Nano and the rest of the Justice Force were later on part of the Turtles' strike team against the Tengu Shredder. 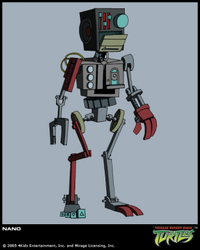 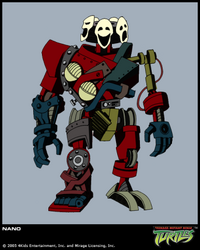 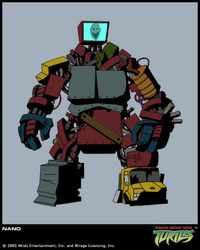 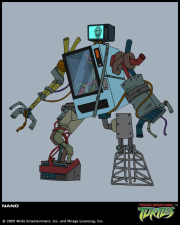 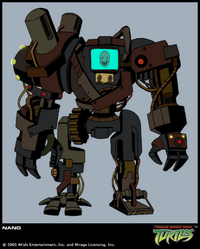