Naomi Saito is the primary antagonist of the Masters of Horror episode "Dream Cruise".

Being cheated on and murdered by her husband Eiji, who dumps her body into the ocean, her ghost seeks revenge against him and his second wife Yuri and even terrorizes aquaphobic American partner Jack Miller aboard their cruiser Yuri.

As Jack and Yuri swim away from the cruiser, Naomi pulls Yuri under to drown her but is stopped by the apparition of Jack's deceased brother Sean, who drags her (Naomi) down into the ocean, presumably into the afterlife.

She was portrayed by Miho Ninagawa.

Jack and Yuri looked at the ocean, as they Jack's ex-wife as a green-colored spirit appearing in the ocean. They instantly ran away, which escalated in Yuri accidentally falling to the ground. Jack turned around, helping her stand up, but Jack's ex-wife possessed her, creating a total monster of her.

Jack then slowly started moving away from her, as Yuri was following him. Jack then took his weapon which he pointed at Yuri if she gets even closer, that he will hit her with it, while Yuri was repeatedly saying his name over and over again. At this point, Jack wanted to hit Yuri in the head, but Sean gets under Jack, holding his hand.

Witch escalated in Yuri attempting to grab Jack's neck. After this, Jack realized it was only his imaginations. Jack and Yuri hugged, but then really his ex-wife appears, scratching the back of the door. Eventually, Jack and Yuri escaped by jumping out of the boat, while his ex-wife was following them all over the place. 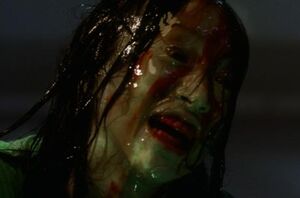 Yuri getting possessed.
Community content is available under CC-BY-SA unless otherwise noted.