Drinking alcohol.
Eating jams.
Brainwashing the other animals to see him as their savior.
Altering the Seven Commandments of Animalism.

Oust Snowball and become sole leader of Animal Farm.
Maintain rule over the farm by brainwashing the animals.
Alter the Seven Commandments to suit his own needs (all succeeded).

Napoleon is the main antagonist of George Orwell's 1945 novel Animal Farm and its adaptations. He is a ruthless Berkshire boar of the Manor Farm who took part in the revolution to kick out the farm's owner Mr. Jones and becomes the tyrannical leader of the Animal Farm after ousting his political rival Snowball, eventually turning the farm into a state no better than it was under Mr. Jones.

In the 1954 animated film, he was voiced by the late Maurice Denham, who also played Mr. Jones in the same film. In the 1999 live-action film, he was voiced by Patrick Stewart, who also played John Bosley in Charlie's Angels, Rafe Bentley in Masterminds, Dr. Jonas in Conspiracy Theory, Locutus in Star Trek: The Next Generation, Zobek in Castlevania: Lords of Shadow, Pharaoh Seti I in The Prince of Egypt and Avery Bullock in American Dad!.

After Old Major's death, Napoleon and Snowball assumed control of the animals of Manor Farm and orchestrated a revolution, successfully overthrowing their irresponsible farmer and his "regime". Napoleon was initially considered a war hero; however, he soon revealed his true colors to all of the other animals, revealing himself as extremely corrupt, traitorous, selfish, and greedy, chasing Snowball away in order to declare himself the leader of Animal Farm and enacting changes to the administrative structure of the farm by replacing communal meetings with a committee of pigs who had the power to pass laws. As he grew more authoritative and powerful, he began employing cruel methods to dispose of animals whom he deemed a threat and adopted tyrannical and undemocratic policies almost identical to those used by the humans, even making hypocritical changes to the sacred Seven Commandments of Animalism which was Animal Farm's core belief system.

Throughout the book, Napoleon constantly slandered Snowball, branding him a traitor who was working for Mr. Jones.

By the end of the book, Napoleon and his fellow pigs (minus Snowball, who ran afoul of Napoleon and was disposed of) and human allies are so iniquitous and corrupt that the other animals can no longer tell the difference between the pigs and the humans.

However, in the 1954 film and 1999 live adaptation, Napoleon's actions are generally consistent with those of his novel counterpart. He and his fellow pigs (again, minus Snowball) gradually exert complete control over the farm, rewrite all of Old Major's commandments, and eventually start wearing human clothes, walking on two legs, and drinking. Just like the book, by the end of the adaptations, the other animals could no longer tell the difference between the pigs and the humans. Also in the animated adaptation, Napoleon had his dogs kill Snowball instead of simply chase him off.

Napoleon's fate deviates from the original book, where he survives, and in both films, he dies. How so varies between the adaptations.

Napoleon is described as a mature stud boar, although he was the runt of his litter and had to fight for food growing up in order to become big and strong, contributing to his socially Darwinistic view of the world and of his place in it. During his reign over the farm, he becomes quite overweight due to his excessive eating and alcoholism. In the animated film, he is depicted as bipedal, sneering, imperious, autocratic, and authoritative, wearing dark, double-breasted suits. In the adaptations, he is depicted with black and white fur.

Napoleon is a cruel, oppressive, hypocritical, deceptive, and tyrannical dictator defined by his unquenchable thirst for power. Napoleon is a remorseless and psychopathic sadist who abuses his power as soon as he obtains it and is only concerned with furthering his own selfish goals rather than benefiting Animal Farm. He is also extremely manipulative and charismatic, so he is able to inspire the other animals to turn against Snowball's vision of the peaceful Animal Farm, although it could be argued that Snowball had visions of a dictatorial government himself.

Although he initially presents a façade of self-effacing modesty, describing himself as "a practical pig of few words" who would "work hard and say little", Napoleon predominantly uses words to manipulate others, and is a supercilious and narcissistic elitist, ordering that many poems and songs be written about himself, singing his praises as the savior and leader of Animal Farm and insisting that it reverts to its original name of Manor Farm after he had established himself as its dictator and succeeded in rallying the other farmers to his cause. He is also a hedonistic and parsimonious alcoholic who sired many illegitimate piglets. Whilst being obviously intelligent, knowledgeable, and self-confident, Napoleon rarely contributes any ideas of his own, preferring to discredit the ideas of his opponents and then claim those ideas as his own once he had driven out his rivals. This is to both further convince his fellow animals that he is a great leader as well as keep his opponents in line.

Napoleon is also extremely opprobrious, vituperative, persuasive, deceitful, and bitter, having had to fight his way to power through cruelty and cunning as a result of being the smallest of his litter of pigs. He sees the world as a socially Darwinistic place where the ends always justified the means. He even goes as far as to make a deal with the humans at the end of the book. This shows that Napoleon is nothing more than a heartless tyrant who would do anything to remain in power. 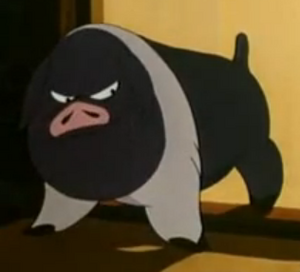 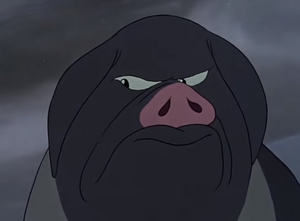 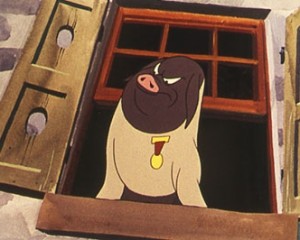 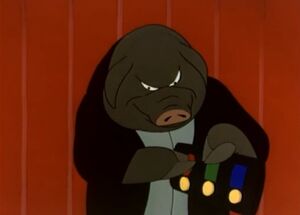 Napoleon showing the other pigs his badges. 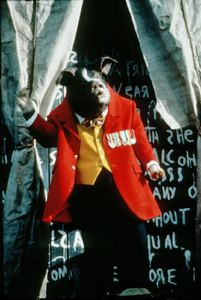 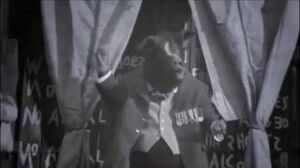 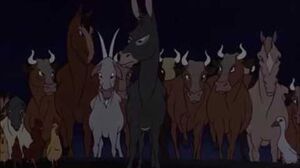 Retrieved from "https://villains.fandom.com/wiki/Napoleon_(Animal_Farm)?oldid=3974896"
Community content is available under CC-BY-SA unless otherwise noted.