Castle owner (as Kagewaki Hitomi)
Bandit (when he was Onigumo)

Kill Kikyō for good. (all succeeded)
Destroy Inuyasha and his friends.
Remove Onigumo from his being which is the only thing that can redeem him. (all failed)

Naraku is the main antagonist of the manga/anime series InuYasha, being responsible for almost every atrocity and misfortune in the series. He is a spider hanyō who was born from the human named Onigumo, and various other yōkai. He was directly responsible for the death of Kikyō and the seal placed on Inuyasha. Naraku desired the Shikon Jewel, a jewel that would be able to grant him near-invincibility should he acquire all the pieces of it. He desired the jewel to purge his half-human self from his body, and enhance his strength even further.

He is voiced by Toshiyuki Morikawa in the original Japanese version of the anime, and Paul Dobson in the English version. The former whom had also voiced Yoshikage Kira, Lord Boros, Mard Geer Tartaros, Sephiroth, and Griffith while the latter of whom also voices Graham Aker and Happosai. and Hong Shi Hoo in the Korean dubbed version.

When Naraku first appeared in the series, he wore a white baboon cloak-like outfit that hid his face. He was a shapeshifter and as such, no one knew what he actually looked like. As Naraku wanted a temporary body to remain in the world, he then killed and possessed the young lord Kagewaki Hitomi, and kept that form for the rest of the series. Because he took over Kagewaki's body, he has Kagewaki's long black hair and pale skin, as well as his build and voice. The only difference between them is their eyes; while Kagewaki's eyes are brown, Naraku's are red with white pupils with blue eyeshadow. Later on, he dresses in a simple, common outfit. It was dark blue with a purple vest on top.

Throughout the series, Naraku was consistently portrayed as incredibly cruel and manipulative, using others to satisfy his own interests and taking great sadistic delight in destroying the bonds and lives of others, such as when he tricked Inuyasha and Kikyō into thinking they had betrayed each other, causing them to fight. He rarely took responsibility for any of his actions, often twisting the details to make it seem like others were to blame, such as when he mocked Inuyasha and Kikyō for not trusting each other enough to see through his deception. While highly intelligent and cunning, he became too conceited and ostentatious at times, especially when he obtained any new power. His overconfidence got himself cornered many times, such as when Inuyasha's Red Tessaiga broke his barrier for the first time, leaving him entirely shocked. Naraku had a cowardly streak too, and often fled from a battle when his foes had turned the tables on him.

Above all else, Naraku was power-hungry and self-obsessed, desiring only power and sheer dominance over others. He bore nothing but contempt and disgust towards all other beings and considered himself superior in every aspect, which can be noted in almost all of the sarcastic remarks he made; especially towards Inuyasha and the humans, despite being a hanyō himself. It became Naraku's sole occupation to cause as much pain and misery to humans and yōkai alike as possible, such as when he placed the Wind Tunnel curse on Miroku's grandfather, which later passed on to his father and Miroku too, or using a shard of the Shikon Jewel to brainwash Sango's brother Kohaku, forcing him to do his bidding.

Naraku also appeared to lack the ability to understand bonds such as love, best displayed when he was unable to understand why, no matter what he forced the brainwashed Kohaku to do, Sango simply refused to kill him. Naraku frequently tried to get rid of his human emotions under the belief that they only held him back.

However, Kagome eventually pointed out that he actually could understand human bonds more than he let on, as he couldn't have done all the horrible things he did if he didn't understand what it was like to have a bond with someone and the pain of seeing love broken. Furthermore Naraku's hatred was motivated by his own jealously; Naraku couldn't bear to see people indulge in mutual loving relationships while he himself had no-one and thus sought to destroy the happiness of others to feel better about his own loveless existence.

That critical quality of Naraku's was what differentiated him from a true psychopath, as psychopaths have no emotional attachments to others whatsoever, while it was the human Onigumo's lust and love for Kikyō that was at the core of his motivations for his actions from the beginning of his existence as a hanyō.

Naraku is responsible for most of the characters' misfortunes, including the death of Kikyō, the sealing of Inuyasha to the sacred tree, Miroku's curse, and the death of Sango's family.

Naraku's origin lays in the human, Onigumo. Onigumo was a selfish bandit who lived a life full of sin and void of love. When Onigumo was disfigured and crippled, Kikyō felt pity for him and continued to take care of him, even when he tried to push her. Onigumo secretly fell for her, but was pained that she loved Inuyasha, and his belief that a pure miko would never love a wicked man like him. Driven by frustrated lust for Kikyō and envy towards Inuyasha, Onigumo drew a horde of weak demons that loathed Kikyō and made a bargain with them: they could eat his flesh, and the demons would combine into one entity to become part of that new body. With this, Onigumo could kill Inuyasha and capture Kikyō until she agreed to return his love.

However, the resulting half-demon promptly caused Kikyō's death in an attempt to corrupt and possess the Shikon Jewel-his intent being that she would use the jewel to save herself and thus both would be corrupted and be his. Unlike other Half-Demons, he can choose what time will he lose his powers, however he reverts to a head attached to multiple demons. During this time he discards the weaker demons that he's attached to.

Naraku is driven by three goals: To become a full demon, to possess a fully-corrupted Shikon Jewel, and to possess Kikyō. The third goal is rooted in Onigumo's heart as a vital part of Naraku's body, causing an obsession with Kikyō that prevents him from killing her. He attempts to rid himself of Onigumo's heart multiple times, ultimately separating it into globs of flesh he leaves in Mount Hakurei. With his heart freed from his obsession, he is able to later kill Kikyō.

On his final death, he faintly remembered why he made the bargain in the first place and expressed regret at never being able to have Kikyō for his own in life and even in the afterlife. Naraku then wishes for Kagome to be sealed within the jewel and to be trapped with him.

His post death fate differs in the manga and anime. In the manga, Inuyasha chooses to destroy the Jewel forever, also causing the spirits of Naraku and the Demon of the Jewel, sealed within the Jewel, to cease existing, preventing them from even going to the afterlife.

In the anime, Kagome was able to wish the Shikon Jewel out of existence and freeing all the spirits trapped within it to go their resting place, when the purifying light hit Naraku's soul, cleansing him of all evil, he felt at peace for the first time as he faded away into the afterlife.

Throughout the series, Naraku creates many subordinate beings from his own body to aid his goal of killing his opponents and reuniting the shards of the Shikon Jewel, whose corrupted form he hopes to use to gain ultimate power. To prevent these offshoots from ever betraying or even separating him, Naraku held the hearts of his creations and would squeeze their hearts to keep them in line.

Naraku was naturally, in all aspects, a foil to Inuyasha. Both of them were outcast half-demons that selfishly sought to become full demons and both fell in love with the same human priestess, but their choices determined who they became.

While Inuyasha established bonds with other people to stave off his loneliness and ultimately abandoned the goal of becoming a full yōkai when he found being a full demon meant losing his human feelings. In a contrast, Naraku ruthlessly destroyed the bonds of others to take joy in their sadness and ultimately alienated himself from everything, even in his own creations, who he abused and used as slaves. Naraku welcomed losing his human feelings and had always despised them for holding him back.

When Inuyasha thought Kikyō, the woman he loved, hated him and would never return his feelings, he continued to better himself and to wish for her happiness.

Even when Naraku fell in love with Kikyō, he never tried to improve himself as a person and as soon as he decided Kikyō was unobtainable, he chose to become an even worse person; devoting himself to ridding himself of his last vestiges of humanity and killing his beloved Kikyō so no one else would get to have her love.

In the final battle, Inuyasha outright said that a reason he hates Naraku was that he reflected himself if he had chosen the path of hatred and evil over love and good. 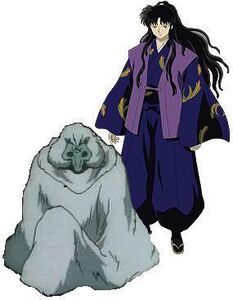 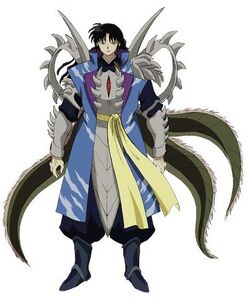 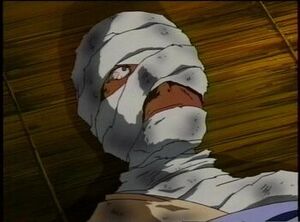 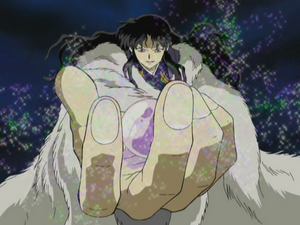 Naraku with the Shikon Jewel. 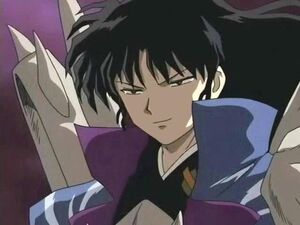 Naraku in his battle gear. 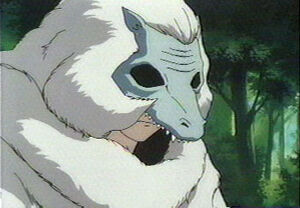 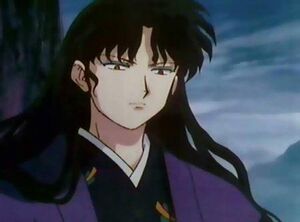 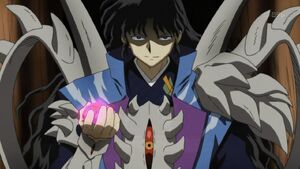 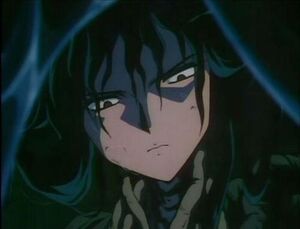 Naraku's appearance when he loses his powers. 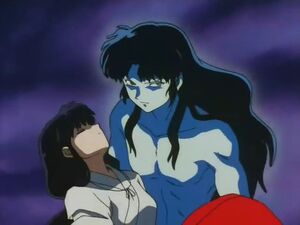 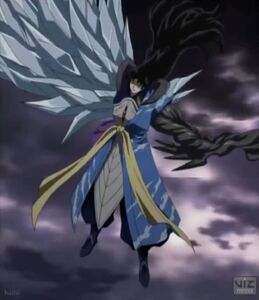 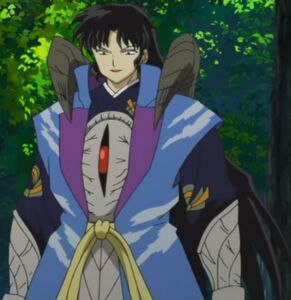 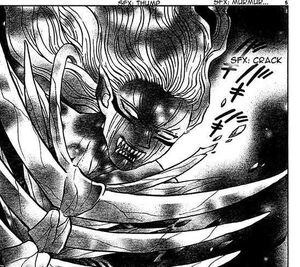 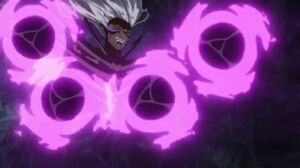 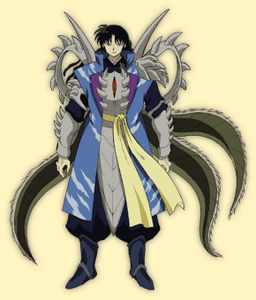 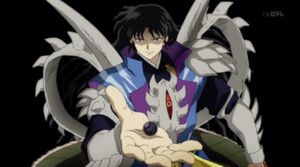 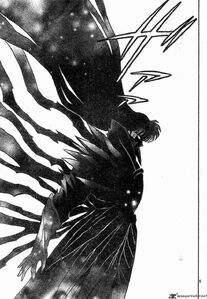 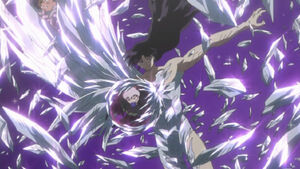 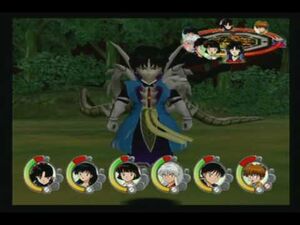 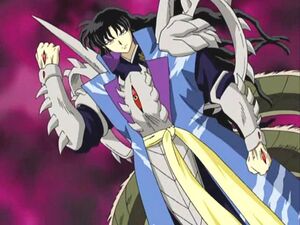 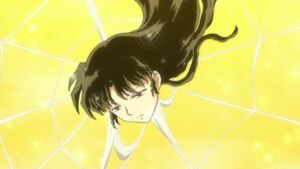