Narutaki is a mysterious man who travels the A.R. Worlds and the central antagonist in Kamen Rider Decade, as well as a recurring character in other installments in the Kamen Rider franchise.

Referring to himself as a prophet, Narutaki firmly believes that Tsukasa Kadoya, should not exist in any world and uses the other Kamen Riders to kill for him. He also talks Natsumi into doing the deed herself as the upcoming Rider War will awaken Tsukasa's true nature as Decade. He also appears as a major antagonist in the Kamen Rider Decade and Kamen Rider W crossover film Movie War 2010 where he, in the guise of Colonel Zol, is one of the leaders of Super Shocker.

Narutaki later returns in the guise of Doktor G as the commander of a reborn Dai-Shocker and one of the two main antagonists of Kamen Rider x Super Sentai: Super Hero Taisen alongside Rider Hunter Silva, with whom he masterminded the war between the Kamen Riders and Super Sentai in order to defeat Decade.

He was portrayed by Tatsuhito Okuda.

After Decade defied his premonitions of doom in the previous nine worlds, Narutaki decides to personally deal with him in the World of Hibiki by summoning a Bakegani, revealing to Natsumi that Tsukasa's actions are actually destroying the worlds rather than saving them as they were told, and that only she can stop the madness now.

In the World of the Rider War, he asks for Tsukasa's help to stop Apollo Geist from speeding up the destruction of all worlds, but this doesn't change his belief that Tsukasa is the true cause of the destruction, or his desire to see Tsukasa stopped.

Soon after, Narutaki becomes Colonel Zol to join the Super Shocker organization to take advantage of the Kamen Riders' defeat to conquer the worlds. However, when Doras fell from the Super Crisis Fortress and knocks him out of his way, he reverts back to Narutaki and curses Decade for causing a new calamity born from the Neo Organism's antics before running off.

Narutaki resurfaces a few years later disguised as Doktor G and a general of the revived Dai-Shocker. He served as second-in-command of the organization, standing bellow only the Great Leader himself, Tsukasa Kadoya/Kamen Rider Decade. He was secretly the driving force behind Dai-Shocker's return, reviving and recruiting past villains as well as placing Tsukasa Kadoya as its figurehead leader for the expressed goal of defeating Dai-Zangyack and its leader, Emperor Marvelous, formerly Gokai Red and the leader of the Kaizoku Sentai Gokaiger.

He later forms a alliance with the villains of the Dai-Zangyack as both groups trick their leaders into killing off their enemies for them. However, Tsukasa and Marvelous played the villains and made their move as Doktor G and Silva attempt to create Big Machine. In the battle that followed, Doktor G overpowers Decade and his Kamen Rider allies as Kani Laser until the Goseigers give Decade, Ryuki, and Blade their defense Gosei Cards to weaken Kani Laser to finish him off with a triple Rider Kick. However, reverting to his true form, Narutaki tells Decade that his journey will continue and departs to another world.

Narutaki later appears in front of Kouta and Right as he gives Kouta a Rainbow Pass and before leaving without further explanation about an outcome Rider War between each Riders from two different eras.

Narutaki arrives in Drupers, telling Tsukasa, Kouta, and the others about the Badan Empire and the situation between the Showa and Heisei Riders before leaving. He later appears again where the Riders from both eras were fighting and commenting on Gaim's or 1's action of winning the war. After the battle, Narutaki tells Decade how awesome the Kamen Riders are, but not before cursing at him.

Narutaki returns disguised in an ornate mask, where he facilitated a game to choose a new king from a group of people brought to a mysterious island. He reveals his true identity in the final round after Tsukasa Kadoya comes to investigate. 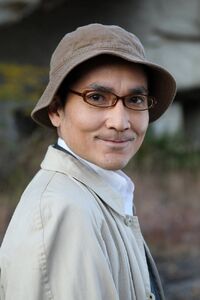 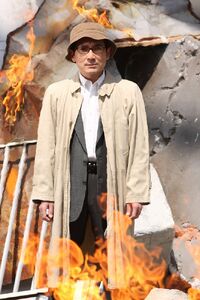 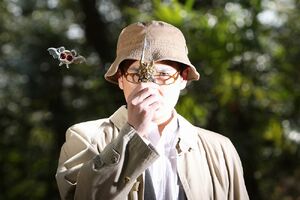 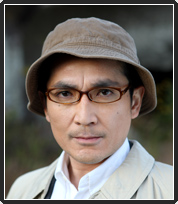 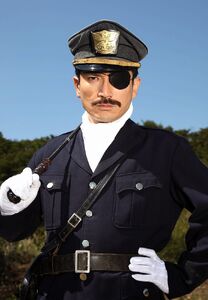 Narutaki in disguise as Colonel Zol as commander of Super Shocker. 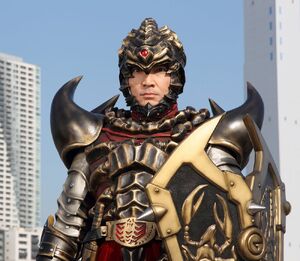 Narutaki in disguise as Doktor G as commander of the newly revived Dai-Shocker. 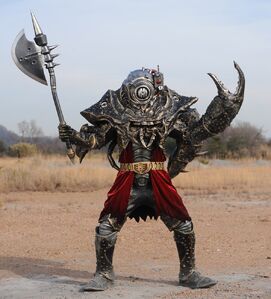 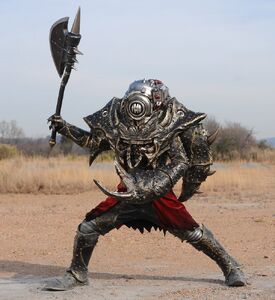