Protect Kanou and Kurona (failed with Kanou, but succeeded with Kurona).

Nashiro Yasuhisa (in Japanese: 安久 奈白, Yasuhisa Nashiro) is an antagonist in Tokyo Ghoul. She is a former human-turned Artificial One-Eyed Ghoul and is the twin sister of Kurona Yasuhisa. She is also one of the personal bodyguards of Dr. Akihiro Kanou and is also a member of the Ghoul Restaurant.

She was voiced by Haruka Tomatsu in Japanese and Michelle Rojas in English.

Nashiro and Kurona were once happy cheerful little children during their younger years until one day they were scared by the gruesome murder of their father at the hands of a ghoul. The C.C.G. took both Nashiro and Kurona into their custody and began to train them to become future Ghoul Investigators afterwards. Both Kurona and Nashiro eventually ran into Akihiro Kanou and he manipulated the two of them into running away with him and allowed him to turn them into Artificial One-Eyed Ghouls. Nashiro along with her sister both refer to Kanou as their new father.

Nashiro makes her debut appearance in the Root A anime series where she and her sister Kurona are seen watching as Ken Kaneki and Ayato Kirishima help break Naki from the CCG after they destroyed a small convoy that was taking Naki to the Ghoul Detention Center (a.k.a Cochlea) in the 23rd Ward. The two twins engage Kaneki in a short fight and then leave but not before revealing their faces to him to show that they are also One-Eyed Ghouls like Kaneki is too. Nashiro appears again where she and Kurona are seen entering into Cochlea sometime after the Aogiri Tree forces were able to wipe out the defenses and have them sneak in undetected by the CCG. The two twins then run into an old friend of theirs, Juuzou Suzuya. The three of them have a little talk until Juuzou decides to attack them in which he heavily injures Kurona and almost kills Nashiro in the fight. Kurona then carries Nashiro away from Juuzou and eventually out of the detention center.

Nashiro is seen at Kanou's Laboratory where she and Kurona help delay Kaneki from capturing Madam A in an attempt to stall him until they are ordered by Kanou to leave her and defend the compound. During the raid, Eto breaks in and she taunts the twins about their dead parents and dashes away from them. Nashiro then runs into Juuzou again where she and Kurona engage Juuzou in a fight until Kurona is slashed by Suzuya's Scorpion 1/56 Quinque Knives. Nashiro then launches herself at Suzuya only to be slashed by his 13's Jason Quinque and Kurona to carry her away to a safe zone away from the battle as the rest of the CCG Forces arrive. The twins then find out that Kanou is a member of Aogiri and he leaves them behind after Kurona refuses to abandon her sister.

Nashiro's injuries was too much for her to survive even with her regenerative powers. So in the last ditch attempt to save her, Kurona, whom maddened by grief, forced to absorb Nashiro into her own body, turned her into kagune-like membranes that covered all over her shoulder and stomach. Sadly, as Kanou coldly stated later, Nashiro turned out not survived the procedure and dies.

She looks just like Kurona except her hair has been turned white and has a white eye color. She wears a white cloak with an eye symbol on the hood and wears a mask with horizontal black and white lines with an eyehole on the left side for her kakugan.

During her youth she was very happy, cheerful, and childish for her age. However, she went under a dramatic change after her parents' death as she was experimented on and has completely given up being human and has embraced her new ghoul identity. She is very nihlisticc and is glad to have left the "twisted world" that humans live in.

She cherishes her sister Kurona more than anything as she is willing to abandon mission and objectives just to save her sister and vise versa. Since she is the last member of her family, she's willing to protect her at any cost. 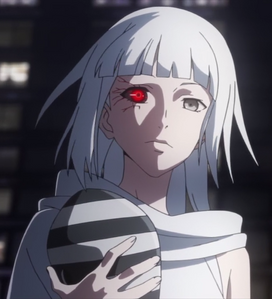 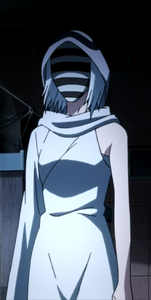 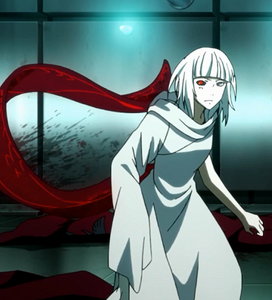 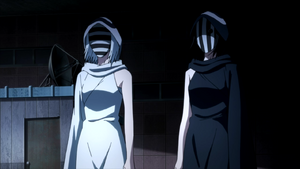 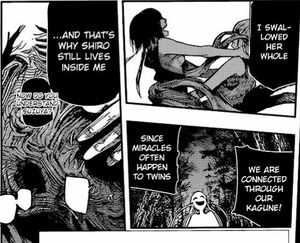 Nashiro when assimilaited by Kurona as the last ditch attempt to save her life, which failed.