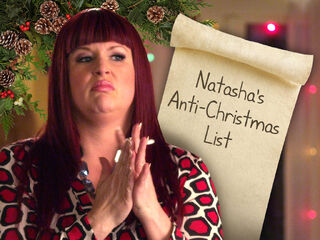 Natacha Is the main antagonist of the nickelodeon movie Santa Hunters.

She was portrayed by April Telek

She's the girlfriend of Charlie the uncle of Alex and Elizabeth, who is the father of Zoey and Richard, she doesn't like christmas or the story of the kids believing in Santa Claus. She doesn't seems happy when her and Charlie are invited to the christmas party of Alex and Zoey father, one night when Zoey Richard Alex and Elizabeth wanted the help of Charlie, Natacha scream after seeing the kids, and told them Santa Claus doesn't exist.

Because she tell the story of a little girl who have the same name as her, who wanted to have a pink princess for christmas, but she never had the doll she wanted because she found a other doll instead of the doll she wanted. The kids doesn't know  she talked about her childhood, so the same night they heard a noise, and go out and see the sleed of Santa. Now believing he does exist they run out the house to chase him, but she wasn't happy when the kids gave up the discovery, she wanted to steal santa sled and make the magic disappear and wanted to show that Santa exist for ruined christmas.

when Charlie Santa and the kids are in the tree house, she take off the ladder, but when she tries to get away she fall asleep, later when Santa and Charlie retun her to her home, Santa finally give her the doll she wanted maybe making her redeemed herself for her bad behavior Santa and Charlie leave.

Retrieved from "https://villains.fandom.com/wiki/Natacha?oldid=4098490"
Community content is available under CC-BY-SA unless otherwise noted.