Destroy the Park and start WWIII.

Kill Mordecai, Rigby, Benson, Thomas, Pops, Skips, Muscle Man, High Five Ghost, and anyone who would ever try to stop her or oppose her.
Destroy the United States.
Destroy the White House (all failed).

Natalie is a Russian spy and the main antagonist of the Regular Show two-part special "The Real Thomas". She is the former partner turned arch-enemy of Thomas/Nikolai.

She was voiced by Laura Bailey.

She first appeared as Benson's new girlfriend after he and Audrey broke up, which nobody seems to remember. She pretends to be a school teacher named Natalie and goes on a date with Benson. Later, after Mordecai and Rigby find Pops and Skips tied up in a secret room Natalia and Benson arrive, then Natalie puts Benson in handcuffs and pushes him into the secret room. She then reveals herself as a Russian spy and the partner of Thomas who was really a Russian spy named Nikolai.

Thomas explains his backstory and why he came to the park in the first place. In Russia, parks are outdated so he and Natalia were sent to infiltrate an American park and steal it for themselves, so over the years while Thomas was working at the park he and Natalia were building jet engines into the park so it could fly over to the Russian boarder, thus becoming Russian property. Natalia announces their new orders from General Romanoff and they depart, taking the park crew hostage.

The park then takes flight and heads straight for Russia. The park crew then manages to break free and fight back. On a helicopter Natalia and Thomas are confronted by Mordecai, Rigby and Benson, suddenly Natalia reveals to Thomas their true plans: to bypass the U.S-Russia Nuclear Arms Treaty (which calls for Russia to never fire a missile at the U.S.A and vice versa) and bring a part of the U.S to their missile, starting and finishing with the chunk of the park, which would in turn start World War III. Nikolai, completely unaware of this ulterior motive, is horrified as he never intended to hurt anyone. With some convincing from Mordecai, Rigby and Benson, Thomas then realizes that the park was like a home to him and can't go through with the plan. He and Natalie struggle for the control box, which causes Natalie to fall off the helicopter and get eaten by a whale, leaving a sorrowful Benson who believed they still could've worked out. 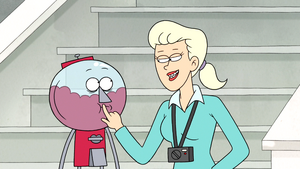 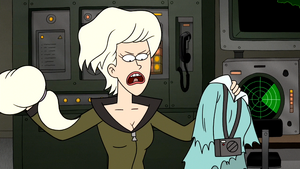 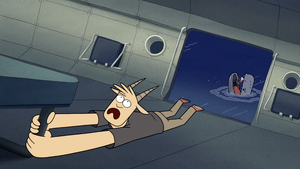