Natalya Neidhart is a WWE wrestler, a former WWE Divas Champion, and one of the cast members of reality TV show, Total Divas. When she debut until summer 2017, she was a heel. Currently, she is a face on the Raw brand.

Natalya's villainous path began when she made her debut on SmackDown and joined Victoria in attacking Michelle McCool and Cherry. She would continue her alliance with Victoria and would beat down various Divas such as Cherry, Kelly Kelly, and Maria Kanellis. In 2009, Natalya was moved to the ECW brand, where she, Tyson Kidd, and David Hart Smith formed The Hart Dynasty; with their tagline being that they were "better than the best." The villainous trio moved to SmackDown later that year, where Natalya mostly feuded with Eve Torres. Natalya's first villainous run ended at WrestleMania 26, when she and other members of the Hart family helped Bret Hart defeat Vince McMahon.

Natalya turned back into a villainess on August 5, 2011 when she attacked AJ Lee after defeating her in singles action. The attack was Natalya's show of solidarity to Beth Phoenix, who attacked Kelly Kelly days prior on Raw. A week later, Natalya aligned with Beth to form The Divas of Doom, and they spent several months torturing Divas such as AJ, Kaitlyn, Eve Torres, Kelly Kelly, and Alicia Fox. By 2012, Natalya would feud with Tamina Snuka on SmackDown and Superstars, and would start a feud with Kaitlyn due to Natalya accusing her of flirting with her boyfriend, Tyson Kidd. Natalya's second run as a villainess ended in the fall of 2012.

After nearly three years as a babyface, Natalya turned heel on February 23, 2015 when she interfered during a rematch for the WWE Tag Team Championship from Fastlane, resulting in a DQ win for The Usos, and Kidd and Cesaro retaining. Three days later on SmackDown, the evil Natalya defeated Naomi after using her injured ankle as a distraction. Natalya continued displaying her villainous persona on the following edition of SmackDown, doing so while at ringside during Kidd and Cesaro's match against Los Matadores. With the referee distracted, Natalya tripped up El Torito, allowing Kidd and Cesaro to get the victory. In the time since then, Natalya has portrayed a tweener before reverting back to being a full-time babyface due to Kidd and Cesaro's feud with The New Day.

Natalya turned villainous at the Money In The Bank PPV on June 19, 2016, doing so after she and Becky Lynch lost a tag team match against WWE Women's Champion Charlotte Flair and Dana Brooke. After the match ended, Natalya attacked Becky and left the ring as a heel for the first time in over a year. On the following night's Raw, the evil Natalya again attacked Becky backstage and explained her villainous actions at the PPV, stating that she's focusing on herself. Natalya defeated Becky at Battleground, after both women were drafted to SmackDown on the returning brand split in June, only to lose the rematch on SmackDown.

Natalya campaigned to become the captain of SmackDown's women's team at Survivor Series, only to lose that spot to Nikki Bella on October 25. She ended up becoming team coach, but after Nikki was attacked at Survivor Series, Natalya replaced her in the match, which Team Raw won. Carmella was accused of attacking Nikki, but she would name Natalya as the actual attacker at TLC. Natalya denied the accusations for weeks, but on November 20, Natalya boldly admitted to attacking Nikki at Survivor Series, stating that both Nikki and Brie were given opportunities that she deserved. Natalya stated that she had always despised Nikki, and even said that John Cena would never marry her.

A list of Natalya's villainous characteristics included her arrogance, her viciousness, and being a bit of a bully to other Divas. In her first heel run, Natalya often gave an evil laugh. 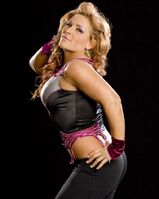 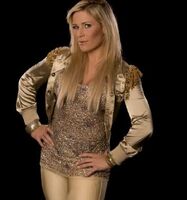 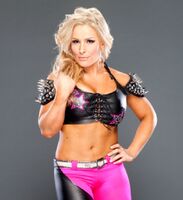 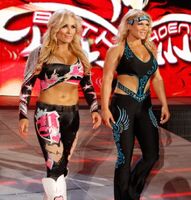 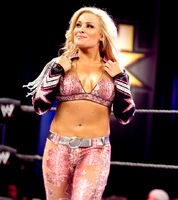 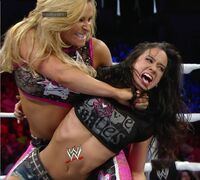 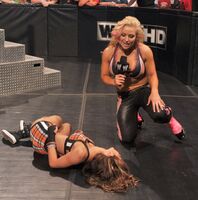 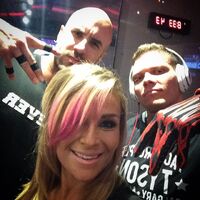 Natalya Neidhart with Cesaro and Kidd. 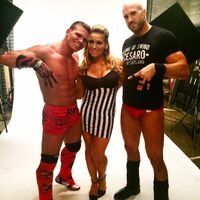 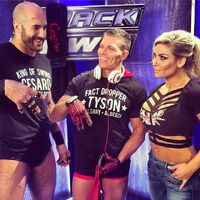 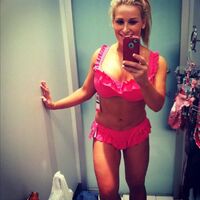 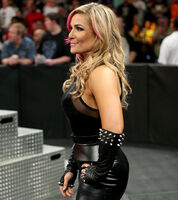 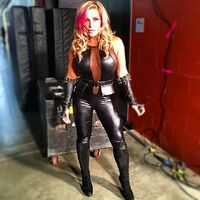 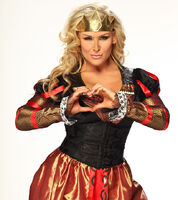 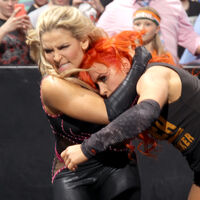 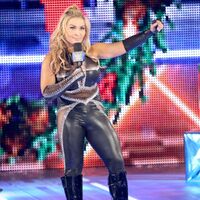