Kill people to take their supplies.

Nate is one of the major characters of Telltale's The Walking Dead: 400 Days, serving as the main antagonist of Wyatt's Story, and the deuteragonist of Russell's Story. He is an unstable, insane and unpredictable raider who has no qualms about killing and stealing.

During the zombie apocalypse, Nate went around in his signature truck terrorizing people on the road. Eddie accidentally killed Nate's friend, so he started chasing him and Wyatt in his truck. After he got into a crash they thought they lost him. When either Wyatt or Eddie gets out of their car to help a wounded man he pulled up to Wyatt/ Eddie and brutally attacked them. They manage to shake him off and escape with Nate firing. Should the player choose for Wyatt to stay in the car and Eddie go help the man, he will try to break into their car with a gun and Wyatt will have no choice but to leave Eddie behind and drive off. If Wyatt went out to help the man but left him then Nate will be seen killing him in the credits.

He appears in Russell's campaign as the deuteragonist and later main antagonist based on opinion. Russell, who was on the road, gets picked up by Nate in his truck. Nate said some very bawdy and suggestive comments to him and almost got him killed. When they arrive at a diner they are attacked. When they sneak around they find out that their attacker was an old man trying to defend his wife and he begs them to leave them alone. Nate however wants to rob and kill them. After this, Russell leaves him in disgust, while Nate kills the couple anyway seemingly with pleasure. If Russell chooses to stay he will happily gun down the old couple and proceed to take everything as Russell is left in shock. What happens to Nate after this is unknown. 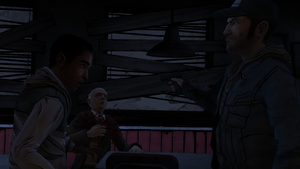 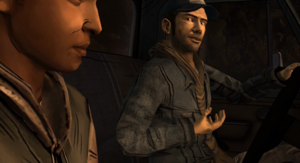 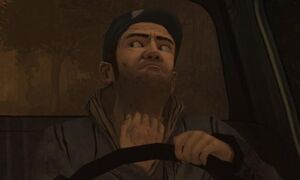