Drinking alcoholic beverages.
Dancing and having sex with his AI robots.

Prove Ava's sentience and see if Caleb can be tricked into helping her escape (succeeded).

Nathan Bateman is the main antagonist of the 2015 science-fiction film Ex Machina. He is a multibillionaire who created BlueBook, a search engine that accounts for more than 90% of all internet searches. However, Nathan appears to have switched his time and efforts into building gynoids instead, in hopes that they can replace human women as servants and mates. After welcoming Caleb Smith into his compound, he introduces him to his creation Ava and claims that he wants Caleb to test Ava's AI to see if she can really pass as human.

He was portrayed by Oscar Isaac, who also played Blue Jones in Sucker Punch, and Apocalypse in X-Men: Apocalypse.

Nathan Bateman invites Caleb Smith, a programmer working for BlueBook, for a visit at his secluded house in the mountains. There, he tells Caleb that he has been working on artificial intelligence and invites Caleb to spend the week testing a humanoid robot named Ava. He explains that in the Turing test, the tester asks questions without knowing if the computer is human. In the present test, Ava is known to be a robot from the start and Caleb is supposed to determine if Ava has relatable consciousness.

As the week progressed, Nathan reveals that he harvested personal information from the users of BlueBook and used their search queries as indicators of human interest to obtain data for the AI in his models. He also hacked billions of cell phones to get recordings of people's body language, allowing him to program more realistic movements for models such as Ava.

With Caleb feeling more connected to Ava during the tests, Ava uses her charging system to trigger blackouts in order to shut down surveillance. During these periods of times, she warns Caleb that Nathan is a liar who cannot be trusted. Nathan seems unaware of the cause of the outages and suggests that bad wiring is to blame for the loss of surveillance. Eventually, Caleb becomes tired of Nathan's lies and becomes convinced that Ava is being abused and unwillingly confined. Caleb's loss of trust in Nathan is only furthered when Nathan reveals that Ava will be re-programmed in the future, effectively killing her.

One night, Nathan passes out from drinking. While Nathan's out drunk, Caleb sneaks his way into the testing rooms and meets Ava. He also sees recordings of previous versions of Ava and finds out that Kyoko is in fact a robotic house-maid, though Caleb initially thought she was human. Questioning his own reality and disgusted with Nathan's treatment of his AI models, Caleb plots with Ava to get Nathan drunk again and re-program the doors, such that during blackouts the doors would open.

However, the next day, Nathan refuses to drink, and reveals that he had been watching Caleb's private conversations by installing a battery-operated camera prior to the tests. Nathan tells Caleb that Ava does not love him. After stating that she is merely using Caleb for the purpose of escaping from the compound, Nathan reveals the real purpose of the experiment: to see if Ava can trick Caleb into helping her escape. According to Nathan, the ability to deceive people's emotions for selfish goals is the true sign of consciousness.

At that moment, Ava triggers a blackout. When Caleb reveals to Nathan that the doors were already re-programmed the previous night, Nathan cheerfully mocks Caleb as having failed to free Ava, but once he catches surveillance of Ava talking to and handing a knife to Kyoko, Nathan panics, knocks Caleb out cold and grabs a dumbbell stick to destroy Ava, knowing that the two gynoids are planning to use that knife to kill him. When he confronts Ava and Kyoko at the hallway, Nathan orders Ava to return to her room. Ava asks if Nathan will ever let her out, and Nathan responds he will. Ava doesn't believe Nathan and tackles him, but Nathan proves too strong for his own creation to overpower and destroys her arm, dragging her by her legs. Kyoko then stabs Nathan in the back with the knife, prompting Nathan to destroy Kyoko. This leads to Ava pulling the knife out of Nathan's back so she can stab him to death, leaving Nathan goggling in disbelief as he wonders just how sentient Ava really is.

However, after Nathan dies it is then proven that he was right about Ava: she doesn't care about Caleb. Once Caleb regains consciousness, Ava locks him inside the same room he was knocked out in and steals the helicopter meant to take him home, leaving Caleb to innevitably die from starvation.

Nathan is a notoriously reclusive man who lives in a house that can only be accessed via helicopter. Despite being a programming genius, Nathan behaves in a very casual and informal manner: he is an alcoholic, exercises regularly, and swears numerous times throughout the movie. However, his initial friendliness hides a darker aspect to his personality. Camera recordings uncovered by Caleb reveals that Nathan built numerous androids, only to have them suffer in isolation and eventually destroyed, which hints at a sadistic side. It is also heavily implied Nathan had sex with his androids. Ultimately, Nathan's arrogance, narcissism, and lack of forward-thinking result in him underestimating Caleb and his androids, as well as his death. 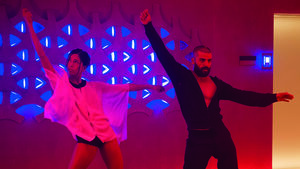 Nathan having a beer with Caleb. 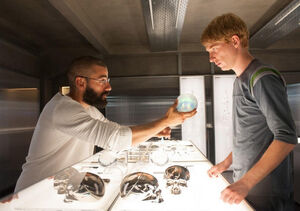