Need for Speed: Most Wanted

Bring an end to street racing in Rockport City by arresting every Blacklist racer (succeeded, to an extent).

Arrest the player once and for all (failed).
Get his revenge on the player in Palmont City for their escape from Rockport (formerly).

He was portrayed by Dean McKenzie, with his voice being provided by Chris Williams.

Need for Speed: Most Wanted

Cross debuts in the prologue of Need for Speed: Most Wanted when the Player arrives in Rockport to look for a race. After following Mia Townsend, suddenly they are stopped by Cross and Mia manages to escape. Cross steps out of his Corvette C6, showing the Player his police badge and chuckles. Cross compliments the Player’s BMW M3 GTR before commenting on it being a race car. Cross' unnamed female partner asks the Player to take a peek under the hood and Cross agrees, mocking the Player. Cross then threatens to tear the Player’s car apart and the entire racing scene of Rockport in general. He opens the door and demands the Player exit the car; however, the RPD send a radio coded message about a street race going on, and to Cross’ disappointment, he shuts the door and warns the player they won't be so lucky. With that said, Cross pulls out his key and keys the Player’s car, sarcastically replying "Nice pinstripe!" He then gets into his Corvette with his partner and drives off.

Later on in the game, after Razor tampers with the Player’s car and they loses the race, the RPD arrive and with no way to escape, Cross comes in the scene and arrests the Player alongside his unnamed female partner. Due to lack of evidence, the Player is released and picked up by Mia.

Cross will later call the Player twice and mock him in the calls. Hereafter, when the Player hits Blacklist member #5, Cross will tell the player that he’s no longer going to be "Mr. Nice Guy", and he says he’ll take care of the Player himself.

At the epilogue of the game, Cross will arrive on the scene and ask where the Player went. Mia told him that the Player got away. Impatient, Cross orders his unnamed female partner that he wants every police unit after the Player. Soon, the entire RPD chase the Player and Cross calls the Player one last time, "thanking him" for arresting the entire Blacklist. Subsequently, he demands the Player to give himself up. Finally, the Player manages to escape via the old bridge and jumps successfully. Cross is seen braking hard while the Player escapes. After that, Cross issues a warrant for the Player, ranking them on the National Most Wanted list.

Cross makes another appearance in Need for Speed: Carbon. Because of his failure to capture the Player previously, Cross was likely fired by the Rockport Police Department, and he now works as a bounty hunter. As such, he manages to catch up to the Player who is driving through Carbon Canyon to Palmont City and smashes into the rear of the BMW M3 GTR with his Corvette C6 Z06. He continues to pursue the Player's BMW, until they totaled it in a construction zone. Cross rushes over to his cornered foe, informing them he has a score to settle from Rockport. Before he could arrest the Player, Darius arrives and "bails" them from Cross, additionally reprimanding the latter for bounty hunting in the former's territory without approval. Afterwards, Cross leaves and drives off. Before he left and according to a deleted scene, Cross rams the Player's BMW a final time with his Corvette in reverse, presumably damaging its engine, going on to sneeringly apologize and laugh at the Player.

Later, Cross will be seen spying on the Player in a scene between them and Nikki, who are talking about the failed race that made the Player leave Palmont.

Cross is last seen at the courthouse in Palmont. Paid by Dairus, Cross will cuff the Player and toss the Player's keys to Darius. Nikki arrives and Cross eventually hands the Player's keys to her. Nikki reaches an obligation to pay for the Player's bounty, in a deal that she will race for the Player's crew. Finally, Cross tells Nikki that he’s just a bounty hunter and reminds her to make sure he gets paid. He drives away and is not seen for the rest of the game, implying that he made amends and forgiven the Player, no longer mad at them for their previous crimes.

A voice recording from Cross regarding The House is picked up and listened to in the mission "Covert Courier". After hearing it, Jessica Miller believes that Lina Navarro has the Silver Rock Police Department in her payroll, and says "That's NOT good", viewing it as a serious threat. The recording revealed Cross was helping a police officer in Fortune Valley to arrest Gallo Rivera, in addition to turning up the heat on his crew, Silver Six. An unhappy Cross criticized the city's police for being corrupt and said he is going back to Rockport, having enough. Whether or not he was still a bounty hunter or an officer in Fortune Valley, Cross is not heard from again for the rest of the game, assuming he is returning to Rockport to continue his previous job once again.

In Need for Speed: Most Wanted, Cross was seen as an arrogant, rude, and sarcastic police officer who belittled the Player in every positive regard. Cross’ dialogue in Need for Speed: Most Wanted suggests he had a short temper, especially with street racers, and he doesn’t like the racers one bit. This is especially seen during the last scene where he shouts “Everyone!” to his female partner. Cross also has even threatened to pound the Player into the pavement without any remorse. This is likely due to the RPD’s maximum pressure to stop street racing at all costs in Rockport.

In Need for Speed: Carbon, Cross is seen as more sinister, yet less out front. He performs Darius’ dirty business behind the scenes and even spies on the Player and Nikki during one scene. Cross is selfishly and greedily motivated by money rather than performing his duty, and considered the Player his personal enemy. In spite of this, Cross won’t hesitate to cause public property damage, or even use physical force as he totals the Player’s BMW, and can be seen hitting a road sign while the Player speaks to Darius. Cross will also throw the Player to the ground just to serve his client Darius. However, Cross does have a change of heart when Nikki arrives suggesting that he too does not like Darius, for the latter was indirectly responsible for the Player's actions over in Rockport and would disrespectfully mispronounce his name a couple of times.

Despite his harsh exterior and short temper, molded by the pressure of the RPD to bring an end to the street racing scene, Cross is cordial enough to give the Player an opportunity to stop racing in his city or they will face the consequences. Upon further revelation about Darius manipulating the Player to leave Palmont and lying to tarnish the Player's good name, Cross mellowed out a bit more and no longer saw the Player as his foe, especially because he wasn't a cop and had an obligation to bring them to justice, yet he was satisfied with Nikki for paying the bounty on the Player. Not only that, Cross has a strong contempt towards corruption, as exemplified by the behavior within Fortune Valley's law enforcement, when he told a corrupt officer working for The House cartel and Lina Navarro that he was dissatisfied by their abuse of power and immoral methods of apprehending criminals. Although his hatred towards corruption being somewhat hypocritical, for he — during his police days — used to threaten or pick on the Player over the phone whenever he loses his patience, nevertheless, Cross grew to respect the Player and takes pity of them, by demonstrating a degree of mercy towards his enemies, like Gallo Rivera, while fairly upholding the law.

In Need for Speed: Most Wanted, Cross is seen wearing a blue button-up shirt with short sleeves, suspenders, and jeans. He sports an Afro and has brown eyes. He also has a pistol on his side.

In Need for Speed: Carbon, Cross only wears a button-up shirt, pants, and has braids instead.

Cross drives a Chevrolet Corvette in both games featuring a unique vinyl. In Most Wanted, Cross’ Corvette is a standard Corvette C6, but in Carbon, he drives a Corvette C6 Z06. 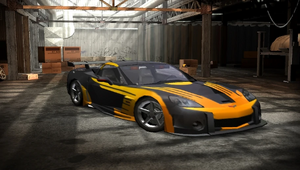 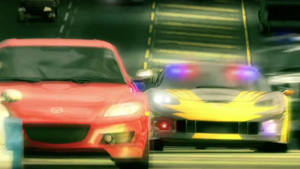 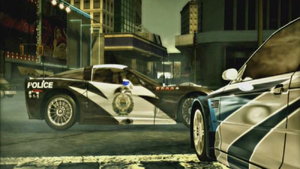 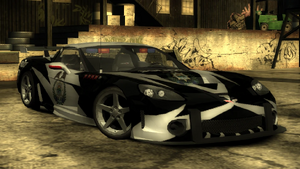 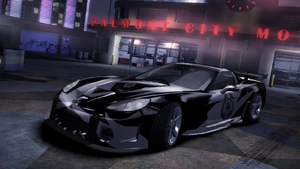 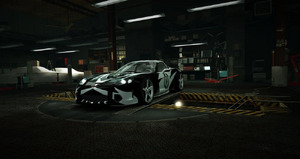 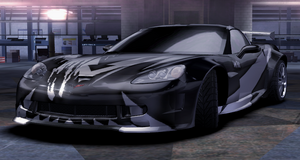 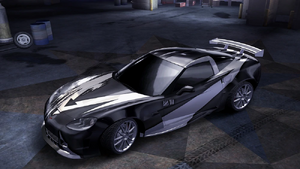