Keep his position as mayor. (succeeded until his death)

Power-Hungry Elitist
Nathaniel Northwest is a posthumous antagonist from the Disney animated television series Gravity Falls. He was one of the first mayors of the town, and was a corrupt and vile individual who used conspiracy and cover-ups to keep his position.

Nathaniel Northwest was originally a local nobody who lived in the city of Gravity Falls, Oregon as a manure shovelling village idiot. However, when President Quentin Trembley, Gravity Falls' founder, was impeached as President of the United States due his disappearance by encasing himself in a block of solid peanut brittle to become immortal, the U.S. government picked up Nathaniel and secretly made him the mayor and supposed founder of the town. The Northwest Cover-Up, as it was called, gained Northwest considerable wealth and status in the community, which he immediately let go to his head.

After becoming rich, Nathaniel convinced the workers of the town, including Archibald Corduroy, to deforest a section of Gravity Falls for the construction of Northwest Manor, in return for allowing them to partake in the manor's festivities when the construction was complete. Though many lives were lost in the extreme conditions during the construction, the manor was eventually finished, Northwest however, laughed at the commoners and shut the gates refusing to let them inside. Even when a flood hit that began washing away the waiting workers, Northwest looked down on them and mocked them as they drowned, leading Corduroy to use his dying breath to curse the Northwests, vowing to return in 150 years to murder his descendants if the townsfolk were not yet allowed to enter. Fearing Corduroy's revenge, Nathaniel wrote a message for his descendants to warn them about Corduroy's curse.

Northwest continued his eccentric lifestyle of embezzlement, conspiracy, and destruction, until one day he tried to prove himself a wizard by eating a whole oak tree. He choked and died, though those who knew him did not mourn his passing. However, due to the Northwest Cover-Up, Nathaniel Northwest was immortalized in the town's history, with statues and paintings of him adorning the town. No one on the town ever realized that Nathaniel had been a fraud, minus the U.S. government and the dream demon Bill Cipher.

After his passing, the Northwests would remain influential people in the community, with Preston Northwest becoming one of the wealthiest men in the town. Unknown to many, however, many of Nathaniel's descendants took advantage of the wealth and protection Nathaniel got for the family to commit numerous misdeeds and crimes like betraying Native tribes, embezzling from the town and slaughtering dozens of animals.

In the season one episode "Irrational Treasure", Dipper and Mabel discover the secrets behind the Northwest Cover-Up, eventually finding the government documents detailing the conspiracy. Though Sheriff Blubs and Officer Durland try their best to stop the twins and even deport them under the government's order to not reveal the truth, they discover Quentin Trembley, who once unfrozen, gives vacations to the officers so they will not capture them. At the end, outraged that Mabel doesn't see the necessity of exposing Nathaniel, Dipper gives the incriminatory evidence to Pacifica Northwest, Mabel's rival and Nathaniel's latest descendant, which upsets her. However, it's later implied that Preston covered up the evidence offscreen.

In the season two episode "Northwest Mansion Mystery", Archibald Corduroy makes good on his curse by returning to the manor as a ghost 150 years after his death, revealing the injustice the Northwest family showed him and his colleges. He plans to exact his revenge by turning everyone in the manor into trees if they do not open the manor to the populace, and while Preston refuses and even tries to hide himself and his family until Archibald leaves, Pacifica opens the doors and lifts the curse, righting the wrongs of her ancestor and allowing Corduroy to finally move on to the afterlife to rest in peace.

In the series finale "Weirdmaggedon 3: Take Back the Falls", following Bill Cipher's defeat, Preston is forced to sell the Northwest Mansion to retain his fortune after attempting to ally himself with Bill, much to his dismay. Ironically, the town's former hillbilly Old Man McGucket ends up buying the manor, thus in some way allowing the townsfolk to take over the manor they built and finally getting back at the late Nathaniel Northwest and his family. 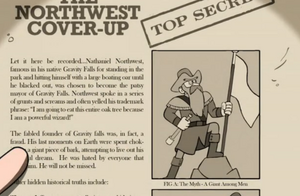 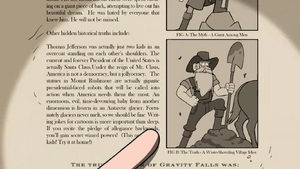 ... while also revealing his true identity as a waste-shovelling local nobody. 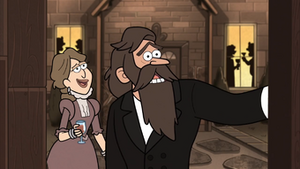 Northwest laughing at the common folk and breaking his promise, leaving them to drown. 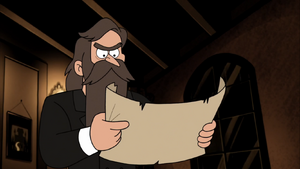 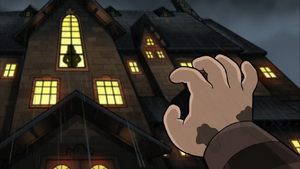 Northwest looks down at Corduroy dying below. 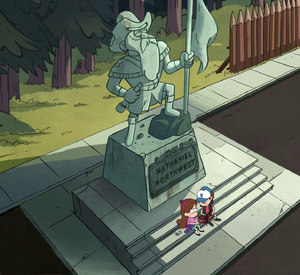