Highschool Student (prior to reanimation)

Follower of Ozaki (as Jinrou)

To help the villagers kill every shiki in Sotoba (failed).

To make sure Megumi and Tatsumi are dead (failed).
To go to the city and have a new life there (failed).

Natsuno Koide is one of the main protagonists of the anime/manga Shiki. Despite being one of the show's main protagonists (and being seen as justified by many), he commits various morally ambiguous acts during the second half of the series that could be considered villainous as his reasoning for certain actions was rather selfish and cruel. The series itself is purposely written this way, to make it's audience think about morality, and so whether or not Yuuki is a villain is left up to the viewer.

He was voiced by Kōki Uchiyama in the Japanese version, and by Jerry Jewell in the English dubbed version.

a 15 year old boy who lives and attends school in Sotoba. He is in the same grade as Megumi. He moved to Sotoba last year. His parents preferred to live in the countryside, so they came to Sotoba. He hates living in the village and would prefer to be in the city. Originally a city dweller, Natsuno reluctantly moved to Sotoba with his parents when they wanted a change of environment. He is usually seen wandering around the bus stop, planning to return to the city one day. Natsuno hates Sotoba and how closeminded people within it were, especially hating the gossiping that is going around everday. He often exhibits a cold exterior, especially disliking Megumi Shimizu, who has a stalker crush on him. However he is friendly to some, such as Tohru, an amiable boy, who persistently tries to become his friend.

Natsuno is a young man with blue-violet hair, violet eyes and slightly tan skin. He would wear different clothing other than his school uniform, which shows his previous life as a city dweller. After he came back as a shiki, his skin gains a pale complexion with his hair in a darker tone. In addition, his eyes have become darker with a more cold expression and they lost their light glint.

Natsuno was the very first person to realise the existence of the shiki or "the risen", because of Megumi, who had risen after death and continued stalking him like she used to before her death. As a result of sleepless nights due to nightmares about Megumi, he had a sleepover at Tohru's place, where he witnessed Megumi entering his house and killing Tohru because he was closer to Natsuno than she ever was. After Tohru's death, he was sure of the existence of the shiki and asked Toshio Ozaki, the village doctor, whether he thinks Megumi really died or not. Ozaki soon began to get suspicious of the Kirishikis who recently moved into Kanemasa, a castle on top of a hill to be the reason behind all the summer's deaths. He then gathered Megumi's friend Kaori and her little brother Akira to dig up Megumi's coffin and confirm if she was still alive and her coffin was in fact empty.

After discovering that Megumi had risen from death, Natsuno gets attacked by the risen Tohru whom Megumi had killed earlier the same summer. He manages to escape from Tohru and it turns out Tatsumi had ordered him as a payback for digging up Megumi's grave fearlessly. He soon then gets confronted by Megumi who tries to save him but Tatsumi also comes as a distraction for Tohru to bite Natsuno and so he did. Tohru would come every night by Natsuno's window to suck some blood. The last night before Natsuno finally dies, Natsuno tells Tohru how deep inside he always knew he would never leave Sotoba causing Tohru to break down crying before killing him.

As a Jinrou, he never really died, just changed. His father called the city funeral home, mistakening him for dead. As they came, they found that he had woken up, so they got sent back with an empty coffin. After rising up Natsuno's personality changes. He despises the shiki and wants to exterminate every single one of them as a payback for killing Tohru, especially willing to exterminate Megumi and Tatsumi as they were the ones standing behind his best friend Tohru's death. He explains everything to doctor Ozaki and bites him so that the other shiki can't hypnotise or control Ozaki into following their orders. He orders Ozaki to expose the shiki to the villagers and he does so, starting with Chizuru Kirishiki, a woman from the Kanemasa mansion. After killing Chizuru in front of villagers, Ozaki begins the hunt on the risen.

After most shiki were already dead. Natsuno goes to look out for Tatsumi, however in the manga he also goes to kill Megumi before Tatsumi. In the anime it's a nostalgic flashback of Natsuno waiting for the bus that distracts Megumi as she crosses the road causing her to get caught. In the manga, Natsuno calls out her name and distracts her as she crosses the road causing her to get hit by car and then staked. In the anime, he has a fight with Tatsumi where he ends up pushing both Tatsumi and himself in a hole where the villagers would throw the dead corpses of the shiki.

The End of Yuuki

After Natsuno and Tatsumi fall in a hole, he takes out both Tatsumi and himself using dynamite. In the manga they get stabbed by the sharp rocks in the hole. 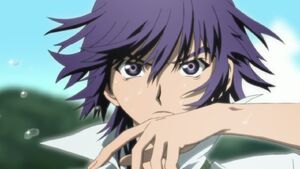 Add a photo to this gallery
Retrieved from "https://villains.fandom.com/wiki/Natsuno_Koide?oldid=4214914"
Community content is available under CC-BY-SA unless otherwise noted.