Titan of the Depths

Guardian of the Bearded Lady's Waters.

Nautilus, also known as the Titan of the Depths, is a villainous playable character on the multiplayer online battle arena game League of Legends, who serves as a major antagonist of the short story "Dead in the Water".

A legendary spirit of the depths, Nautilus was once a drowned salvage diver who was transformed by the power of the Bearded Lady Nagakabouros. When sailors venture her waters, they best be careful, or else Nautilus will rise to pull them under.

The 93rd champion added in the game, Nautilus was released on February 14, 2012, and is most commonly played as a support.

Before he became Titan of the Depths, Nautilus was just a man; a salvage diver near the Blue Flame Isles. A hefty freediver, Nautilus was a superstitious man, requesting that instead of being paid in wages for his salvages, the captain should instead toss a coin overboard to the Bearded Lady, Nagakabouros, to ensure that he and the rest of the crew would have a safe return.

After many years, the ship was bought out at the port and the captain was replaced. The new captain requested that Nautilus wear a heavy suit of brass and iron, which could withstand the pressure of an unusually murky wreck near the ocean floor. When Nautilus was lowered into the water by an anchor, he requested that the captain pay the Bearded Lady's tithe, but the captain laughed and said they would pay it after the treasure was collected. But Nautilus quickly realized the captain was lying; he wasn't after treasure but the ancient power hidden at the ocean floor. And as Nautilus sank he found himself dragged beneath the depths by the horrifying eldritch power of Nagakabouros.

When Nautilus awoke, he was no longer a man but an enormous undead titan, trapped within the confines of the metal suit. His captain and his crew were nowhere to be found in Bilgewater, but Nautilus remembered their foolishness and his captain's broken promise.

Nautilus vowed that day to make certain that everyone pay the tithe of the Bearded Lady, and ships that did not would feel the wrath of Nautilus himself and be dragged beneath the waves by his anchor.

In game, Nautilus is a vanguard-type champion, an offensive tank that initiates combat and absorbs heavy damage for his allies. His passive, Staggering Blow, lets strikes from his anchor briefly root his enemies the first time he hits. With Dredge Line, Nautilus throws his anchor to pull either himself or his target, and with Riptide he can send a shockwave in the earth to damage and slow enemies. Titan's Wrath creates a shield around Nautilus, surrounding himself with dark magic to block damage. His ultimate, Depth Charge, sends a shockwave towards opponents that stun enemies and knock them into the air.

As a sailor, Nautilus was very superstitious and subservient to Nagakabouros, and with his new role as the Titan of the Depths, Nautilus is even more devoted to this mindset. While Nautilus is vengeful in his quest (after his captain's betrayal), Nautilus very rarely shows anger, instead appearing aloof and smug to ships he encounters. This shows that Nautilus is very aware of his titanic, menacing appearance and enjoys watching sailors cower, using this to his advantage when intimidating them to pay the tithe. It also displays quite a bit of arrogance, as Nautilus knows he is invulnerable and the ships stand no chance against him. Nautilus also does not enjoy company and prefers to be left alone, as shown by his relationship to Fizz, whose antics annoy him eternally.

Nautilus as he appears in Legends of Runeterra.

Nautilus' anchor sinking the Moon Serpent in "Dead in the Water". 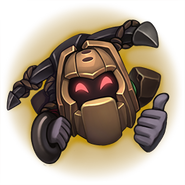 Nautilus' emote, "NAUT BAD".
Add a photo to this gallery

Retrieved from "https://villains.fandom.com/wiki/Nautilus?oldid=3899927"
Community content is available under CC-BY-SA unless otherwise noted.