Senhora do Destino/Mistress Of Destiny

She was portrayed by Renata Sorrah and in her youth, by Adriana Esteves, who also played Carminha, in Avenida Brasil.

Nazaré was a prostitute who kidnapped Maria do Carmo's daughter Lindalva, to confirm a false pregnancy to a rich man, José Carlos, in order to get rich herself.

She had a false identity called Lourdes, which used to deceive José Carlos. After crossing the loads of trash and dodged a street inhabitant, she is saved by Maria do Carmo, where Nazaré earns the confidence of Do Carmo and her four children using her false identity and impersonatng a nurse. Since Reginaldo, one of Do Carmo sons, previously got hurt by a rock thrown to his head in the mob, "Lourdes" suggested to take him to the hospital. Outside there, she offers herself to take care of Lindalva and three of Do Carmo's sons while she takes Reginaldo to the hospital. After returning however, Do Carmo finds that Nazaré took her two months-old daughter away.

Nazaré then, blackmails her boss, Madame Berthe, to confirm her story, arming a farce, to feign that she gave birth to the girl, whom she after that called Isabel.

26 years later, Isabel turned into a beautiful young woman, who feels love, respect and complicity to the disturbed woman whom she thinks is her mother. Nazaré still lives with José Carlos and is always at war against Maria Cláudia, her stepdaughter, who has gone to live with her father after her mother, after being abandoned by her husband, succumb to depression and die.

Eventually in the soap opera, Nazaré finds herself under siege, with the help of many of Do Carmo's friends including Cláudia.

Even after discovering that she was kidnapped from her mother, it takes some time to Isabel to accept Do Carmo as her mother. Nazaré asks Isabel to forgive her, arguing that she kidnapped her because José Carlos forced her. Divided and sensitized, Isabel decides to stay with the shrew woman, because she was created by her as a mother, and she loves her too much. However, she eventually realized her true caliber.

Nazaré apparently dies after cafting herself from a bridge in the Paulo Afonso Waterfall in Bahia. She (supposedly) suicides herself after kidnapping Linda, the daughter of Isabel and her husband Edgard. Before Isabel, however, she redeems herself returning her the baby before casting herself to death. However, her former employee has a vision of a mysterious person, close to her house, leaving implicit that Nazaré was still alive.

Nazaré is responsible not only for kidnapping Lindalva/Isabel, but also for killing two persons by casting them down her house's stairs: her husband, José Carlos, and Djenane, a former prostitute who witnessed her fake parturition and then appeared to blackmail her. She also killed her paramour electrocuted, stole money from the bank, and tried to kill Claudia with a pair of scissors, in addition to her emotional blackmail to Isabel. 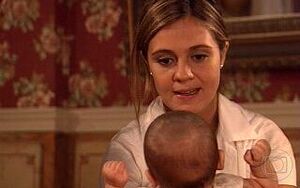 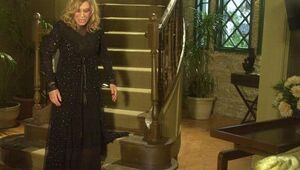 Nazaré in front of her house's stairs. 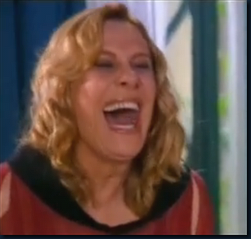 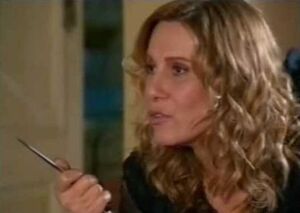 Nazaré with her pair of scissors. 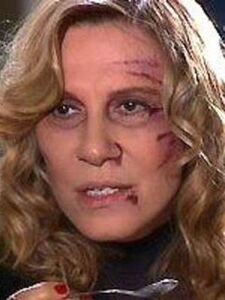 Nazaré after getting a beating from Do Carmo.

Nazaré fleeing from Do Carmo's family with Linda. 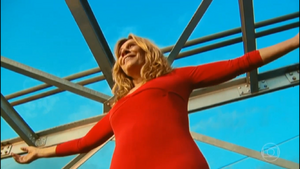 Nazaré's final moments before her death. 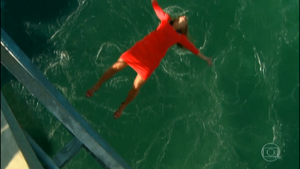 Nazaré's suicide by jumping from a bridge towards a river.