Villains Wiki
Register
Don't have an account?
Sign In
Advertisement
in: Partners in Crime, Fallen Heroes, Middle-Earth Villains,
and 30 more

Daughters to a King (formerly)

Go to Mordor and the Power Rings to their father (formerly; failed).

The Nazgûl Sisters (real names Riya and Yuka) are villains from the 2017 videogame Middle-earth: Shadow of War, and are the main antagonists in the story expansion, The Blade of Galadriel.

They were once Daughters to Emperor Sagong of a distant land in the farthest east of Middle-earth called the Kingdom of Shen. The sisters were sent to Mordor in order to recover the Ring of Power. They were able to slay two Nazgûl and take their rings, and succeeded in defeating the Nazgul's armies. Returning to their father, the rings soon influenced and corrupted them, and they eventually killed him. The sisters then took his throne, and eventually Sauron brought them to his service, who led them back to Mordor to become his servants.

After Sauron and Celebrimbor's battle, which ended with both trapped in the form of a flaming eyeball and the Witch-king defeated by Talion, the Sisters took the advantage of their masters' weakened state by attempting to take Mordor over themselves. After their defeat at the hands of Talion and Eltariel, they returned to serve Sauron. 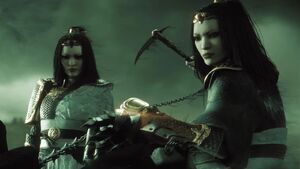 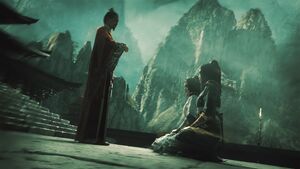 Riya and Yuka with their father, Emperor Sagong. 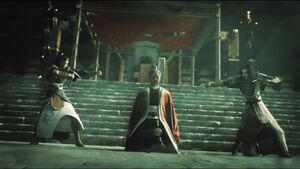 The sisters kill their father under the influence of the Nazgul rings. 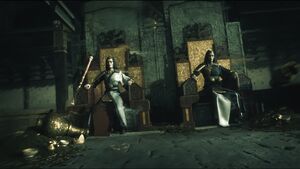 The sisters claiming their father's throne.