The Nazi School Teacher is an unnamed antagonist from the WWII-era Disney cartoon "Education For Death" - which was designed as propaganda against Nazi Germany, despite this the actions of many of the Nazis in the cartoon were quite similar to those in reality, albeit exaggerated (as is common in all propaganda).

In the alternate version of the Third Reich, The Nazi School Teacher is a minor but cruel villain who is introduced as a large muscular man who draws a picture of a rabbit and a fox, showing the fox devouring the rabbit - he then asks the children what they have learned from this: when one of the boys named Hans states sorrow for the demise of the rabbit, the Nazi School Teacher becomes furious and berates him, sending him to sit in a corner with a dunce hat whilst the other boys mock him.

The Nazi School Teacher then has the other children speak on the matter, each of the boys informs him the rabbit was a coward and deserved to die - that there was no place for weakness in the world. The Teacher congratulates the boys on the "correct" answer then bullies the lone boy into an angry rant in which the boy curses the rabbit.

The Nazi School Teacher is pleased by the new response and believes the boy has come around to the "proper" way of thinking - he then proceeds to tell his class that Germany will become like the fox and enslave all the "weak" nations of the world. 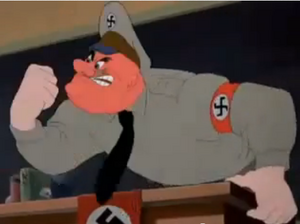 Retrieved from "https://villains.fandom.com/wiki/Nazi_School_Teacher?oldid=4277772"
Community content is available under CC-BY-SA unless otherwise noted.