Kill any and all who dares to steal their war booties.

Exterminate the village of Talvik.

The Nazi Zombies are the supporting antagonists of the splatter-film, Dead Snow along with its sequel - they are an entire army of Nazis under the command of Herzog and exist to do his bidding, as well as brutally murder and devour any that dare to steal Herzog's own stolen treasure.

The Nazi Zombies are the remains of a Nazi occupation in which Herzog and his men undertook a campaign of brutal mutilation, torture and terrorism upon the local population which climaxed in a mass-looting of the area near the end of the war.

The mass-looting finally caused the locals to revolt against their tormentors and gathering makeshift weaponry they massacred the Nazis that had killed so many of their friends and family, forcing Herzog and his men to flee into the snowy mountains with their stolen treasure, where they died of exposure.

Yet in death Herzog managed to survive as a demon zombie and resurrected the other Nazis to fight by his side, seeking out those who dared to trespass upon his land or steal his loot. How did they manage to become undead remains unknown.

Seven students, Martin, Roy, Liv, Hanna, Erlend, Vegard and Chris are on Easter vacation arrive at a small cabin near Øksfjord. The cabin is owned by Sara, Vegard's girlfriend. (Sara was slain by Nazi Zombies at the start of the movie before the arrival of seven students) The group begins to drink and party until a mysterious hiker arrives. He tells them the dark history of the region. The hiker then continues on his way.

That night, Vegard wakes to a figure placing something beneath the floorboards of the cabin. He calls out, believing it to be Sara, but she ignores him and leaves. Vegard follows, and finds her outside covered in blood. Vegard suddenly jolts awake in his bed, revealing it was a nightmare. Meanwhile, the hiker has set up camp in the mountains and is eating dinner when he is disturbed by a noise outside. He investigates, and is attacked and killed by a zombie wearing SS uniform.

The next morning, Vegard, fearing Sara's safety, is out looking for her, discovering the hiker's body in the process. He searches the area, falls through the snow into a cave, and is knocked unconscious. After sunset, Erlend finds an old wooden box filled with valuables and golden trinkets. They celebrate, and one of them pockets a gold coin. They eventually return the rest of the treasure to the box. Erlend goes to the outhouse where he and Chris have sex. Afterwards, Erlend returns to the cabin, and drops a gold coin. Chris is then attacked by a zombie and killed. The others leave the cabin to look for her, and find Sara's rucksack buried in the snow.

Upon returning to the cabin, they are attacked. Erlend is killed in an attempt to defend the cabin, and the others secure the building. Vegard comes around in the cave, discovering German firearms and helmets, as well as Sara's severed head. He is attacked, but escapes to the surface, where he is confronted by a zombie. Vegard stabs the zombie in the eye, but is knocked from the cliff side by a second assailant. Vegard is bitten in the neck by the zombie, whilst Vegard and a zombie hang from the cliff, using a zombie intestine as rope. He climbs back to the snowmobile, stitches his wounds, and mounts a machine gun to his snowmobile.

Meanwhile, the remaining four students decide to split up. The two men, Martin and Roy, attempt to distract the zombies, while the two women, Hanna and Liv, run for the cars and go for help. En route to the cars, the girls are ambushed by zombies. Liv is knocked out by the zombies and awakens to see them gutting her pulling out her intestines. Using a hand grenade, Liv commits suicide and kills her assailants. Hanna leads a zombie to a cliff edge, breaks the ice, and they fall. The pair survive, and Hanna kills the zombie.

Martin and Roy accidentally set fire to the cabin with Molotov cocktails. They escape, and arm themselves with power tools. More zombies attack, but they are aided by Vegard. During the attack Vegard is killed and Martin, in heightened state of fear and adrenaline, kills Hanna, who has returned to the cabin. Herzog arrives, leading a group of zombie soldiers. They attack, and Martin is bitten on the arm. To avoid becoming infected, he cuts off his arm with a chainsaw. After killing the remaining undeads, Martin and Roy attack Herzog, who calls upon hundreds of more zombies, that rise from under the snow. Whilst running from their attackers, Roy is hit in the head by a hammer, disemboweled by a tree branch, and killed by Herzog, who retrieves a watch from his pocket.

Martin realizes the zombies' intent, and retrieves the box from the ruined cabin. He returns the box to Herzog, and escapes to the car. There, he finds a gold coin in his pocket, just as Herzog smashes the window of the car.

In the first movie Martin and his friends draw the ire of Nazi zombies after unwittingly stealing their golds. At the end of the movie only Martin was left alive. Martin is then bitten on the arm, he is compelled to remove the infected arm with a chainsaw. After returning their golds to the Nazi zombies, Martin realizes he forgot a coin. The zombies, not wanting to give away their war booties even a single coin, chase after him. Their commander, Herzog, tenaciously holds on to Martin's car as he flees from Zombies. An oncoming truck slices off Herzog's arm, which remains in the car with Martin. After Martin is involved in an accident, he wakes in a hospital. The police refuses to believe his stories about zombies and charge him with the murder of his friends. To his horror, Martin finds that a surgeon has attached Herzog's arm to his stump. The zombie arm goes berserk and attacks everyone within reach. After Martin's undead arm kills several people against his will, he is sedated and strapped tightly to the bed.

Bobby, a young American tourist, sneaks into Martin's room when he hears rumors of a zombie attack. Impressed with Martin's zombie arm, Bobby frees Martin and tells him about the Zombie Squad, American professional zombie hunters. Before Bobby can contact them, the zombie arm throws Bobby out a window. Panicked, Martin follows and administers CPR. The zombie arm instead crushes Bobby's chest, killing him. Martin flees the police, who believe him to be a child killer, and makes contact with the Zombie Squad, who promise to come to Norway and assist Martin. In the meantime, they ask Martin to find out what Herzog wants. After the call, the Zombie Squad is revealed to be three nerdy friends: Daniel, Monica, and Blake.

At a World War II museum, Martin meets Glenn Kenneth. After the zombie arm intimidates him, Glenn tells Martin about Herzog's history: Herzog was originally tasked by Hitler himself to wipe out the Village of Talvik for their anti-Nazi sabotage activities. As Martin realizes Herzog intends to carry out his orders even in death, Herzog and his Nazi zombies attack a group of tourists outside the museum.

After the battle, he resurrects the dead and takes a World War II-era Tiger tank. Martin and Glenn escape death by pretending to be mannequins in the museum. While surveying the carnage, Martin accidentally discovers that his zombie arm can also raise the dead. When Daniel arrives, he kills Martin's sidekick zombie; Martin demonstrates his newfound power by raising it again.

Martin, Daniel, and the sidekick zombie race to find the burial ground of a group of Red Army POWs, who ironically had been executed by Herzog during the war, as Monica, Blake, and Glenn work to slow down Herzog. Monica and Blake convince Glenn to act as bait to draw some of the zombies into a local swamp, where they kill them with pipebombs they made from the supplies they had. After shooting at them with the tank gun several times, Herzog continues on his way, believing Blake, Glenn and Monica to be dead. Meanwhile, the others discover the graveyard, and Martin raises an entire troop of Red Army undeads. All converge at the town, where Martin confronts Herzog. Martin points out that they have evacuated the townspeople and thus prevented Herzog from completing his orders, but Herzog does not care and attacks them anyway.

The battle goes well at first, but the Nazi zombies eventually overpower Martin's Russian zombies after Herzog kills the Russian Commander, Lt. Stavarin. As the Nazi zombies close in on them, Daniel tells Martin to kill Herzog, as it is their only chance. Daniel attempts to take control of the Nazi zombie's tank, Martin directly confronts Herzog, and the others fight Herzog's remaining zombies. Glenn is killed by a sneaky knife attack to the throat by an SS zombie, and Monica and Blake are about to be overwhelmed when Daniel fires the tank gun directly at Herzog while Martin keeps him distracted. Herzog is decapitated and the head goes far off into the further away mountains, and his troops fall lifelessly to the ground, saving Monica and Blake.

After they celebrate over their victory, Martin drives to the church... To where Hanna is buried, digs up her corpse, and uses his ability to resurrect, brings her back as a zombie. The two proceed to make out and have sex as the sidekick zombie looks on in the distance.

In a post-credits scene, a Nazi scientist (also hinted to be a zombie) is seen holding Herzog's still-conscious head. 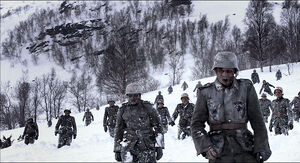 Retrieved from "https://villains.fandom.com/wiki/Nazi_Zombies?oldid=3466390"
Community content is available under CC-BY-SA unless otherwise noted.