Owner of the Chocolate Factory

Throw Rack, Shack and Benny into the furnace for not worshiping the bunny

He was voiced by Phil Vischer.

There is a ceremony that his employees will worship the Bunny Statue. Those who will not worship it will be thrown into the factory's furnace. Everybody, except Rack, Shack and Benny worships the statue, then Mr. Nezzer condemns the trio to the furnace.

Rack, Shack and Benny are tied up and they are about to be thrown into the furnace. Once they are thrown inside, Mr. Lunt told Mr. Nezzer that there are four people inside, instead of three. One of the four is a spirit All of them are not even burnt a bit. Mr. Nezzer released the three and got amazed that they did not burn. Mr. Nezzer redeemed himself for what he did.

Mr. Nezzer is a vegetable, zucchini, which belongs to the family, Cucurbitaceae. He appeared to wear business attire by having collared top, necktie and slacks. This is likely based on his position as a businessman.

Mr. Nezzer is a cruel businessman. He does not treat his workers well. He also did not teach how unhealthy chocolates are. He also had a big bunny statue and wanted others to worship it strictly and punishes those who did not worship it. 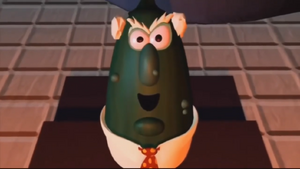 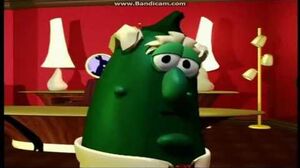 Mr. Nezzer on the Heroes Wiki