Nebula is a fictional character, an alien villain and later anti-heroine appearing in the Marvel Comics Universe. A pirate and mercenary operating in outer space, the character has frequently appeared as a major opponent of the Avengers, ally/rival of the Avengers, Nova, the Silver Surfer, and the Guardians of the Galaxy. She along with J’son are the secondary antagonists of the guardians of the galaxy.

Nebula has appeared in several other media adaptations of the Marvel comics, including animated television series and video games.

She was created by Roger Stern and the late John Buscema.

A brutal space pirate and mercenary, Nebula seized control of Sanctuary II, a massive spaceship previously under the command of Thanos. Thanos was believed to be dead at this point, and Nebula claimed that he had been her grandfather. Nebula's band of mercenaries and pirates consisted of Skunge, Kehl, Gunthar, and Levan. Nebula asked the second Captain Marvel to join her mercenary band and aid them in conquering the Skrull Empire. However, Firelord learned that Nebula had massacred the Xandarians. Nebula used her space fleet to attack the Skrull space armada and the Avengers.

Nebula then schemed to gain absolute power using Earth scientist Dr. Harker's atomic compressor to release vast amounts of energy that were absorbed by the Infinity Union (Although this attempt nearly triggered the end of the universe when the experiment caused a second Big Bang that came close to annihilating everything before a small group of Avengers, Captain America, Thor, Spider-Man and Sersi were able to escape the destruction and shut down the equipment in time to negate the unmaking of existence). She fought the Avengers, and absorbed energies from the Infinity Union through the implant in her brain. As she fought the Avengers, she lost her powers when Sersi removed the brain implant. Nebula then escaped.

The newly resurrected Thanos was offended by Nebula's claims of kinship. He reclaimed his ship and almost killed her, using the Infinity Gems. He transformed her into a grotesque virtual corpse still barely alive, leaving her as a maimed and seemingly mindless zombie, burned and disfigured by his energy beams. ﻿When he later claimed the Infinity Gauntlet, Thanos boasted that Nebula was his greatest creation, unable to die, but not truly alive either. However, when Thanos defeated Eternity and took his place, Thanos expanded his consciousness into the universe, leaving his body comatose. Nebula managed to take the Gauntlet from Thanos, using its power to restore herself to health and banish Thanos, seeking to conquer the universe herself. Thanos agreed to help a loose band of heroes defeat Nebula.

The group in question consisted of Adam Warlock, Doctor Strange, the Silver Surfer, Thor, the Hulk, Firelord, Doctor Doom and Drax the Destroyer— the only heroes that Strange had been able to locate in the time available to him. The group confronted her, and, with Thanos exploiting Nebula's inexperience with wielding the Gauntlet, she was tricked into undoing the events of Thanos's godhood and all the death and destruction Thanos wreaked with his power. The Cosmic Pantheon (which Thanos had earlier defeated) immediately appeared, and battled her. With Nebula thus distracted, lacking the knowledge to realize that they were keeping her occupied by attacking her all at once, thus preventing her from thinking of a less direct method of assault. Silver Surfer and Warlock were able to steal the Gauntlet from her by exploiting Warlock's connection to the Soul Gem, disrupting the unity between the Infinity Gems and forcing Nebula to drop the Gauntlet.

Nebula was captured by Starfox and returned to Titan for trial, while Adam Warlock claimed the gauntlet.﻿cNebula was later confronted by Firelord in the Titanian prison. In flashback, the murder of her abusive father was depicted. Nebula was later freed from prison by Geatar, and converted into a cyborg by Doctor Mandibus. She attempted to free her pirate crew from the "Anvil" space prison, but was thwarted by the Silver Surfer and Jack of Hearts. She killed her crew in escaping.﻿

Nebula has appeared as one of Gamora's followers, 'The Graces'. In this role, she battled Ronan the Accuser alongside Stellaris. Ronan triumphed, severely wounding her.

Nebula appears as a major character in the Marvel Cinematic Universe, being the secondary antagonist of Guardians of the Galaxy, the anti-heroic tritagonist in Guardians of the Galaxy Vol. 2, one of the tritagonists of Avengers: Infinity War. She also appears as one of the titular protagonists of Avengers: Endgame while her 2014 self is the secondary antagonist.

She is portrayed by Scottish actress Karen Gillian. 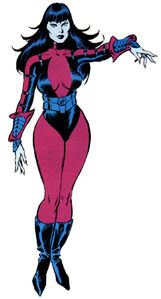 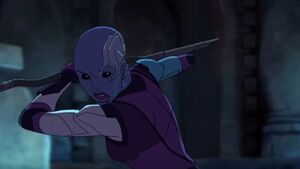 Nebula in the Guardians of the Galaxy animated series. 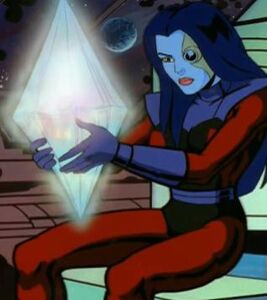 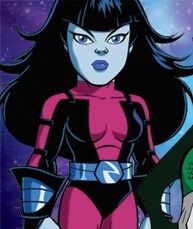 Nebula in The Super Hero Squad. 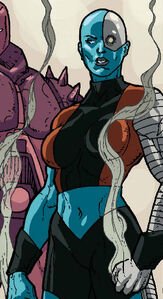 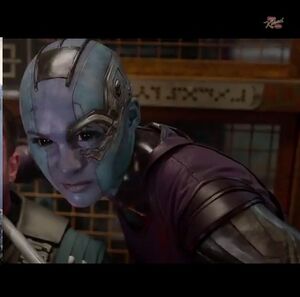 Nebula in the 2014 film Guardians of the Galaxy. 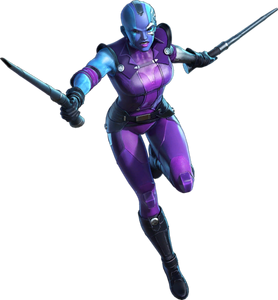