Emissary of the Gods

Consume the souls of the strongest warriors

Consume the souls of Ryu, Dhalsim and M. Bison

Necalli (ネカリ Nekari) is an antagonist from Street Fighter V. He is an ancient Aztec warrior and Emissary of the Gods with the intent of consuming the souls of the strongest warriors in order to become stronger.

In an unknown time Necalli awakened (during the 'Hour of Battle'), seeking strongest warrior to devour, he later found an Aztec warrior-priest who tried to defeat the evil being but he ended up defeated and absorbed by Necalli, the latter gained a much more human form with the scars and markings on the Warrior Prophet in his body, after that he returned to sleep waiting for a new 'Hour of Battle'.

When M. Bison created an artificial eclipse in the beginning of the game, he reawakens and began again to seek the souls of the strongest warriors, which are Ryu ('The one who agonizes to proceed on his path'), Dhalsim ('The one who serves the God of Fire') and M. Bison ('The one who fills the world with destruction').

In the epilogue, a flash-forward to the next 'Hour of Battle' reveals the prophecy being played out; as Necalli confronts Ryu and Dhalsim. However Necalli's altered form indicates the prophecy might not occur as predicted earlier.

During the fight Necalli used the Torrent of Power to defeat Ryu and forced him to transform into Evil Ryu, the transformation did not intimidated Necalli as he charged his fist towards him, but he was stopped by Dhalsim which kept him busy until M. Bison artificial eclipse released its energy and obscured the sky, Necalli saw the responsible of the event through a vision and disappeared in order to find and devour him.

When he found M. Bison, he challenged and fought with him, but his power was extremely increased by the power of the seven moons and ended up defeated, he later tried to attack Charlie Nash and the other warriors, but they managed to escape.

He reappears one final time in the Kanzuki Estate fighting Ryu who seems to have finally overcomed his inner darkness, after a long fight the latter managed to finally defeat him, upon his final defeat Necalli asked him why he can't devour him like the others and Dhalsim who teleported in the area, responded him that he must go and his soul is no longer a sacrifice for him to be devoured, upon realization Necalli melts in to the ground, returning from where he came.

Necalli is a savage and brutal person who has a distaste for humanity and man-made objects. He is quite wild but has a hidden genius within his beast like persona. Necalli is attracted to power souls and desires to devour them and become stronger. His motives are not fully understood whether he wants to devours souls for himself or the Gods he supposedly serves but is seems to take pleasure in devouring his victims. Necalli is shown to be quite arrogant and confident in his abilities as his quotes imply, however should he become angry, Necalli becomes a force to be reckoned with. He seems to also thrive on conflict and even looks to be sadistic when absorbing his victims.

Necalli has very long black hair which bleeds into dull shades of red. His hair is tied into locs which are held together by gold ringlets. He has yellow eyes and four black streaks on his face. He also has several massive crisscrossing scars covering his chest and arms. Necalli wears only a tattered white kilt adorned with a gold and brown snake patterned loincloth, a golden belt, and brown open-toed boots.

When using Torrent of Power, Necalli's appearance changes dramatically. His hair bursts loose from its bonds, lengthens, and glows bright red. The scars on both his body and face glow red and flash when certain moves are used. His skin darkens noticeably while the sclera of his eyes turn from white to ghastly black.

In his original form before consuming the "Warrior Prophet", Necalli looks like a stone based humanoid creature with ancient Aztec armor, headgear and gauntlets. The armour itself is made of leather, with gold accents and cyan colored studs embedded throughout. His skin appears to be made out of stone with cracks running throughout, while his 'blood' resembles lava. The scars that are prominent in his current form are completely absent. His hair color is seaweed green (changes to neon green when Torrent of Power is activated).

Necalli fights with a savage but effective, agile and brutal fighting style consisting of powerful throws, claw swipes, lunging and stomp attacks. He also can make small tremors to damage his foes at a distance and send them flying. Necalli's main power to his ability to devour a person's soul but his body also seem to be composed of earthly matter which allows him to transform into an acidic clay or mud which melts the ground beneath him and can move or teleport by turning into puddles. This earthly malleable body allows Necalli to physically absorb them and take on their traits by expanding his body mass and sucking them into his body by stabbing or grabbing them. Necalli also can manipulate negative energy and infuse it into his attacks or his opponent's body to increase damage but he is also capable of increasing his power using his sheer anger.

When his anger reaches its limit, Necalli will use Torrent of Power to transform into a powerful glowing form which allows him unlimited power and can utilize his negative energy non-stop. Necalli is shown to be extremely tough and powerful when facing opponents shown in Street Fighter V he took Ryu's Satsui no Hado infused Hadoken and Dhalsim's Yoga flames point blank and didn't even flinch and went toe-to toe with M.Bison's Psycho Power with his Torrent of Power and eventually was victorious. This implies his power rivals or is even greater than the Satsui no Hado and Psycho Power (However in the cinematic story mode, Bison overpowers Necalli via the Black Moons absorbing negative energy for Bison to feed on). His profile also states his talent is animal possession meaning he must be able to possess their souls and control them however it is unknown if he can possess humans. 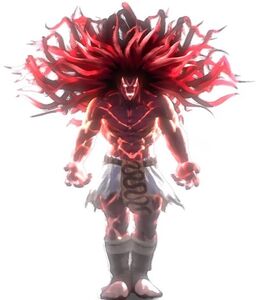 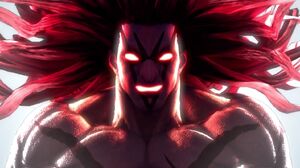 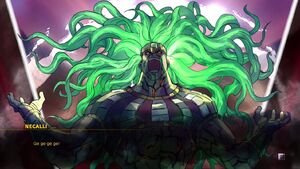 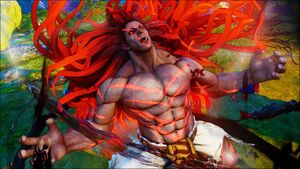 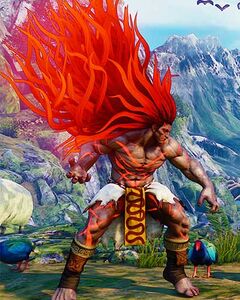 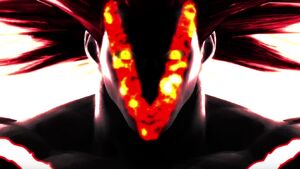 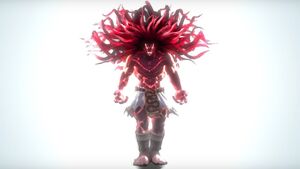 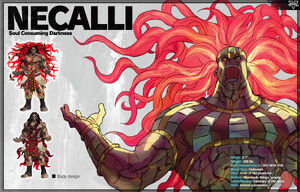 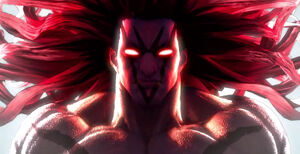 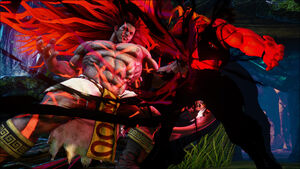 Retrieved from "https://villains.fandom.com/wiki/Necalli?oldid=3543310"
Community content is available under CC-BY-SA unless otherwise noted.