Neclord (also known as Neclord the Vampire) is a recurring antagonist in the Suikoden series, serving as one of the main antagonists in Suikoden and its sequel Suikoden II.

Neclord was originally a human before becoming a vampire. Unlike other vampires who were peace-loving, Neclord became one free-willingly in order to gain more power. He then stole the Blue Moon Rune from the vampire village forcing the other vampires to choose between life and death, whether to kill people to extend their lives or die.

During the events of Suikoden, Neclord joins forces with the main antagonist, Windy, as a chance to obtain more True Runes. After wiping out Village of the Hidden Rune, Neclord attacks North Window and zombifies all its inhabitants solely for the reason that he can use them to make his own personal army. Later, Windy makes Neclord the governor of Lorimar and he does the same thing to its soldiers as what he did to the citizens of North Window, gaining more soldiers for his army of the undead. During his time as the governor, Neclord demanded people to sacrifice him one girl a year to become his puppet bribe. One of these said bribes was Tengaar, who was nevertheless rescued by Tir McDohl, Viktor and Hix. Using the Star Dragon Sword, they were able to defeat Neclord.

This is not the end of Neclord since he returns in the sequel, and it's revealed that what they actually killed earlier was a mere duplicate of Neclord's body. Neclord returns back to North Window and starts to kidnap women who stray too close to the village. Viktor, in pursuit of revenge for what Neclord did to his home village, encounters him at the gates. Neclord revives Viktor's childhood friend Daisy and offers to revive her completely if Viktor hands him the Star Dragon Sword. Knowing that she couldn't be revived completely, Viktor is forced to slay his love interest with his own hands. Much later, after the death of Luca Blight, Neclord sieges Tinto City in an attempt to recreate his zombie army. He also abducts Lo Wen and Lilly Pendragon to be his bribes. With the help of Viktor, Riou sieges Tinto City back and manages to destroy Neclord once and for all with the Star Dragon Sword. 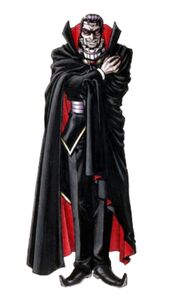 Add a photo to this gallery
Retrieved from "https://villains.fandom.com/wiki/Neclord?oldid=3885859"
Community content is available under CC-BY-SA unless otherwise noted.