Dark mistress of the Underworld

Manipulating her enemies (formerly).
Being with Leelee and Toby.

Help Octomus to destroy the Rangers and conquer the world (formerly).

Save Leelee and help the Rangers to defeat Octomus (suceeded).

Necrolai is a major antagonist in Power Rangers Mystic Force. She is the vicious and unrelenting Queen of the vampires, who can fly to and from the surface world through the gate.

She was voiced by Donogh Rees.

Necrolai is frequently disrespected by Koragg and Morticon, who often call her a "hag". She can fly and usually scouts the area for Morticon. However, Necrolai is usually is the one who brings up monsters and thinks up the schemes.

Despite all this, she does seem to fear Morticon and, to a lesser extent, Koragg, which would explain why she puts up with their behavior and rarely talks back.

it is revealed in the second half of the two-part episode "Stranger Within", Necrolai is also the mother of Leelee. She once off-handedly commented that she turned Leelee's father into a worm. She seemed to care little for Leelee, often ignoring or belittling her, and once using her as a guinea pig, shoving her into a barrier that had disintegrated three Hidiacs to see if she'd weakened it enough for an evildoer to be able to pass.

Due to her status as Queen of the Vampires, she is not adversely affected by garlic or sun light.

When Morticon fell at the hands of the Rangers, Necrolai was sent by the Master to retrieve Imperious. For some reason, she never seemed to fear the dark wizard and much more frequently questioned him, despite his initially showing himself to be quite stronger than Morticon.

After Leanbow freed the Rangers from the Underworld, the Master weakened him, allowing Necrolai to capture Leanbow and bring him back to the pit, where he was once again turned into Koragg. In the aftermath of the battle, which saw the death of Imperious and the ruination of the villains' lair, Necrolai was shown having a few doubts about her current role, but the discovery of the Book of Prophecy changed all that. Ignoring her daughter entirely, she followed the Book's instructions and provoked the Ten Terrors into attacking the Surface.

Eventually, when Sculpin discovered it was Leanbow preventing the Master's return, Sculpin hatched a plan to draw him out, and had Necrolai plant one of Sculpin's scales on him. This let the Terrors track him down and retrieve the Master's spirit.

When Itassis was chosen to punish the Surface World, Necrolai asked that her daughter be spared, but Sculpin decided that if Leelee chose to live with humans, she deserved to die with them. When Itassis, who had never sought conquest or destruction for its own sake but followed the Master's orders, was convinced not to destroy the Surface World, Necrolai was ordered to lead the Terrors to her, and reluctantly obeyed. She was there to witness Itassis being killed by Sculpin and Black Lance.

Near the end of the final episode, Itassis returned to fight against the Master, and Necrolai revealed that it was she who had resurrected Itassis (due to her showing Necrolai kindness). She further demonstrated this ability by also resurrecting Daggeron, Leanbow, and Jenji, who had been struck down earlier. Her powers exhausted, she reverted to a human form, later known as Nikki. She was last known to be living as a civilian in Briarwood, by moving into a condo with Leelee, and dating Toby.

As Necrolai, she is a sinister, cold and cunning Morlock spy that does what she wants when she wants, she somewhat pays no attention to Leelee despite being the mother, after meeting Itassis however, she is shown kindness and even begging her to let Leelee live, for which Itassis accepts.

As Nikki, she is a kind and caring woman who is friendly to everyone around her, including her daughter. 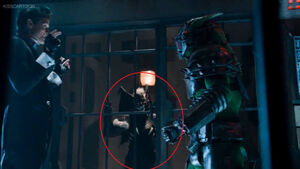 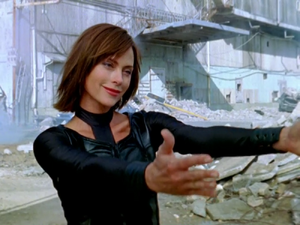 Retrieved from "https://villains.fandom.com/wiki/Necrolai?oldid=4275990"
Community content is available under CC-BY-SA unless otherwise noted.