Mune: Guardian of the Moon

Admiring himself and darkness.

Absorb the power of the Sun and bring darkness around the world (succeeded, but later failed).

Necross is the main antagonist of the 2014 French computer-animated fantasy film Mune: Guardian of the Moon. He is a former Sun guardian who fell to the dark side and Mox and Spleen's former boss.

He was voiced by Eric Herson-Macarel in the French version, Davey Grant in the English version, and Mario Bombardieri in the Italian version.

Necross was once one of the many guardians of the Sun, a powerful titan strong enough to carry the Sun through the sky on top of a massive walking temple as it moved across the world. However, during his time as the Sun guardian, Necross was infected with a feeling of power and attempted to take the Sun for himself and use its power to make himself invincible.

With the Sun in his possession, Necross cursed the world into permanent darkness, causing global widespread panic. While the citizens of the world and the Moon guardian Phospho hid in fear during Necross' reign of terror, Xolal, the strongest warrior in the world at the time, defeated Necross and smashed him all the way down to the Underworld with his mallet, ensuring Necross would never have another chance to plague the world in eternal darkness again. While Xolal became Necross's Sun guardian predecessor, Necross watched from the shadows with his two imp minions for his chance to once again steal the Sun and spread the world into darkness.

Necross, upon hearing Xoxal was stepping down for a replacement of the guardian of the Sun, sends his pale snakes, the Evil Corruptors to spread darkness in the fairest of hearts. The snakes infect Leyoon, jealous because Mune was mistakenly chosen as the guardian of the Moon instead and seeks off to Sophone, Xoxal's successor for guardian of the Sun, to tell him to scold Mune for accidentally causing the Moon Temple to mess up its orbit, allowing Necross's imp henchmen Mox and Spleen to sneak aboard the Sun Temple and steal the Sun, sending the world into another eternal night. Necross then begins to slowly absorb the energy off of the Sun into himself, satisfying himself with both power and eternal darkness.

Upon arriving at Necross's lair, Sophone and Mune distract Necross and defeat the imps while Glim revives the Sun by blowing on it, only to melt as her body was made of wax. The revived Sun and Moon restore Sophone's and Mune's magical powers, allowing Sophone to overpower Necross and Mune to send him to sleep. In the Dreamworld, Mune pulls out a massive pale snake from Necross's wound and destroys it, causing Necross to regain his appearance before becoming corrupt with envy. Cured of his evil desires, Necross passes away and joins the other former Sun and Moon guardians by becoming one with the Earth. With the effects Necross caused gone, the Sun and Moon return to their normal positions in the sky, the imps turn into flowers, and Mune rebuilds Glim.

Necross, before becoming corrupt with greed and envy, was a stone-like figure covered in moss with an opening below his left chest plate that spews a constant waterfall. After being corrupted, his entire stone body turned into molten obsidian, with the waterfall replaced with lava. 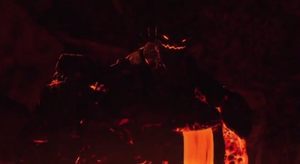 Necross explaining his plan to his imp minions. 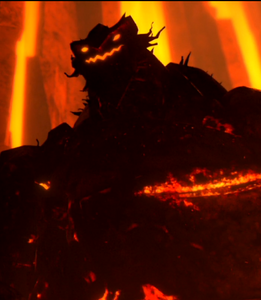 Necross holding the Sun in his hands. 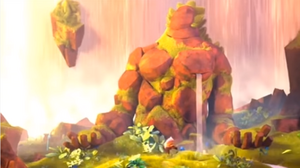 Necross's fate.
Add a photo to this gallery

Retrieved from "https://villains.fandom.com/wiki/Necross?oldid=4292482"
Community content is available under CC-BY-SA unless otherwise noted.