Ned (The Next Karate Kid)

The Next Karate Kid

Ned Randall is the secondary antagonist in The Next Karate Kid.

He was portrayed by Michael Cavalieri.

Ned is a skilled academy student with bullying tendencies (nearly the equivalent of Johnny Lawrence). He is the leader of Colonel Dugan's Alpha Elite group. He constantly tries to flirt with Julie, only to be rejected by her multiple times.

As a response to the rejections, he does whatever he can to make Julie's life miserable like getting her almost suspended from school by lying to Colonel Dugan that Julie was smoking. Later, after he sees Eric McGowen with Julie at the dance and when he sees them kiss in Eric's car, he got jealous and smashes the car windows and challenges him to a fight at the dock.

After he and the other members of his group blow up Eric's car and beat him up (ordered by Dugan), Julie and Mr. Miyagi find them and take Eric, only to be stopped by Ned who tries to grab Julie, since he had a crush on her and was angry that she rejects his advances. They both fight until Ned cheats by throwing sand at in her face. Despite the disadvantage, Julie manages to defeat him and turn her back on him in disgust. When Colonel Dugan orders Ned and the others to fight Julie, they all refuse and abandon him. 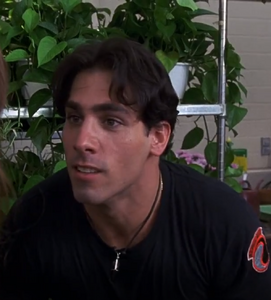